Hearthstone's powerful Undertaker minion card to be nerfed by Blizzard

28 January 2015 | By Nick Horth
The dreaded Undertaker, one of Hearthstone's most infamous minion cards, is being nerfed by Blizzard after months of fan complaints.

Why is he so hated? Well, whenever you summon a minion with the Deathrattle ability, the Undertaker gains both one attack and one health. Keep doing that over and over, and Undertaker grows into a real beast of a card. 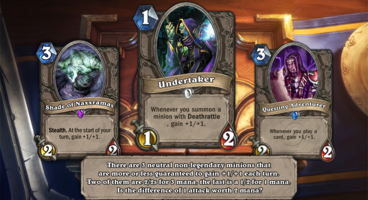 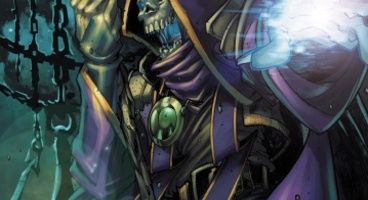 When the patch finally goes live, summoning a minion with Deathrattle will only gain you one attack, rather than the extra health as well.

“Undertaker was frustrating to play against,” Blizzard explains. “It often gained both Attack and Health stats significantly above those of other inexpensive minions very early in the game. With this change, we expect Undertaker will still be better than other 1-Mana minions when played in a deck with a Deathrattle theme, but more likely to die in combat against other minions.”

The golden version of Undertaker can be disenchanted for its full cost for a limited time after this change goes live, which should assuage those who enjoyed exploiting his ability. A tiny bit. It's a last resort from Blizzard, who generally prefer to add more cards and variations in order to counter powerful combos rather than nerf heavily.

There's no word on when the next patch will go live just yet.