Minecraft Can Handle 16K, But Don't Expect To Be Playing Your Favorite AAA Blockbuster Like That For A Long While 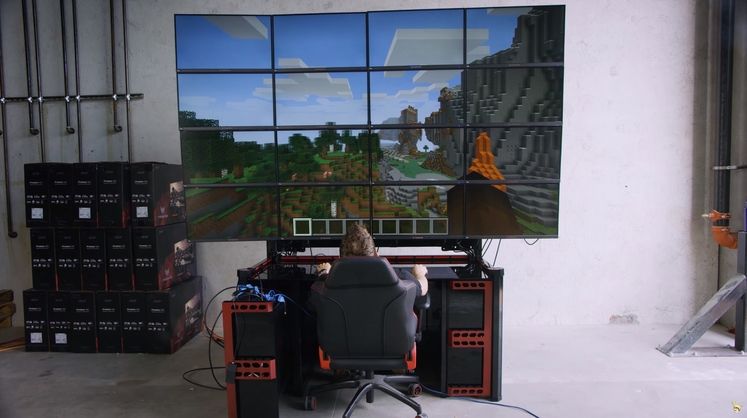 If we take Steam's hardware survey into account, just about half of all PC gamers are still gaming at 1080p - a precedent that started to become the norm around 2006-2008. The 'next gen' point of PC gaming was when players hoped to make the incremental jump to 2560x1440 or '2K' resolution. From there, 3840x2160 (4K) has been the big talking point, yet only 0.86% of the Steam userbase are reported to be pulling that off.

From there, we're looking at 8K. But a consumer 8K panel will, right now, cost you about $5000 and requires two monitor connections to pull off at a standard 60Hz rate, which isn't exactly ideal for a gaming rig. Considering most video cards still struggle to maintain an acceptable framerate in big-name games at 4K, anything above that is more or less out of the question unless you have endless cash reserves to pump into multi-GPU arrays.

Through the power of PR relations and millions of potential viewers, however, popular PC techie Linus Tech Tips managed to convince Acer to throw 16 4K monitors his way from some good ol' fashioned experimentation. The rig was set up alongside a fancy desk-based PC case in a prior video, but his latest upload has him actually attempt to run a games at the monumental resolution of 15360 x 8640 (16k) while enlisting Nvidia's help to solve the multi-screen sync issues and bottlenecks of consumer GPUs.

Running via 4x Nvidia Quadro P5000 GPUs (valued at around $2500 each), these are never marketed as gaming-grade GPUs - but the amount of VRAM they offer up make them the best choice in a situation like this. Unsurprisingly, however, they're still not enough. Although Minecraft managed to run between 40-50 FPS at 16K, big blockbuster titles like Rise of the Tomb Raider or PlayerUnknown's Battlegrounds couldn't quite hack it. If you're hoping to run some 16K Half-Life 2, however, the set-up proved more than capable.

Linus enjoys pushing the envelope and getting into the nitty gritty of PC tech, and his latest video shows just how far away we are from really enjoying higher resolutions. 4K is still many years away from becoming the standard, so we can't see 16K being plausible for a long, long time. Especially when pixel density on smaller screens begins to reduce the effect, anyway. Still... it's certainly impressive.