The Skaven are the 4th Playable Race in Total War: Warhammer II, all details and trailer inside! 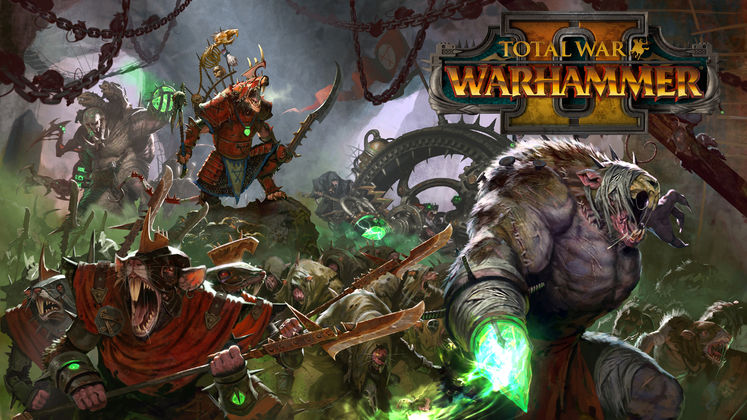 Since the first trailer for Total War: Warhammer II showed a rat tail at the end, the internet predicted that the fourth and final race for the second part of Creative Assembly’s Warhammer strategy trilogy would be the Skaven, the rat creatures of the Under Empire. Today Creative Assembly have finally let the rat out of the bag. The Skaven join the High Elves, Dark Elves, and Lizardmen as the fourth faction in the game. Trailer and all details are below.

Everything we know about Total War: Warhammer II!

An Interview With Creative Assembly's Andy Cole and Mark Sinclair on the game!

The Skaven play a little differently to other races, and in our opinion are consequently the most fun because of those differences. They hate each other as much they hate other races so are constantly betraying one another, meaning if you’re going to make it as a Skaven Lord you’re going to have to lie, cheat, and backstab others before they do the same to you. And that’s just your own side. You’ll have to fight off, buy off or pretend to get along with other Skaven factions as much as you will Elves or Lizardmen.

Being rats, the Skaven are under-dwellers, and so in the game most of their own settlements are underground and appear to other races as just ruins. Unless an enemy or hero specifically pokes around in these ruins these settlements can remain hidden until the Skaven forces sudden pop out and attack. On the battlefield the Rat Commander can summon a pack of Clanrats anywhere on the map with a cooldown ability called ‘The Menace Below’, which can easily turn the tide of battle. 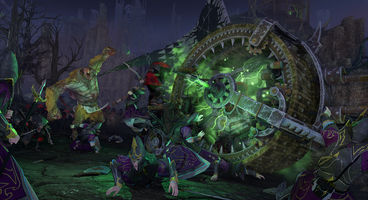 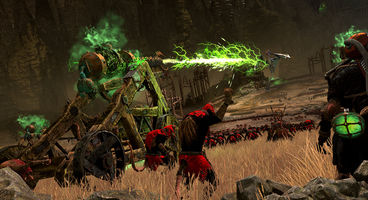 Their main specialization is in overwhelming the enemy with sheer numbers, so most units are weak but cheap and are mostly made up of slaves. You really have to bide your time with the Skaven, slowly building up your forces in secret before attacking en masse. Rat Ogres are particularly fun, bashing smaller units across the field, but unlocking technologies such as the Lightning Cannon and Doomwheel almost turns the game into damn Command & Conquer – the Doomwheel is better at ploughing through enemy units rather than attacking, like tanks in C&C!

Their main resource and care is actually Food, so make sure you have lots of it available otherwise your treacherous underlings might revolt quicker than usual. If in doubt, just mince up a few of the local population. It’s the Rites that are the most interesting though. These are campaign-level mega-spells that each side has access to, basically the superweapons of Total War: Warhammer. The Skaven have their own unique Rites, including the ability to summon powerful Heroes, spread disease in a local population, and our personal favourite, “The Scheme of DOOOOOOM!”. This summons an earthquake which can level a city instantly, which is awesome, and yes it is spelt like that. Yes, even the exclamation mark. 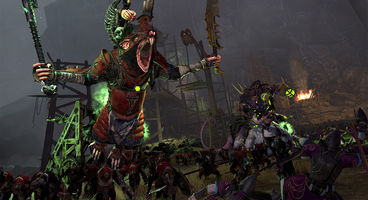 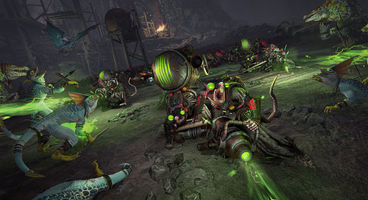 The Skaven were revealed to us at a special event held at a sewage works in London, which made sense the second they showed us the old Victorian plant with Skaven banners draped around in, creating both the most steampunk and the most Warhammer place on Earth. We even got to try out a warwheel, although that was sadly stationary.

The most important part apart from the reveal was that we got to play a few hours of the game, specifically the Skaven campaign, and also interview a couple of the team from Creative Assembly. They’ll be coming tomorrow, so stay tuned to GameWatcher – we’ll even have some tantalizing hints about Total War: Warhammer 3! Maybe.