Now that the Skaven is out of the bag, it's time to start summarising what we know of Total War: Warhammer 2 and its myriad races. With the original Total War: Warhammer debut, Creative Assembly expressed a desire to include all 15 of the wargame's major factions with the hopes of bringing in minor ones, too.

We Now Have Word Of A Sequel, But How Good Was The Original? Michael Investigates With His Total War: Warhammer Review

With various races being added in through DLC packs further down the road, it was never really clear whether the base game would recieve more or whether the teams would just move straight onto a sequel. We're still not entirely sure whether the races of the last game will carry into the Total War: Warhammer 2, but what we do know is that the 4 races thought to be included from the get-go most certainly will be. 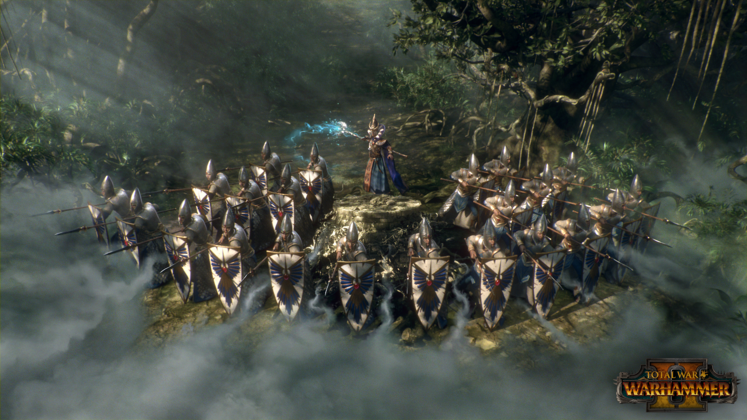 These righteous folks are the first we're introduced to almost as soon as the trailer begins to roll. Marching forward through the forests to escort their leader - Teclis - to nearby alter, we're introduced to the frontline infantry force of their race and their tall bulwarks. With one poor soul taken two crossbow bolts to the face and torso from the encroaching Dark Elves, his quick-thinking ally quickly shields himself from the raining arrows with his aegis.

The rest, acting in response, move forward and create a Shield Wall behind the leader's quickly erected magical barrier. 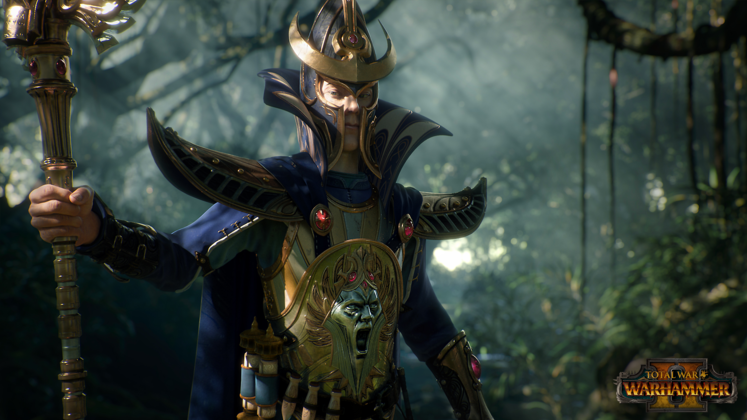 Once the Dark Elf threat has been countered by the Lizardmen swooping in from the West, Teclis removes the barrier immediately causing the beasts to notice their presence - suggesting it was a type of cloaking magic. Teclis orders his sword-wielding warriors to charge, and we're given a birds-eye view of the battlefield.

Teclis is likely to be our first Legendary Hero character with the magic he pulls off at the alter seemingly offering up some kind of future-sight in which we see the High Elf leader casting a powerful spell in a broken world. 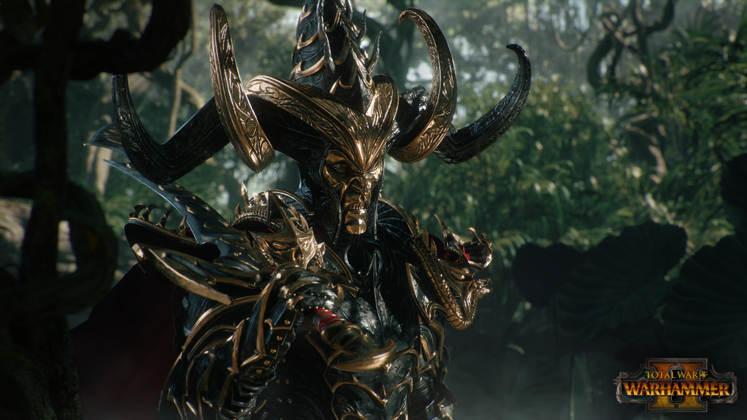 Technically shown off lightly before teh High Elves, we're introduced to these shadowy beings by way of their crossbow-wielding Scouts.

As they march forward toward their vantage point against the High Elves in the distance, the 'Witch Elves' scurry across the trees as they escort their ruler - Malekith - through the dense woods. Matching up well to their tabletop counterparts, they're seen holding their signature poisoned twin-daggers. They don't last too long, however, as they're quickly picked off by the rampaging Carnosaur as the Lizardmen stage their surprise attack.

Whereas Teclis - Leader of the High Elves - employs a staff, Malekith is seen wielding a longsword befitting of his sharp armour. We're not given any special insight into his possible powers within the trailer itself, but his history of black magic and attempts to subjugate the High Elves will likely offer some hint as to what to expect 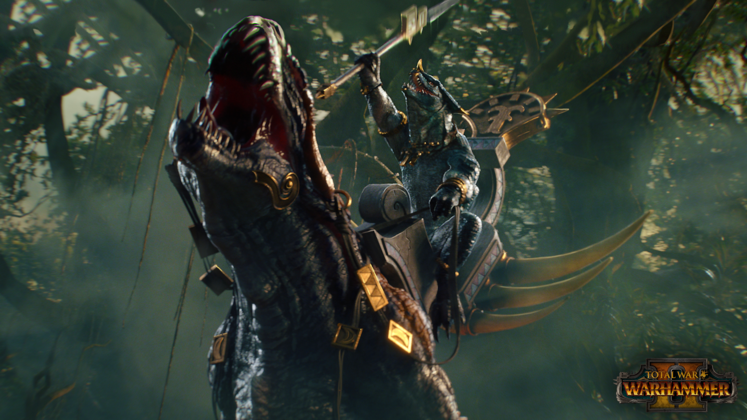 Offering up a surprise attack in a brawl only meant for two sides, the Lizardmen interrupt the Dark Elves attempts at claiming Ulthuan by sending in their massive Carnosaur to pick up and and stomp all over the Witch Elves attempted to sneak up on their enemy.

Noticing the nearby High Elves as Teclis removes the barrier keeping his army safe, the Carnosaur and its rider turn to signal an attack from the sword & board toting infantry lying in wait with some bulkier looking brutes strolling in after. 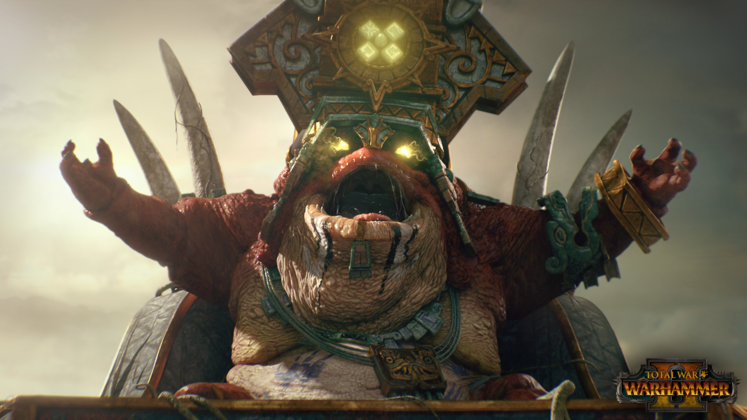 As the camera pans up from these mean looking lizards, we're introduced to their leader Mazdamundi floating above his people ready to dish out the orders. You won't be landing a hit on him with your melee weapons, that's for sure.

Making a surprise, but more than welcome, appearance in the last few seconds is what we can only suspect to be the Skaven. A potential branch of the Beastmen that have plagued the Warhammer world throughout history.

For those who've fought against them in Warhammer: End Times - Vermintide, you likely know what to expect here. The sheer scale of their army mixed with their rapid rates at refilling their ranks and being able to retreat to their underground lairs without a trace make the Skaven threat a real cause for concern.

They may not be the biggest, but they're ruthless in their attacks and can quickly overwhelm with their numbers alone. We're only seeing a general sewer rat in the trailer, but it's glowing eyes suggest its grand mutation is taking effect.

With Total War: Warhammer 2 being announced within a year of the first game's release, a backlash was likely expected. Fans had been paying for new races on top of the base game for the last 12 months and they were right to worry about what that meant with a sequel on the way so suddenly.

Thankfully, there's not too much to worry about. Players of the original Total War: Warhammer will be taken care of with the sequel. Since its inception, Creative Assembly outlined their plans to eventually have upward of 15 playable factions available to its players with additional minor factions making a fair appearance. So, with that in mind, releasing a sequel that would void their efforts from the past game wouldn't make much sense.

The campaign may not mean much for the races of the original game, but you'll be able to carry out that grand skirmish once the Warhammer world is stitched back together. 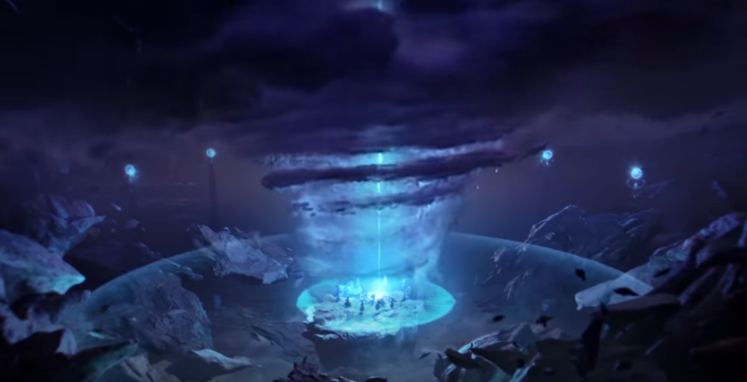 Much like how the original played out, Total War: Warhammer 2 will tell the tale of war across one of the Warhammer universe's 4 continents. In this case, we're traveling to the home of the 3 main races uttered above fight over the Great Vortex - a whirling well of power.

Being a power that's swirled within the land across the millennia, so too have the races of Ulthuan fought over what they stand to gain by capturing the mysterious force. And that's exactly how the campaign between the races will pan out.

As we've seen in the trailers already, the High Elves once approached and attempted to access the Great Vortex before the nearby Dark Elf and Lizardmen forces ambushed their efforts. Where the Skaven will fit into this is up for debate, however. They make a very convincing appearance toward the end of the trailer; yet they've never really been too interested in strategic maneuvers other than emerging from their tunnels, wrecking the opposition in a surprise attack and vanishing back from where they came.

Unless we're talking about The End Times, at least.

Much like any other Total War game that's come before it, Total War: Warhammer 2 has players control the entire army of their chosen race in both turn-based and real-time strategy environments.

Once a campaign has been started, it's up to the player to assume a commanding role within the army using the map screen to move their forces in turn-based fashion before delving deeper into each squadron as battles break out between them.

Once this happens, battles become a real-time affair similar to other real-time strategy games where squads and units can in individually broken up and controlled to tackle the threat of another race. Higher-class units like Generals and Legendary Lords can make use of signature abilities on command that, when used in the right context, can drastically turn the tide of battle.