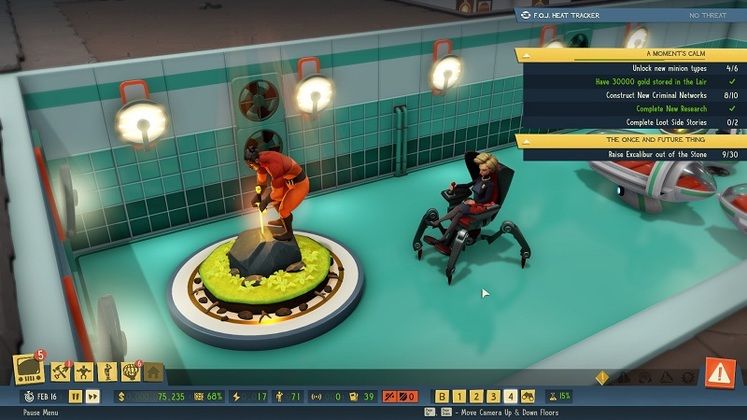 The path to world domination in Evil Genius 2 is paved with quite few side stories, some of which are centered on retrieving various loot items. The Once And Future Thing gives you the chance to steal the famed sword Excalibur and keep it in your lair so that both your minions and intruding Agents can bask in its stone-locked glory.

The Once And Future Thing side story only appears in your Objectives menu after you've gone through enough of the main story. You get a hint that a peculiar sword-in-a-stone waits in H.A.M.M.E.R. territory. Since it's a generally bad idea to let your enemies have legendary weapons, the first step is to steal it through a Scheme on the world stage. 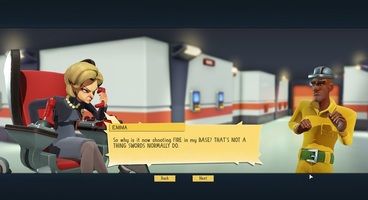 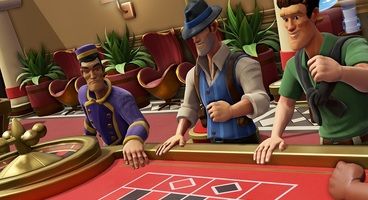 To access it, you'll need a level 2 Criminal Network in the Western H.A.M.M.E.R Districts. The Scheme itself is nothing special, requiring a handful of workers and specialized minions to complete. Once that happens, you'll feel predictably tempted to pull the sword out of the stone.

If this is your first loot side story, you might be met with a modicum of confusion, as were we. The sword is nowhere to be found in your lair or cover operation. Similarly, there is no new scheme to make it magically appear within your reach. The icon next to the objective itself is identical to the home on the Return to Lair button, but that's not particularly illuminating.

What you actually need to do is open Build Mode and go to the fourth tab, conveniently labeled Loot. There, you’ll find the item named Sword in the Stone, which you can place in your lair for free. You can put it down in any room that has space for it. I picked the Infirmary for very valid reasons that will remain undisclosed for the time being.

Select the sword and click the Raise Excalibur button to have a minion run over and attempt to pull it out of the stone. You didn't expect your Genius to do it themselves, did you? After putting in a decent amount of effort, the sword remains still very much stuck in the stone but will also catch fire – likely a protective curse – as will small patches of your base. Ideally, you'll have placed several extinguishers around your corridors by this point.

With your lair spontaneously catching fire, it's best to jump straight to the next objective and steal the Acid on the world stage. This is also done through a Scheme, found in the same region, that requires 4 Workers, 4 Scientists, 6 Guards, and 20 Intel. After it’s complete, you’ll need to defeat 3 enemy agents in the lair. For us, some showed up immediately, so it was only a matter of targeting them.

You’ll then give raising Excalibur another shot, with good old acid helping out with the stone. That’s the final step in The Once And Future Thing side story. The sword will then remain in your lair, largely in the same state as it was when it arrived, just minus the whole fire thing.

Mine acts as a symbol of heroism, bolstering the resolve of minions recovering in the Infirmary after battling the Forces of Justice. It is not a randomly placed prop that ended up there because I'm utterly incompetent at planning out my rooms and I will fight (over the Internet) anyone that says otherwise.

Evil Genius 2 is out now on PC. Here are our guides on Global Operations and the High on the Hog side story.