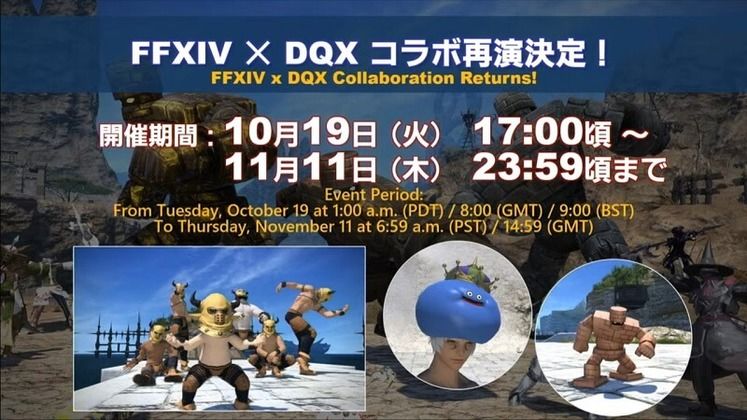 Publisher and developer Square Enix has announced the start and end dates of FFXIV's Breaking Brick Mountains event 2021. The MMORPG's Dragon Quest X collaboration event will go live in October, alongside a set of exclusive rewards.

Much like A Nocturne for Heroes, FFXIV's Breaking Brick Mountains event has an irregular schedule, which makes knowing its start and end dates important for all the item collectors out there. After going live twice throughout 2014, the Dragon Quest X collaboration event took a break until 2020, making this year only the fourth occasion to obtain its rewards. 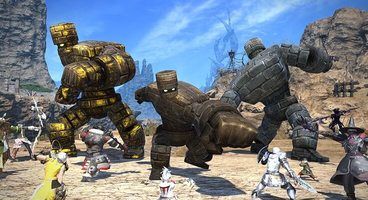 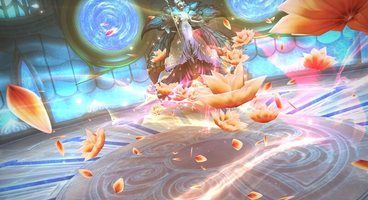 The FFXIV Dragon Quest X collaboration event 2021 doesn't seem to have any entry requirements, at least according to its special site, which is now live. Past iterations allowed characters of level 7 to participate in their lowest level FATEs, while a level 30 character could play through everything.

To kick things off, you'll want to head to Ul'dah at the Steps of Nald, and interact with the NPC called Havak Alvak, which waits at coordinates X:12.1 Y:8.2. You'll then need to talk to the Beefy Businessman found near the Thaumaturges Guild (use the Aetheryte Shards to travel quickly across the city).

The Beefy Businessman will then task you with participating in the event-exclusive FATEs Brick by Brick, Brick by Stone Brick, or Brick by Gold Brick, which are spread across several of Eorzea's locations, as follows:

Taking part in Final Fantasy 14's Dragon Quest X collaboration event impressive can get you the Thug's Mug helmet and Wind-Up Brickman minion as rewards once you complete one FATE and return to the Beefy Businessman.

In addition, you can also purchase the King Slime Crown for 57 Gil from an NPC called Toughie, which you can find in Ul'dah, near the Thaumaturges Guild Aetheryte, at coordinates X:8.2 Y:12.2.

The FFXIV's Breaking Brick Mountains event 2021's activities can only be completed while it's live. If you've participated in the past but haven't seen it through to its end, you can pick up from where you left off.

If you've already played through all of its content but want to give it another go, you can do so using the Seasonal Event Replay feature, which you can access by talking to Havak Alvak, albeit without obtaining any additional rewards.

Final Fantasy 14's consistent stream of limited-time events pave the way to the release of its upcoming Endwalker expansion, which goes live on November 23.