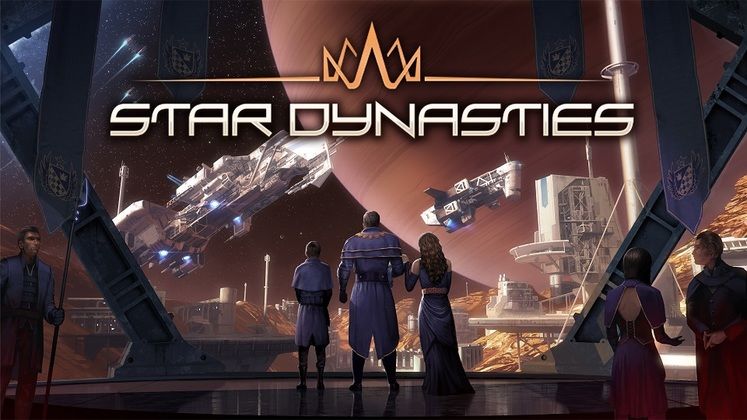 Star Dynasties is a role-playing sci-fi strategy game, developed by Pawley Games under the Iceberg Interactive banner. It takes the space feudalism tropes found in sci-fi classics, such as Dune and Foundation, and brings them into a package focussed squarely on character driven interactions and procedural narrative.

The game is set during an interstellar dark age: after the inadvertent destruction of Earth. Lacking the infrastructure and resources needed to support themselves, the various human colonies in existence, have collapsed. The political, technological, and economic advances made pre-Earth’s destruction are lost and local feudatories arise—setting the stage for your noble house to engage in the human drama and feudal politics of the age. 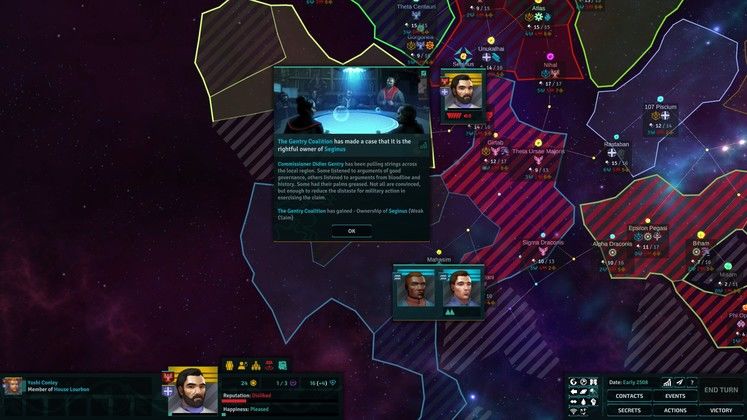 Star Dynasties was conceived by developer Glen Pawley’s desire to better represent the human element within strategy games. It’s a melange (no, not the spice), of the dynastic driven gameplay found in Crusader Kings, wrapped in a turn-based strategy shell, with a smattering of RPG and choose your own adventure elements. As Glen explains,

“I love turn based empire management games, and the original spark for the game came from the desire to add a more realistic human side to Civilization. In choosing to focus on that aspect, I’ve taken inspiration from roleplaying simulations like The Sims, King of Dragon Pass and Crusader Kings; and choose your own adventure-style games such as Nation States and Reigns. In understanding how complexity creates emergent narratives, games like Dwarf Fortress and RimWorld have been instructive.” 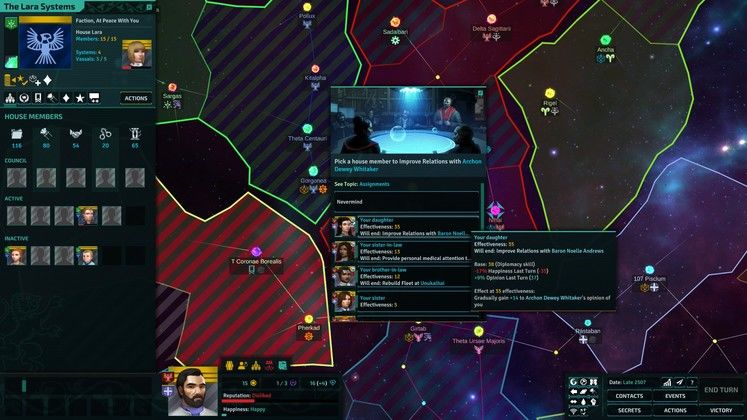 Yet, despite the hodge-podge of influences and genres, Star Dynasties remains surprisingly focussed. Even in Early Access, the game has a clear direction and keen sense of what it is trying to achieve.

So how does it play?

Each turn, you conduct a series of actions. Each action costs an amount of action points, which constitutes the main resource within the game—credits/money being the other. There’s an impressive number of actions available to the player, covering both the concerns of state and personal affairs: from demanding your liege-lord press your claim to a system, through assigning a personal medical aid to an ailing member of your court. Yet, despite the considerable number of options available to the player, navigating what can and can’t be done within a given situation is straightforward, given the intuitive UI. 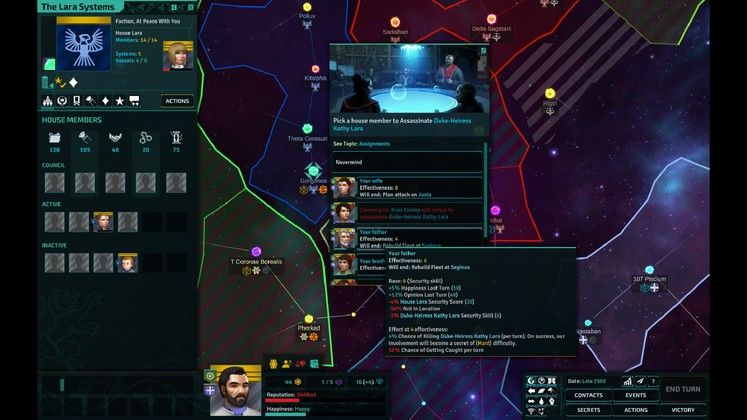 Similarly, the calculations used to determine the likely outcome of any given action, together with its impacts on the game world, are clearly displayed via tooltips. If you try to assassinate a character you can see the chance of success, the chance of getting caught, how difficult it will be to cover up the crime and keep it a secret, and how these numbers are arrived at. Click on a character and you can see how their opinion of you is determined, how your actions towards one character have an impact on another.

The game adds another layer to these player interactions through its justice mechanic. Similar to a chivalric code, the justice system constitutes a set of social and political norms that govern society within the game’s setting. For example, it is expected that appointments to the court council are made for life. It is also customary that a ruler’s spouse sits on the council. Fail to adhere to these traditions and your reputation with other characters gets a negative modifier. The justice system is detailed enough to warrant its own tab in each character’s profile; showing the grievances committed against you, those injustices you are accountable for and those people who owe you favours for various promotions and noble deeds. 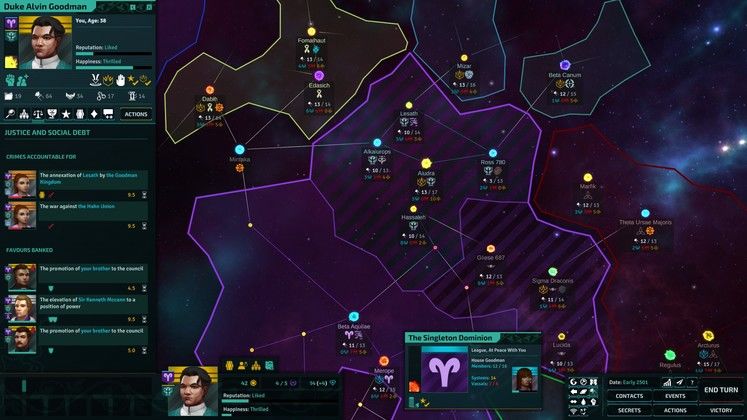 Indeed, Star Dynasties does a great job of tying these mechanics to the game’s underlying setting. Population controls are explained as the result of lacking the technological know-how to improve existing life support infrastructure. Consequently, each great house can only have a limited number of family members. If you go over this limit it is seen as an unfair allotment of the colonies limited resources and impacts your relations with others. It also means that, as the leader of a faction, family members must be granted permission to try and fall pregnant.

It’s an interesting set of mechanics, that helps develop the game’s setting whilst also helping to balance gameplay. As ultimately, characters become a kind of check or gate on a faction’s power. This is because many actions require a character to undertake a mission on behalf of their house—with their stats impacting the chance of success or overall effectives of the given action. If you want to improve relations with a foreign power, you need to send one of your characters as an envoy to the targets home system. If you want to plan an attack on a system, you need to assign someone to oversee the operation. It means there are only so many moves you can make and only so many issues you can focus on at any given moment. 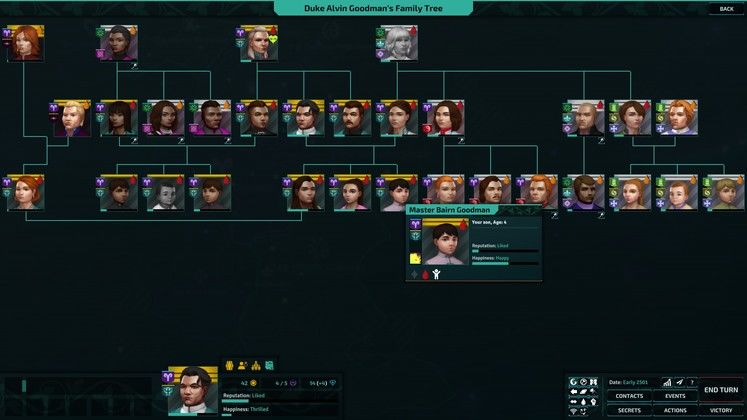 With such a heavy emphasis on characters and character driven actions, an emergent narrative begins to evolve. As each turn passes and more actions are taken (by a myriad of characters), a web of intrigue, injustices, and heroic deeds unfold. A vassal switches allegiance to a rival house, a strategic marriage nets you a claim on some new territory. An enemy house imprisons one of your faction members whilst on assignment in their territory. Each of these events is logged and its impacts on your relations with others is tracked.

For an Early Access game, Star Dynasties feels refreshingly further along the development lifecycle than other titles. It’s stable, it has a clear and functional UI, a tutorial, and its major mechanics seem to have all been implemented. It’s almost as if the developer is using Early Access to garner feedback, refine the gameplay and implement balance changes—rather than offer customers a proof of concept and a promise to deliver a game at some point in the future. 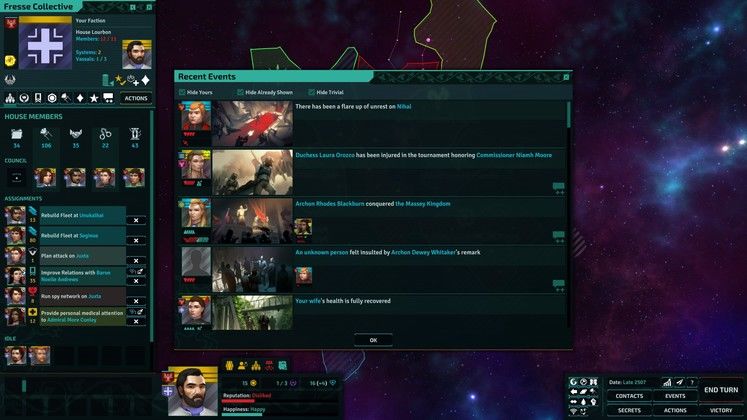 If there’s one concern I have regarding Star Dynasties, it’s the fact that the game has focused almost exclusively on character interactions and narrative. This has ultimately left the game lacking in any deep empire management aspects. When I asked the developer about this design choice, he explained that he didn’t want to dilute the game’s focus on narrative.

“My design principle has been that the empire management mechanics are there as a way of supporting the procedural narrative. What’s most interesting about battles in fiction? It’s who won, who was brave, who was injured, who honored their alliance and joined the fray, who betrayed their commander. I’m not criticizing games with complex combat mechanics, I enjoy them as well, but with Star Dynasties, I wanted to focus on the narrative elements of empire management.” 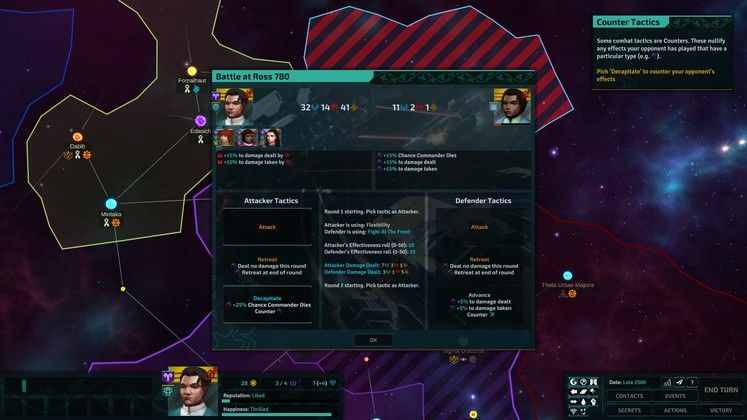 Glen admits that this has been a challenging design choice and that he has had to rework some aspects of the game following player feedback: obtained during the game’s closed alpha. This has primarily resulted in a set of deeper combat mechanics, which play out like a board game, with phases, die rolls and combat abstractions.

To be fair, Star Dynasties does not bill itself as a 4X game. In fact, it specifically states that it encompasses a ‘light empire management’ layer. What this means, is that there is no technology tree to unlock and no colonisation of new planets. And whilst this makes sense lore-wise, given the current dark-age, it personally felt a little strategically barren. There’s no buildings, no industry or resources to manage, no economy to tinker with—outside of setting taxes to low, medium or high. There’s no ship design and only three abstracted ship types, fighters, bombers, and frigates. 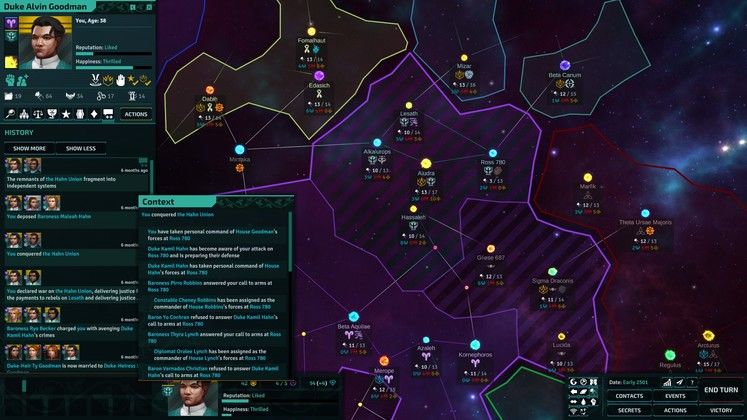 The lack of any deep strategic layer is not an inherently bad design choice, in-fact some may see this as a streamlining of the micromanagement found in other titles. However, if you were expecting Star Dynasties to combine the empire management aspects of games such as Stellaris, Galactic Civilisations or Endless Space, with the character driven drama of Crusader Kings, you will likely be left disappointed. Star Dynasties is unashamedly a game about characters and their relationships, and yet, if you are okay with this, its worth checking out as it heads into Early Access.

If the concept of playing from the perspective of a character (rather than the invisible hand of the state), appeals to you, then you may also want to check out our exclusive preview of Alliance of the Sacred Suns. 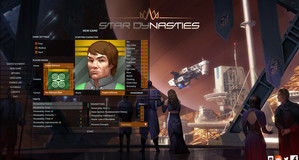