Act of Aggression is clearly positioned as the old-school alternative to the large-scale strategic decision-making of Eugen Systems’ recent work on the Wargame franchise, a fast-paced and bombastic ode to the classic age of the RTS. Anyone familiar with the base-building and explosive combat of the Command & Conquer series will feel right at home here, though Eugen has a few tricks up their sleeve to keep things fresh.

Eugen is clearly enjoying the opportunity to go full Tom Clancy with Act of Aggression, which sketches a pot-boiler, techno-thriller plot full of shadowy cabals, dastardly hackers and deadly future tech. The US Army is the most traditional force out of the three playable factions, relying on brutal main battle tanks and combined arms operations. They’re up against the Cartel, a league of multinational hackers and criminals – think Anonymous by way of HYDRA. The Cartel has a focus on stolen technology, and most of its armour can fulfil a number roles in the field. Cartel battle tanks, for example, can be upgraded to carry anti-armour, anti-infantry and anti-air weaponry all at once. The Chimera, representing the United Nations, appear to favour stealth tech and advanced prototypes. 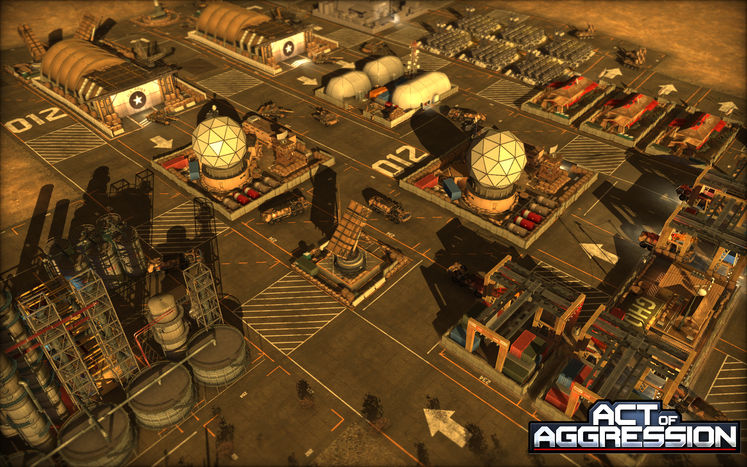 Lots of variation between those three factions then, and lots of entertaining pyrotechnics when they meet on the field. Act of Aggression does a good line in action-packed combat, with some very pretty explosions and weapon effects. Two lines of battle tanks crashing into each other while helicopters are blasted out of the skies above and artillery barrages churn up the earth is a deliciously over-the-top action movie riposte to Wargame’s more distanced, strategic combat.

Each unit has a bunch of customisation options. We saw the US army in action, whose gear feels the most immediately familiar. They rely on sturdy Abrams tanks and versatile APCs, the latter of which can be outfitted with anti-missile and infantry gatling turrets, anti-armour TOW launchers, or a bunch of other useful toys. All this slots neatly into the traditional RTS rock-paper-scissors model; rely too much on anti-missile vehicles, and you’ll be stumped when a line of battle tanks grinds over the horizon. Quick reactions and on-the-fly planning are what’s needed here, as well as co-oridnated use of your forces. Eugen Systems’ co-founder Alexis Le Dressay was on hand to demonstrate the tactical options by simulating a fight between a US force and some Chimera stealth tanks; initially the Americans couldn’t even see the enemy, and were taking horrendous losses, but the arrival of a short-range recon chopper relayed their exact location. A violent exchange of fire later, and the US convoy rolled on through. 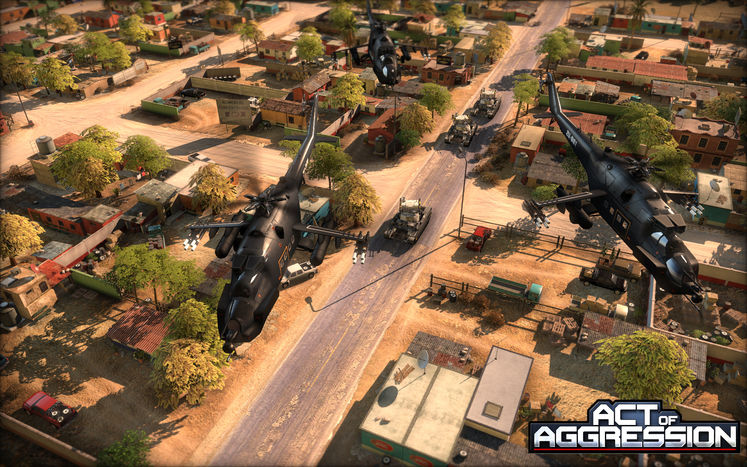 Base construction is kept relatively simple. From your starting position of one HQ and one harvester, you’ll slowly spread out, plonking down new power stations, barracks and defensive structures as you need to. There are issues RTS fans will be used to dealing with – hugely productive power silos that have the nasty habit of exploding and wiping out your base if attacked, for example – but most of the challenge involved in constructing a productive base comes from reacting to the supply situation. You need to keep a strong defensive setup, while expanding to claim valuable goods scattered across the map.

Resource locations are randomised on each map, which means you’ll have to do a bit of scouting before sending out your refinery trucks. Eugen hopes this will make the early game a little less predictable on each map, and encourage skirmish cashes over contested resource zones. There are several different types of resource to worry about; aluminum, petroleum, electricity, and rare earth elements, each of which is used to construct your special units. Run out, and you’re forced to rely on those few units that can be bought solely with cold, hard cash.

Talking of cash, here’s something neat. Basic infantry might initially seem outmatched by all the high-tech, show-off gear on display, but they do have one unique ability that no other unit has – they can capture prisoners of war. Defeat another squad of troopers, or round up enemy tank crews after you’ve gutted their vehicle, and you can send your captives off to a military prison. Captured prisoners earn you cash, so securing them becomes another valuable revenue stream. You can even outfit you troops with advanced non-lethal weaponry to increase your capture rate. It’s a nice little sub-system to think about that’s not essential, but could just swing the tide of battle in your favour. 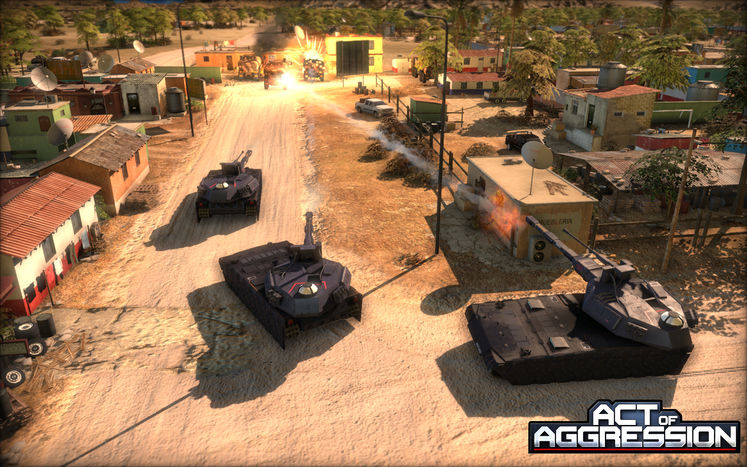 Once you hit the end-game, both armies will start ramping up their super-weapon construction. From here on in resource-gathering is even more important – battles become a kind of amped-up arms race, as each player tries to swamp the other with his biggest weapons. You can set up anti-nuke missile batteries, but these are expensive and only defend against a few threats at a time. Eventually one will get through, and that’s pretty much you done for I’m afraid.

It’s been a while since we’ve had a really good traditional RTS, and from what I’ve seen Act of Aggression looks like it could fill that gap in the market nicely. It’s as fast and furious as classic Red Alert, but it also manages to channel some of the more thoughtful strategic elements from Wargame, without bogging you down in excessive micro-management. Le Dressay tells me that Act of Aggression is set for a VIP beta early this year, with a full release planned for May. Take note, RTS fans.

Most Anticipated Feature: I’m a sucker for unit customisation, so I’m looking forward to digging much deeper into all the potential options. 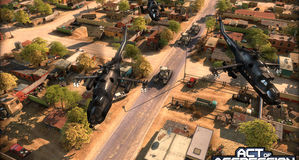