Space Marines and their over-sized (overcompensating?) weaponry might get all the headlines, but for the really spectacular battles of the forty-first millennium, you have to head into space. Here gargantuan cruisers fling skyscraper-sized missiles at each other, launch hideously devastating broadsides, and when all else seems a bit too boring, smash themselves prow-first into the enemy formation and spew forth boarding craft like a swarm of wasps. Welcome to Battlefleet Gothic: Armada, an adaptation of Games Workshop’s classic spin-off boardgame that’s going to bring 40K’s brand of eternal war to the stars sometime next year.

First things first, and this might disappoint a few people; the game takes place in just the two dimensions of movement, so there’s no Homeworld-style jumbles of chaos as ships zoom under and over each other in a frenzied killball. No, a battle in Armada plays out in straight lines, more like a naval encounter than a space dogfight. Facing and timing are key; missiles take time to cross the void, so you need to either pick your moment carefully, or throw caution to the winds and get up close to the enemy formation. At which point you’ll probably get yourself rammed or boarded by an ork cruiser. Yep, there’s room for the less subtle approach. 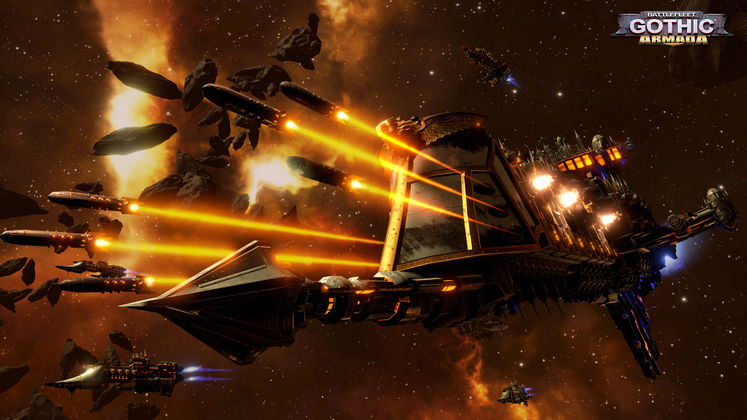 Controlling several different ships all moving and shooting at the same time is obviously going to be tricky. Luckily, if you lack the twelve hands that professional RTS players require, you can make use of a neat little AI system to take some of the micromanagement off your hands. You’ll always control your admiral’s flagship directly, but everything else in your armada can be issued a series of AI instructions to determine how they approach each engagement.

Before a battle you’ll enter the deployment phase. Here you can set a stance, a range and a level of disengage for each ship in your fleet. Say you want your destroyer to make an aggressive assault on the enemy. You pick the ‘aggressive’ stance, select ‘close’ required range, and if you’re feeling particularly ambivalent towards your underlings’ safety, set them to never disengage, even If they’ve taken horrific damage. Jump into the battle, and you’ll see the AI ship carry out your orders automatically. An interesting idea, but one that will stand or fall on the quality of the computer intelligence. It’s not entirely clear how the command system will effect ship skills and abilities, or whether you can issue simple ‘move here’ commands and so on while your ships are being AI controlled, but developer Tindalos did reassure me that you can change to classic RTS controls in the middle of a battle if you need to.

The system isn’t entirely risk-free either; each of your subordinates comes with their own personality, from cowardly to suicidally aggressive. Send in a yellow-belly to assault an ork gun-line up close, and there’s a strong chance he’ll scarper. Now you’ve got a couple of options; you can order the cowardly blighter’s ship commissar (fanatically loyal types who love killing deserters and traitors more than they do the enemy) to put a bolt round into the captain, losing his experience and skills but sending a message that you are not to be trifled with. Alternatively, you can let him get away with it and earn yourself a ‘tolerance’ point. As every fan of 40K is aware, tolerance isn’t much of a boon in the 41st millenium, and the more of these points you rack up, the more likely your captains are to attempt similar acts of cowardice. Executing a captain immediately resets your tolerance level, so there’s a whole little sub-system going on here that’s very, very thematically consistent, and should pose some interesting questions for you. 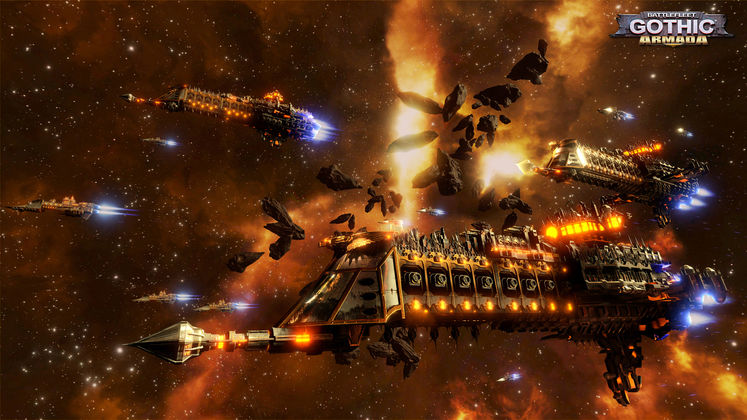 Deciding between sacrificing your assets or risking further ruin to protect them will be a big part of Armada’s campaign, which sees you play as an Imperial fleet attempting to defend the troubled Gothic sector of space. You can survey your holdings from a universe map, which tracks the advance of your alien and Chaos-warped foes. Here you can jump into battles, but also keep an eye on random events and mission trackers. One example we were shown was a planet that had been invaded by an ork fleet. The player had three turns to defeat the fighty green hooligans before the Imperial Inquisition turned up to issue an ‘Exterminatus’ order on the infested world, killing the orcs but losing you precious resources as the planet is virus-nuked out of existence. Tindalos want you to start off powerful and confident, and slowly tear apart your comfortable little existence, leaving you scrabbling to respond to multiple threats.

There’s also a main port hub where you can upgrade and buy new skills, ships, and staff. Completing certain side-missions for factions unlocks new heroes and gear; help out a chapter of Space Marines and the hulking great sods wills end a squad of warriors to defend your ship from boarding actions. The developers promise a huge range of cruisers, destroyers and other goodies to get your hands on. While you can’t mess around with weapon load-outs (each class of battleship has a very specific ordnance package), you can choose new personnel and upgrades, over 60 of them in fact, to improve your fleet. There’s no building or bringing in ships once you’ve entered a battle - you play with what you have - so it’s important to keep your fleet in rude health via visits to your home port. 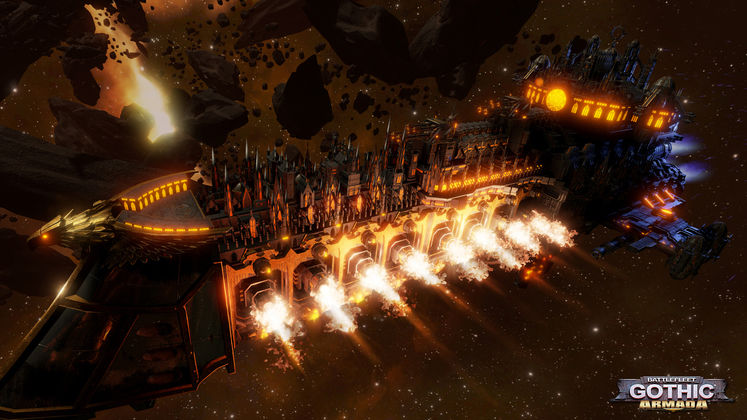 Multiplayer can either be played in traditional player versus player skirmish battles, or a kind of mini-campaign that Tindalos is still working on. At the moment the idea is to set players against each other in a series of engagements with persistent fleet destruction, but that might change in the run up to release.

Armada’s space battles, powered by the Unreal 4 engine, are in the very early stages of development right now, but the signs suggest they’ll be as gloriously explosive and chaotic as you’d hope from a Warhammer game. Missiles crash into hulls with a satisfying eruption, and ships etch warp engine trails across the void as they manoeuvre slowly into position. Damage models and full ship explosions were missing in the build I was shown, but the impressively detailed Imperial ship models and suitably apocalyptic backdrop – a jagged ruin of destroyed asteroids and floating debris – bode well. Armada looks the part, and its main campaign sounds fittingly bleak and chaotic. I didn’t get to see as much of the basic space combat as I’d have liked in my very brief preview session, but Tindalos seems to have a good handle on how to translate the measured, strategic boardgame into something a bit more action-packed without losing the essence and character of the game. Battlefleet Gothic: Armada is currently planned for release in 2016. If you’re a Warhammer fan, it’s one to keep a close eye on.

Most anticipated feature: Ork admirals commanding fleets of ork pirates. To be honest, I think that’s all I’ve ever wanted my whole life.