An RTS adaption of Warhammer 40Ks turn-based board game might sound ridiculous at first but Tindalos Interactive have captured the essence of what made its source material so great and made a real-time strategy game that’s challenging but compulsive. It struggles with explaining its depth to the player at times and too often you’re left to figure it out alone, but as a Warhammer 40K experience goes, you can’t get much better.

For those not blessed by the Emperor’s might, Battlefleet Gothic: Armada is based in the Warhammer 40K Universe and adapted from the board game of the same name. That means you take command in the single-player campaign of huge human warships to battle the other 40K races - Eldar, Ork and Chaos. As the 40K universe is built on over-the-top and excessive weaponry and comic-book characterisation I’m pleased to report that Armada has captured that perfectly. Loud, shouty acting puts you firmly into the Emperor’s embrace and the depiction of the Orks and Eldar are down to a tee.

After choosing your fleet each skirmish or campaign battle begins with deployment - it’s here that you can assign tactics and begin to manage the many aspects of each ship you have. In the beginning this is overwhelming and honestly, it continues to be overwhelming unless you’re going to dedicate your spare time to learning all this stuff. Fortunately Armada has thought of this and you can auto-assign most elements of these systems so you don’t need to stress so much. 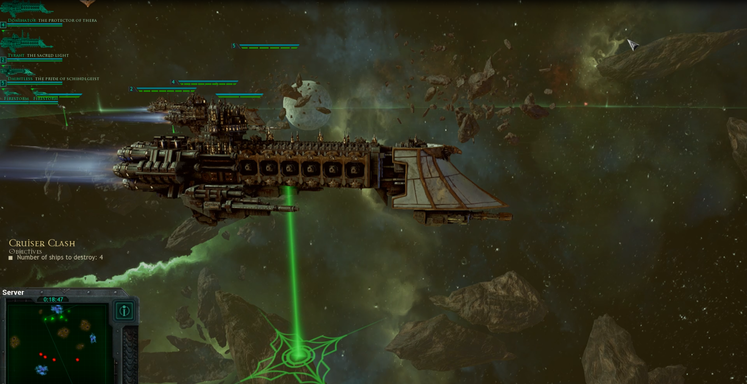 Ship detail and backdrops are amazing

Once all that is taken care of the real show starts and your fleet is in motion. Armada takes place in 2D which isn’t as restrictive as you might think given the inherent complexities built into the game. Each ship has multiple abilities and what seems impossible becomes possible thanks to a slow-down mode activated by the space bar. This TACTICAL COGITATOR, as my navigator likes to shout, enables you to manage your fleet’s abilities in order to manoeuvre or attack but without slowing the game down so much it becomes less of a RTS. It’s not enough of a slowdown to feel comfortable going through your abilities with ease, but half the point of an RTS is to feel just enough in control but still have the adrenaline-fuelled stress of a frantic battle.

Being able to control your thrusters in these slowdowns is key to mastering winning tactics. The fuel supply is limited to a meter and it’s easy to burn through it quickly but making a handbrake turn to avoid torpedoes is worth the risk before it refills. These moments when you expertly move around the battlefield, ram through several enemy ships or evade destruction are fist pumpingly good and convinced me that the developers have created one of the best Warhammer 40K RTS games.

Renown is the currency you earn in any match to upgrade your fleet. This is where Armada really starts to show it’s colours by allowing you to craft a relatively unique fleet. This becomes more valuable as you venture into multiplayer with the four different factions. Each battle can be so different to the last with each admiral having different tactics and upgrades making this part of the game truly unique and satisfying to play.

Balance with all RTS games is always an issue until the game has been out in the wild for a bit but I’ve had only a few minor problems playing online so far. Matches are 1v1 or 2v2 and though it’d be great to have three or four players, a single fleet can be so complex that just fighting on one front is enough to keep you occupied. 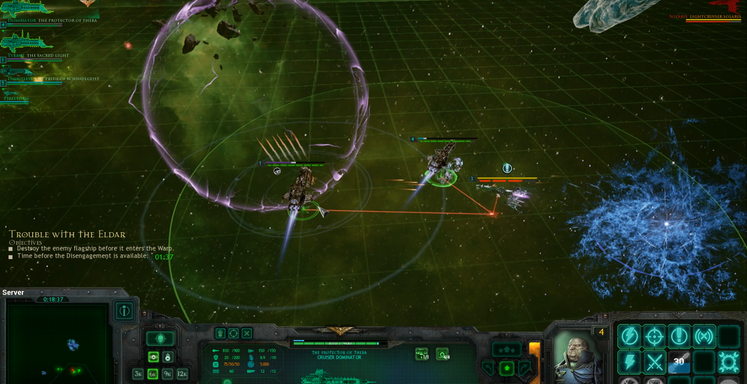 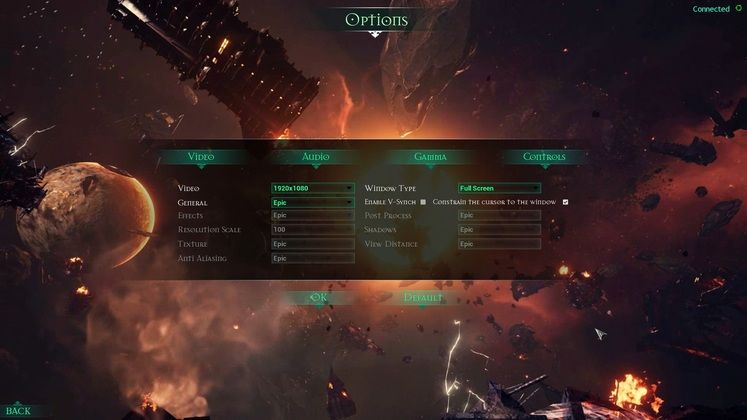 Graphic settings are basic but workable

Despite having a rig from a few years ago, Armada did run in Epic settings though the frame rate was choppy. Dialling it back to medium gave me a much smoother experience and with an RTS game you’ll want performance over looks every time. Having said that the art design of the fleets is superb with all the detail you’d expect from a genuine lead miniature on the screen. Colourful nebulae and deep space objects provide a beautiful backdrop to the slaughter. 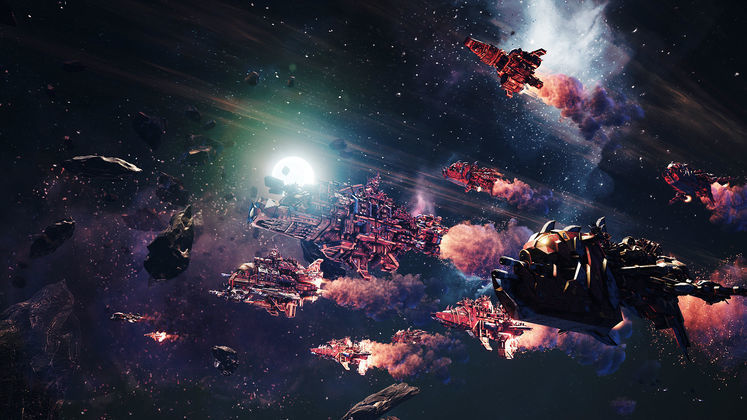 As you’d expect from Warhammer 40K the voice acting is LOUD and VERY DRAMATIC. Pretty much perfect for the setting though being shouted at throughout the tutorial led to a headache I won’t forget in a hurry.

The single player campaign is long and winding, with a narrative that branches and introduces the various factions in a cool way. What it lacks is a decent tutorial that explains all the systems you can expect to use throughout your career. Maybe it’s just the way you’re bawled at by your superiors and inferiors but I felt explanations went by too fast and the detail too great to grasp at first light. It’s nothing deal breaking but this is one RTS I’d prefer to play with a vintage Amiga game manual beside me. But then I’m old and grey too. 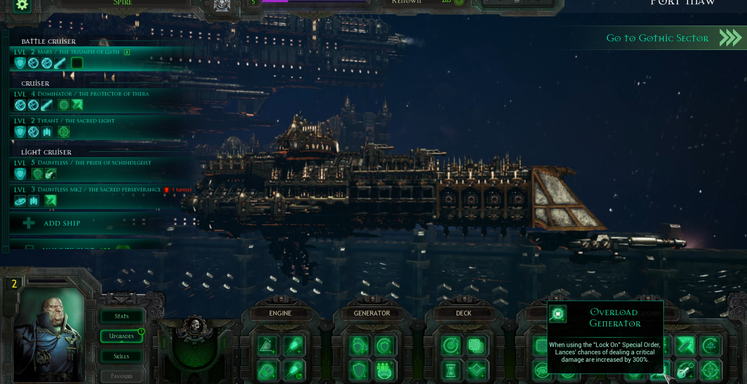 There's a ton of upgrades and abilities to tinker with

The difficulty doesn’t help with this aspect of Armada either, as it’ll gleefully punish you for any errors you make and usually leads to defeat on most maps I played. You can take this difficulty and make excuses or man-up and keep learning how best to manage your ships and captains. Only occasionally did I feel like Armada was screwing with me and being unfair and that’s down to the mission types you sometimes have to play. Escort missions suck of course. I remember hating them in the X-Wing games and that hatred has risen again once more here. Protecting lumbering great mile-long ships was hard enough in an agile real-time fighter but doing the same here in an equally lumbering ship frustrates. As does the odd mission where you have a limited amount of time to reach an objective - leading to a bum-rush with no margin for error.

Those gripes I’ve outlined are minor as Battlefleet Gothic: Armada conveys the suitably epic universe of Warhammer 40K in an RTS that offers decent depth and a great atmosphere. The campaign is great and if you allow the game to punish you for defeat it’ll bring more impact and consequence to the later battles. Sure, the story is ridiculous but it’s what you’d expect of a 40K and it fits the genre perfectly. With a multiplayer that has as much nuance and depth as each ship you can manage, Armada is well worth your time if you’re a fan of the 40K universe. For the Emperor!