Will they be telling stories of your deeds for generations to come?

21 November 2011 | By Joe Robinson
Crusader Kings II, from Paradox Interactive, is a game about Legacy. Now, this is probably not something the average man really thinks about. Sure, plenty of us would probably like to leave a mark on the world, some proof that we were here and that we did things, even great things, but to most of us it's probably a foreign concept. In this game however, not only are you forging a legacy for yourself, but also for your sons, your grand sons, and for every generation that is to come.

If you've played Sengoku - the most recent title from Paradox's internal team - then you'll already have a good idea as to what to expect (if you never played the first Crusader Kings, that is). Instead of taking control of a country as some meta-physical entity that represents the ruler and the governing body, you take control of a character, an individual person. Now, this person may be the King of England, in which case you will also be controlling a country to some degree as well, but he may also just be the Count of Sussex, or the Duke of Northumberland, and so your responsibilities are diminished.

The game is played out in real time, like most Paradox games, which means to a certain degree you'll be sitting around waiting for things to happen. This isn't a criticism as such, but it means you'll need patience. This is a very far-reaching game, with goals and concerns that extend beyond the immediate situation. People often ask how you 'win' a game like Crusader Kings II and I'd personally argue that you don't, not really. The official mechanism for winning is based around an overall 'score' - so when the game comes to a natural end, the person with the highest score wins, but it's not about that - it's about the journey. You must lead your family to greatness, and then keep it there through every successive generation - and you will fail at that. A bad egg, outside circumstances... something will topple your family, and it'll be your job to claw your way back to the top.

In gameplay terms, this can mean several different things. War is present and an option in this game - in fact it's a lot easier to do now than the original game, in terms of finding justification for war and in terms of financing a war (in the original CK, warring was almost prohibitively expensive for everyone other than the naturally rich). There's also diplomacy, although there's no formal 'alliances' or anything, except through marriage, and that only applies to the immediate family. The King of England might rush to his Son-in-Law's defence, but will be less bothered about his grandson or great-grandson if he's not part of the same dynasty (a child is usually of the father's dynasty, apart from very specific circumstances, and in this game that makes all the difference in terms of who supports who).

The main thing for this game though is going to be content, specifically events, decisions and plots. As we mentioned, War is easier to wage this time around, but it's not been made any more practical or wise. Wage war too much and you'll piss everyone off and get bitch-slapped, and depending on where you are in the world, and your position, there may just not be anyone to beat-down on. Therefore, the player would look to events and plots to bide their time (or as an alternative way to achieve a goal). There'll also be events, character events that affect you or a family member that need resolving, realm events, where you need to deal with a crises, or an event, or a vassal. If you're lower down in the hierarchy, you may get events from your liege as well, although at the moment those are rare. Again if you've played Sengoku recently you'll be familiar with the plot system, as it works on nearly the same principles (differing cultural influences aside).

Now, at the time of writing, Crusader Kings II seems to be a little bit light on the plots front - there's some stock plots that everyone can do, but despite the hours we've put into the preview build we haven't seen a lot of variety - that the player can do anyway. For example, AI character's can start a secession crises against you, or go to war against you to institute some law or other, but for the moment we haven't been able to institute the same back against an AI player. This may because it's still some months away and the devs are still adding in content, or it could be that we're just not meeting the right conditions (but that would mean better feedback is needed). Still, over the past few weeks the game has been patched a lot, and we have seen more and more content been added, so we'll have to wait and see.


Crusader Kings II is still a couple of months away from release, but already it's looking fantastic. Bugs and glitches are currently present, and going with Paradox's history they might still be present at launch, but in its current state it's already more polished than Hearts of Iron III was, so who knows. AI behaviour has been a bit odd at times, but nothing completely whacky has turned up as of yet. Still, the tweaks and improvements that have been made since the first game already make this the better experience - be excited. Crusader Kings II is due out on PC on the 7th of February.

Most Anticipated Feature: We hope to see some more interesting and complex plots, as that would really make that particular element the best part of the game. 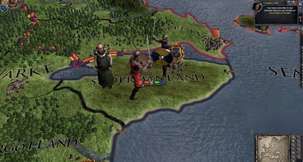