“Never get involved with politics” my dear mother told me, “it’ll make everyone hate you”. Wise words, but Mum never counted on me turning into a faded rock star pig. You may find political games boring (outside of Civilization or Total War of course), especially ones based entirely around winning elections, but Philippines-based developer Squeaky Wheel aims to change all that. Their first idea is a simple but nefarious one: make all the characters cute animals. Damn, they’ve got me already.

A small taste of the political animal machine.

The goal of Political Animals is simple: get elected President of your island. There are many ways to accomplish this, both honourable and shady, and you’ll simply have to live with yourself afterwards. Yes you may become President… but at what cost?! Calm down, it’s a videogame, don’t get so dramatic. Nevertheless that villainous crocodile Croccy is getting his comeuppance, so help me. Even if I have to assassinate him myself.

The start of Political Animals is also simple, deceptively so: customize your candidate. The animal you choose will define you, although the actual species does nothing barring what you want to look like. The mouse, the crocodile, the bear… nah, I’ll go with the faded rock star pig with an earring and a leather jacket. After that though the real choices begin, the ones that actually affect your game and how it’ll play. 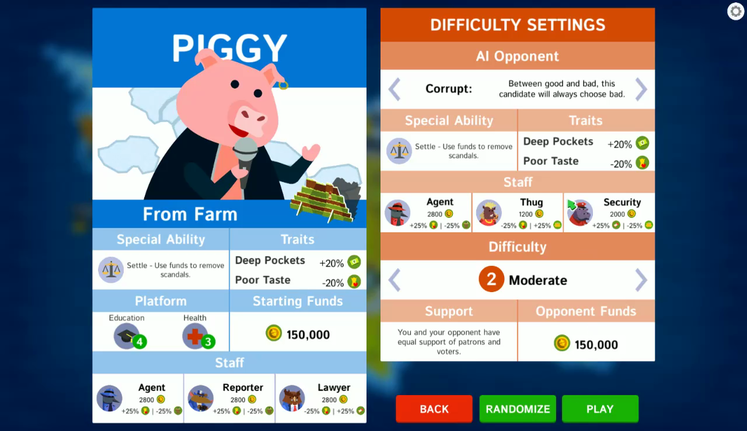 That cute bio of your animal? It’s actually written based on what Traits your animal has. You have to choose one positive and one negative. Positives can include boosting Logistics points, decreasing the effect of Scandals, improved campaigning ability and finding it easier to get money. Negatives include, well, the opposite of these. Harder to find money, trouble improving relations with Patrons, less Logistic points, stuff like that. You’ll get to choose a Special Ability too, like being able to freely move between sectors, spread lies about your opponent, threaten their staff or stop them from entering a sector. You need to choose wisely and get a good balance between positives and negatives. You’ll probably have to jump in and play it before you really get the hang of knowing what bonuses you need.

You then get to choose an island to campaign on, including ones based on the US (Autumn Island), Japan (Summer Island), and the UK (appropriately, Winter Island). These have different bonuses and population concerns but otherwise they all play quite similar, and you can choose which sector of the map is your campaign headquarters. Choosing a decent Staff though is more important. You get to select three staff members, all of whom have different attributes and special abilities. For example, the Lawyer easily settles Scandals, the Thug can threaten and disable enemy staff members, the Reporter calls out a Scandal for an immediate knock on your opponent’s reputation, and the Preacher inspires districts and gets you more Logistics points. 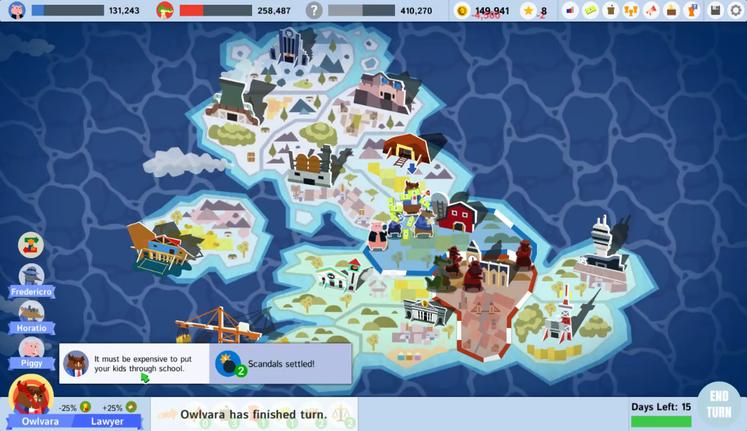 I guess I better explain the various parts of the game then. These Logistics points I keep mentioning are basically Action Points. Each action you can take, over your candidate and his three staff members (who you also control, so you have four characters basically), costs different amounts of Logistics points. Once you run out you might as well end your turn. Most actions cost money too, which you can either get back through the ‘Raise Funds’ action or through Events. These Events pop up every couple of turns and give you several choices on what to do, and all will have positive and negative consequences. For example I got into a Traffic Jam in my way to a rally and a policeman offered to help me skip the queue – I agreed, but while I gained support I got an extra two Scandal points because a lot of people got shoved out of the way while the cops were helping me.

Scandals are a powder keg, really. You can manufacture them with an Agent or either give or receive them as the consequence of an Event (bulldozing a forest for a mall might get you a lot of cash and Patron support, but it won’t go down well). They don’t do anything at first and can build up in a sector, but when a Reporter goes through reporting them it can decimate your support – or if you’re clever, your opponent’s. 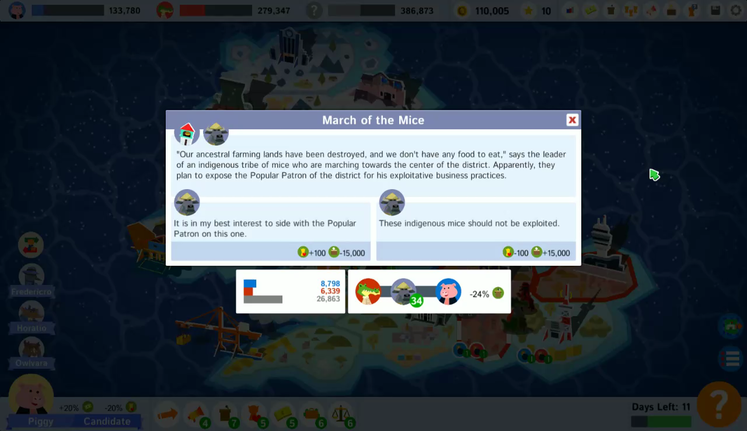 Winning is a case of making the right decisions, really. Patrons are important to butter up and ply with gifts as they can give you major bonuses to cash, costs, ballots, etc but at the end of the day it all comes down to the common people’s vote. Unfortunately they’re so easily swayed by money, threats, headlines, and a winning smile that the results can always swing either back in your favour or away for good. In that Political Animals nails exactly what this election business is all about, with the major difference from the real world being that it’s actually fun to play.

Not too long until release now, as Squeaky Wheel are aiming for a November 2016 date to ride the wave of election interest with all that nonsense going on in America these days. I’d rather vote for a mouse than a hairpiece anyway.

I’d be remiss if I didn’t point out how lovely Political Animals looks. The whole thing looks like a particularly beloved classic children’s cartoon book, with a cute Paper Mario-style “cut-out 2D characters on a 3D world” aesthetic. All of this belies the serious issue of politics, and Squeaky Wheel parodies it without mercy. The cuteness of the game almost makes you forget that one of your staff members is a hired goon tasked with threatening your opponent’s team or that yes, a mall would make a much better use of that land than a school. Sinister and yet lovable, that’s Political Animals. 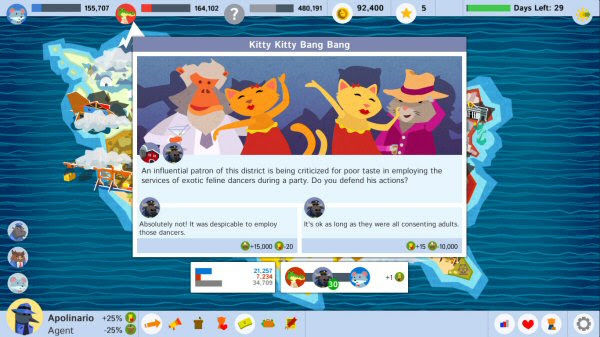 It’s also an intensively strategic game. It’s almost chess-like in fact, with you taking turns, moving your pieces around a board with each able to accomplish different things, then, er, expose an owl for his exploitative business practices (I think the Bishop can do that). There’s a real push-and-shove between opponents, with every choice to get a little money countered by a scandal knocking down your popularity. It’s quite brutal really, but hey, that’s politics. We’ll be watching Political Animals closely, and we’ll review it for sure unless Trump gets elected and we all end up in a post-apocalyptic wasteland come November. I might even show it to my Mum.

Most Anticipated Feature: Winning the damn thing. As an elephant. 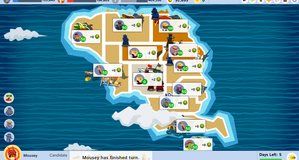 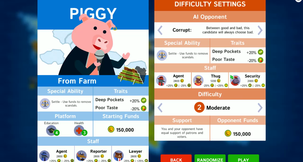