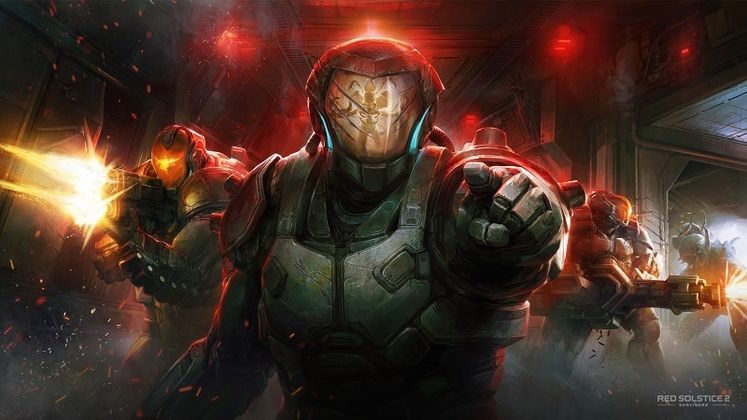 The main source of inspiration for Red Solstice was Warcaft 3’s Night of the Dead custom map, Project Lead Hrvoje Horvatek tells us. The lack of games tapping into a similar atmosphere and zombie survival playstyle saw developer Ironward make its own in 2015. In a few months, Red Solstice 2: Survivors takes the series forward, pitting one lone soldier or an entire squad of up to 8 people against the mutants that threaten Mars.

Like with any sequel, the developer wanted to improve upon the original’s recipe by adding more environmental interactions, not resorting to repetitive wave-based survival missions, and introducing a strategic layer that makes players think of long-term consequences. We got a taste of its blend of strategy, tactics, real-time combat, and RPG during a recent multiplayer-focused playtest and, while it isn’t coming together flawlessly just yet, there’s definitely something there for co-op enthusiasts.

Although it’s more than 50% terraformed, Mars isn’t doing too well in Red Solstice 2: Survivors. As soon as we dropped into the two playable urban maps, their buildings dwarfed our armored soldiers, waiting to be explored in eerie, still silence. Soviet brutalism, 20th-century futurism, and 80’s sci-fi cinema informed the art style, the developer tells us, successfully creating an ominous, oppressive atmosphere. Even before you see the burning cars and fleshy growths taking over, you sense that something’s not quite right. Not long after, the local mutant population shows up, quickly proving how little it thinks of hospitality. The STROL virus takes over the minds of the creatures it infects, reducing them to misshapen monsters only driven to tear through armor, flesh, and bone. 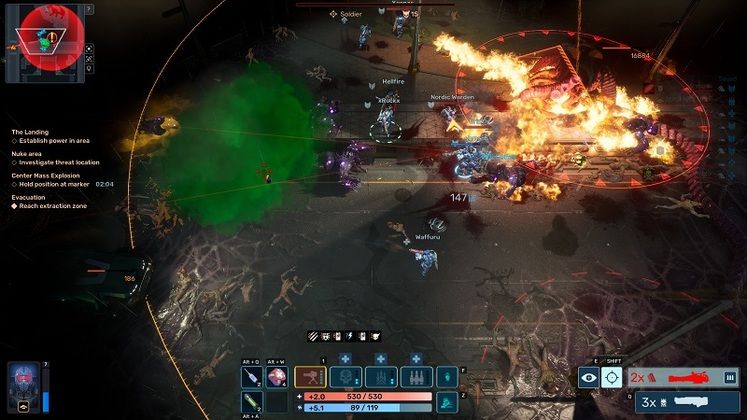 Both Skirmish maps available during the playtest were quite sizeable, featuring a lot of ground to cover between their courtyards, multi-lane roads, and multi-floor interiors. Their layout remained static between playthroughs but the locations of objectives did switch around, often requiring that we traverse them entirely. At launch, Horvatek tells us, they will be randomized from “over 10 different map layouts and environments.”

Red Solstice 2’s missions come in two types: main and secondary. Completing the former is necessary to trigger the evacuation sequence that enables your squad to extract. This ends the level and rewards experience used to unlock new weapons, skills, and upgrades for your characters. The latter appear dynamically as you progress through levels. Although optional, they can both reward loot that increases your chances of survival while granting additional experience. One secondary mission literally lets you loot a supply drop if you can protect an area for a couple of minutes. Others task you with restoring power to certain locations or nuking sections deemed lost to the infestation.

In practice, all these missions boil down to some semblance of running across the map and either interacting with a terminal, taking out enemies, or holding them back for a set amount of time while you defend various spots. They’re not necessarily exciting by themselves, but the combination of foes you face, the wounds or suit damage you have to deal with as fights drag on, and the layouts of the locations in which you battle help create stories that stick with you after the levels end. Perhaps a well-placed shot allowed your squad to extract just as the evacuation timer reached 0. Maybe a teammate heroically chucked explosive barrels at enemies trying to climb narrow stairs while you were desperately rummaging through containers for ammo. Or perhaps you got too caught up in killing mutants until all of the exit points were overrun by the spreading biomass. 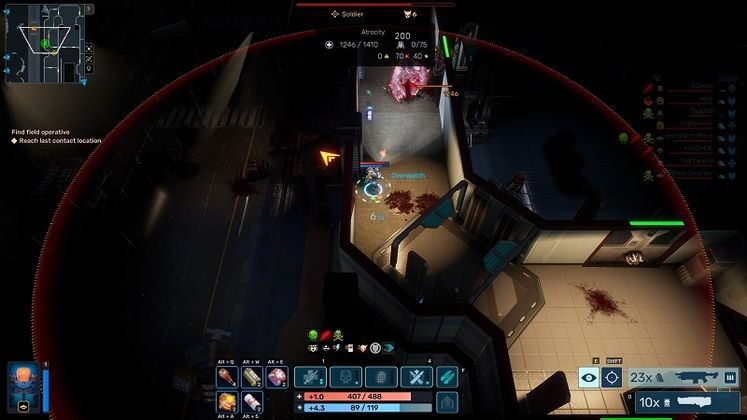 No Shortage of Killing Tools

We fought back against the STROL as three of the four classes featured in Red Solstice 2’s playtest. The Assault is the traditional rifleman whose passive and active abilities improve the amount of damage they dish out. The Medic brings a large amount of utility, healing, and reviving downed teammates whether from up close or using remote drones. Having a few of them on your team isn’t mandatory, but they saved our skin many times. The Heavy revels in firepower, favoring the mighty minigun and autocannon. The roar of the former – which lacks the friendly fire potential of the latter – as it tears the flesh off enemies was a highlight of our time with the game.

The Heavy also can also equip a shoulder-mounted turret that reserves energy – required to activate other skills – but comes in handy in those situations when you run out of ammo. Another awesome ability allows it to drain energy used to power all skills, converting it to ammo for your primary weapon. The remaining launch classes are the Recon, Marksman, and Demolition, favoring stealth, long-range combat, and explosives, respectively. The developer also plans to add two more – the Terminator and Hellfire – in free post-launch updates, which should make for a roster with enough variety.

There’s a certain degree of overlap between the weapons that each class can equip, broadly determined by weight requirements; with the proper upgrades, you could see Medics wielding miniguns. Classes take both a primary and a secondary weapon into battle. The latter comes with less ammo, but suppressing opponents as they try to close in on you, shredding the armor of tough brutes, or covering entire areas in fire is both satisfying and can turn the tide when a fight edges dangerously close to not going your way. 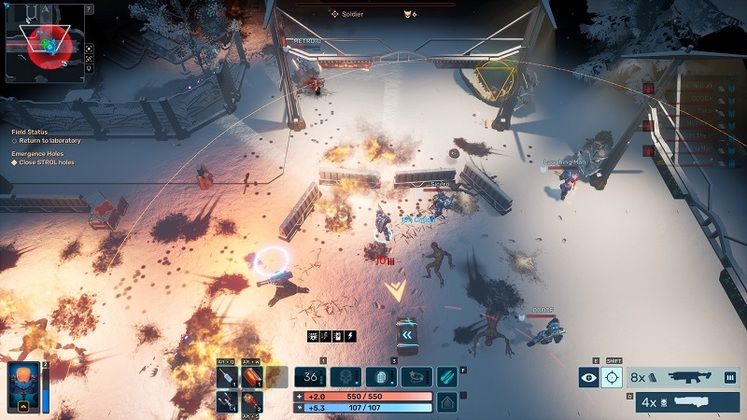 Although we only got to try out a small portion of the available arsenal, the game takes customization quite seriously. Classes also have unique skills that set them apart and multiple passive upgrades to complement them. Some of these options obviously change your playstyle more than others – a semi-auto, armor-shredding rifle is effective at different ranges and against different enemies compared to a submachine gun. But you shouldn’t overlook the smaller upgrades, as they define how tanky your character is, how much additional damage they deal, or how far Overwatch extends. If you’re playing with a squad of friends, it looks like there’s potential to coordinate builds to complement each other. You just need to put in the time and get enough skill points to unlock what you need.

But no matter how well you plan ahead, you won’t get far without scavenging for resources. You enter missions well equipped, but mutants come in high numbers. The waves increase in variety and challenge while your bullets are limited. Looting lockers – which come in several rarities – can uncover additional ammo, but also medkits, bandages to stop your wounds from bleeding, and stimulants that temporarily enhance your combat capabilities. You can also find mines and remote explosives that help when defending positions and weapons systems that improve your firearms. Exploration often yields tools that can make a difference between succeeding and failing, but you have to be mindful of just how far you go to chase them and how much time you spend separated from your squad. The mutants are pretty adept at overwhelming you when you least expect it. 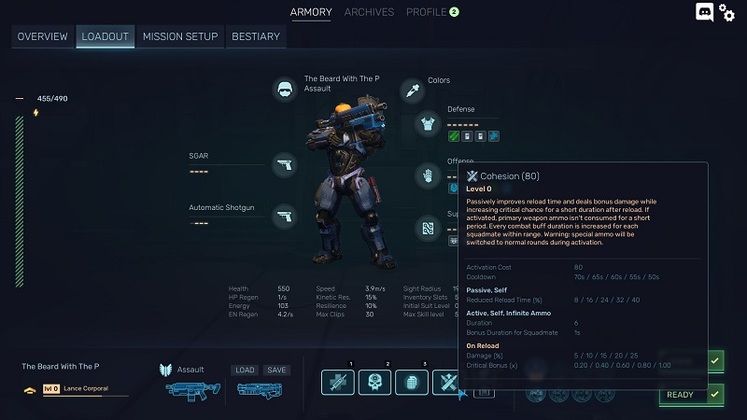 They’re also quite hideous, ranging from centipedes and smaller enemies that largely act as cannon fodder to misshapen meat hulks, flying bugs that lob ranged projectiles, and swift hounds. On paper, this makes for a decent amount of variety. In practice, it was more of a mixed bag. Some of Red Solstice 2’s enemies felt a bit too sluggish, while others, like the massive Behemoth, were just frustrating bullet sponges.

They’re very much capable of numerically overwhelming a squad that doesn’t fight together or surprising a lone player who thought they could safely complete a secondary objective while their team pushed on forward. But as much as they highlight the importance of sound strategic and tactical decisions, they simply fail to stand out as individual entities or as a memorable collective foe. They’re not all that interesting mechanically, either. Their attacks lack oomph and janky animations only reinforce the fact that you’re going up against a programmed mass of pixels, rather than ravenous, bloodthirsty beasts endangering humanity’s very existence. 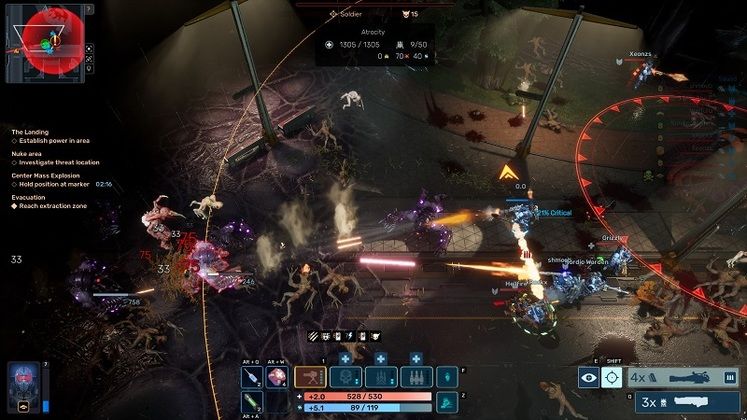 Red Solstice 2’s control scheme does require a bit of getting used to and, even after a few hours of culling mutants, it can still feel a bit unwieldy. The mouse is your main link to your character. By default, the right mouse button is tied to movement and interacting with objects, while the left mouse button comes in handy when you’re looking to fire or use items. The keyboard lets you freely move the camera around and use consumables or skills via hotkeys. In theory, none of this sounds outlandish, and the keys are rebindable.

When enemies attack in manageable numbers, staying on top of things only takes a bit of practice and enough coordination. When enemy waves become a bit too intense, it’s terribly easy to stumble or run into cars, walls, and street lights as you try to move, aim, shoot, and hit the right opponents with a skill or consumable item all at once. Sometimes, keeping track of your soldier’s location when you’re surrounded by many allies also proves challenging. On higher difficulties, these frustrating moments can set off a domino effect that condemns entire missions early on, leading to your squad inevitably dying. 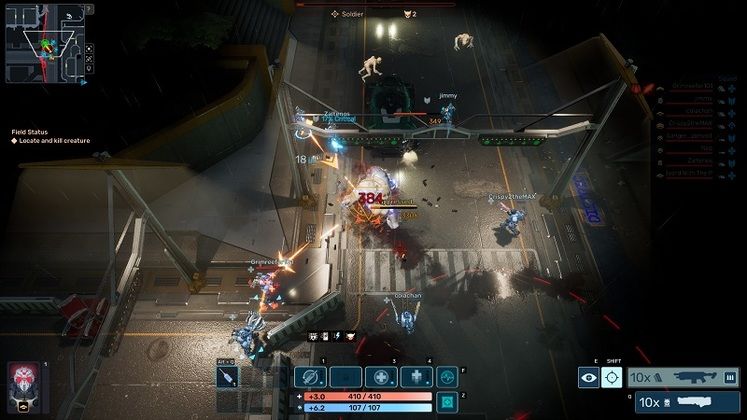 The inclusion of Overwatch as an ability available to all classes can seem odd, considering how the action unfolds in real-time, but fits nicely with the other skills and is often a godsend. This especially applies to navigating tighter spaces, where you have less time to react to an opponent that attacks from outside your line of sight.

Keeping Overwatch active eats up a chunk of your energy but lets you worry just about movement while your character automatically shoots any enemy that enters a circular area around them. This area is, however, smaller than your range when manually firing and the AI doesn’t always prioritize opponents very well. When a swarm of mutants gets dangerously close to your squad, it’s better to manually aim – which also nets you a critical bonus – and pick off the high-priority targets yourself. Learning when to switch between these fire modes can make the difference between survival and death. 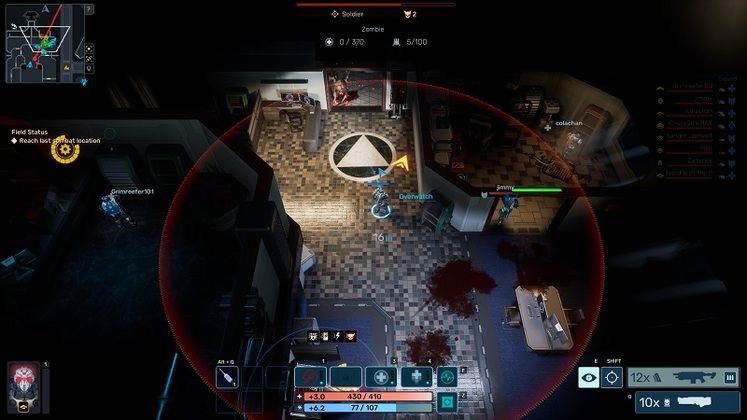 The version of Red Solstice 2: Survivors that we played definitely felt scrappy and in need of additional polish. But its classes, abilities, and most weapons we tried out felt great to use. It was also challenging and rewarded planning, working together with your team, and watching each other’s backs. It definitely has the spark that could help it find an audience as a sci-fi co-op shooter, especially if you take the time to learn all its minutiae, but some of its less refined aspects currently shroud it. We’ll see how well it all comes together when it fully launches on June 17.

The playtest was entirely focused on the game’s Skirmish mode and, while we didn’t get to try out the campaign, here’s developer Ironward sharing some insight on it, how progression will be handled between the two modes, and whether or not we’ll be able to join games that are in-progress at launch. 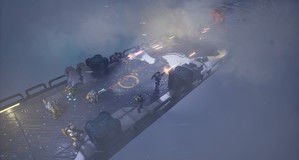