I’m pretty damn certain that Star Wars Battlefront will have major technical issues for the first few days, possibly rendering it unplayable on PC. I also won’t be surprised if it feels lacking content-wise compared to 2005’s Battlefront II, which offered Classic and Prequel Trilogy Battles, Space Battles, Hero Battles, and a large enough range of single-player options to make the game enjoyable even if you never touched the online. Nevertheless though, it’s still my most wanted game this year because it looks like fun, authentic, next gen-y Star Wars. I got some hands-on time with the game at this year’s EGX show and I’m here to report if DICE and EA have the gameplay to match.

Chris Capel goes hands-on with the single-player/co-op side of this slightly anticipated shooter.

However, there is a side of Star Wars Battlefront that I know a lot of people are interested in but haven’t heard much on, and that’s the single-player/co-op side. Everyone’s seen the Hoth battles now, and yes they look epic, but what about when you’ve been humiliated by 10-year-olds shouting “gay” at you for the fourth time in a row and would just like to take on the whole Empire yourself, or with a friend? At the moment DICE and EA have only shown off Missions, but are promising more offline content in the main game. So I’d have to be content playing one of these Missions for now.

Just like how the Hoth level is the only PVP stage EA have been allowing people to play, the Tatooine mission is the main one that EA have shown off and indeed it’s the one I played. Basically set in the canyons of the Skywalker homeworld you play as one or two Rebel soldiers evading the Empire. While there is no real canon explanation given for what’s occurring I would speculate (puts Star Wars glasses with a picture of a Stormtrooper on the side on) that these Rebels have escaped from the Tantive IV Blockade Runner at the beginning of A New Hope in a different escape pod. Of course the presence of everyone’s favourite Mon Calamarian Admiral Ackbar and the fact that success on the mission allows the Star Destroyer to be blown up seems to contradict my idea, but go with it for now. 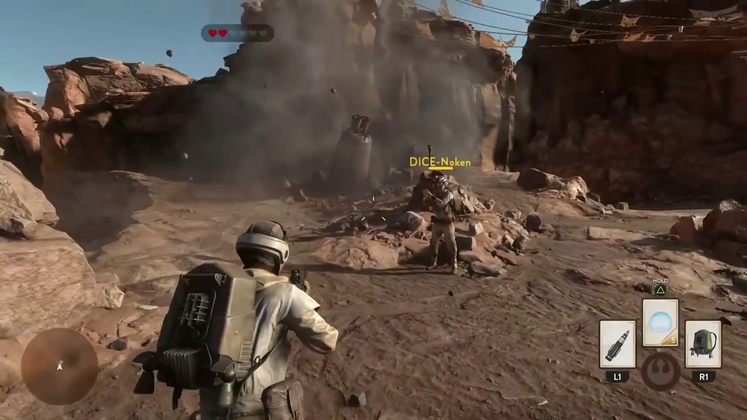 Defend the pod to get goodies!

The Mission was Wave-based. After a thankfully very brief cutscene we were given a short opportunity to explore the level alongside a holographic chat with Admiral It’s-A-Trap himself. I actually quite like how his lips aren’t synced perfectly with his words to make Ackbar more puppet-like, which is appropriate. After that we treated to six progressively more difficult waves of Imperial forces to fight off in the rather maze-like canyons, alongside occasional bonuses to find. That’s basically it: survive, and kill everything shooting at you. Sorry for shooting you, teammate, I didn’t know you were going to walk into that Orbital Barrage I activated.

I’m glad there was a few seconds before the first Wave, as it also allowed me to familiarize myself with the controls. Given I was using a PS4 pad I was still struggling a little by the end and obviously had little to no accuracy, but for the most part the controls were simple. Shoot, zoom, sprint, jump, interact, crouch, accidentally blow up teammate, all worked as you’d expect from a modern shooter. There were a couple of things that make Battlefront stand out a little though. The most obvious one is a button to change between first and third-person, which I’m sure people will be pleased to hear. I’m personally on the side of first but I know plenty of people who swear by third, so it’s good to see the option.

The other interesting addition is the use of “Ability Cards”, assigned to three separate buttons each. These can be chosen at the beginning, but the three I had assigned were Homing Rocket Launcher (that only worked on vehicles), Personal Shield, and Jetpack. The Jetpack is a one-off boost that simply gives you a bigger jump, and oddly you have to jump and then press the separate assigned Ability button (on the PS4 it was R1) which is a little clunky but simple to get used to. It doesn’t send you up very high though, and I smashed into rock faces an inch from a ledge plenty of times while playing. All of these abilities had cooldown timers so I couldn’t bounce with the jetpack all over the map. 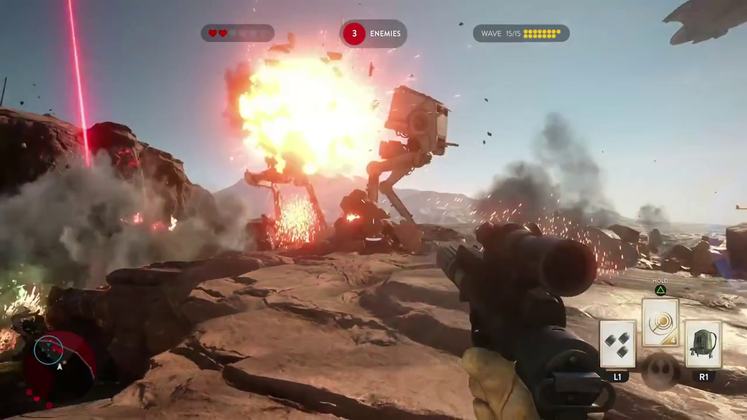 A fourth ability is obtainable from Supply Pods that start landing around Wave 3, just as the offence is beginning to pick up. These Pods land at a random location and have to be found, activated, and then defended for about 20 seconds. Oh the cockiness of the Stormtrooper that proclaimed “Pod secured” just as I rounded the corner. He’s a little dead now. After that three floating Rebel Alliance symbols appear round the pod, a slightly immersion-breaking game-y way to do it but whatever, and each one gives a random one-off Ability. You can only hold one at time, so one player can’t steal them all and piss his teammate off. These special Abilities include Orbital Barrage (choose the location and watch as that area is bombarded), Team Shield (a more powerful deflector shield), Thermal Detonators, and a proper Rocket Launcher. It’s interesting then to note that there are no grenades, RPGs or other explosives in Battlefront except as Ability Cards. The bigger maps will also include being able to command vehicles or Hero characters as one-off Abilities, but not in smaller maps like Tatooine.

The map itself is all rock outcroppings and narrow areas, with just enough space and flatness to fit AT-STs in there but not have a gigantic battle or anything. It’s an arena for sure, and without the Jetpack to get up to higher areas it’s a maze to get around. At one point a Supply Pod landed above me, but I messed up my Jetpack leap and it took me ages to find a normal walkway up to the pod - by which point the next wave of Imperials were on me. There ¬¬is a certain amount of terrain destruction, for example any cover that’s not a mountain can probably be chipped away by blasterfire, but nothing like Battlefield’s “Levelution” beyond a Star Destroyer catching fire in the background.

Graphically, audibly, and stylistically though… this is Star Wars. The graphics are just right, with some wonderful explosions, perfect Stormtroopers, a Star Destroyer hanging in the background, this is the next-gen Star Wars experience I’ve wanted since LucasArts collapsed into a pool of its own managerial incompetence. Sound-wise things are just as amazing, with John Williams music blasting away just to annoy video streamers, the exact right type of blaster sound effect on regular guns compared to AT-STs, and perfect voice actors on Ackbar and the ‘Troopers. Lovely.

Finally though… how does it play? Did I have fun? Well, yes, but I’m honestly not sure how long I would replay it for. Guns were a little too accurate at long range, with the rather large gun-sights representing a “anything in this range will die” marker, which we guess allows more people to have fun playing it but rather limits the skill factor. It’ll be interesting to see what mouse and keyboard brings to the mix. Probably make things too easy. The enemies levelled up nicely between Waves, with basic Stormtroopers making way to ones with shields, jetpacks, sharpshooters, and finally to AT-STs. I personally enjoyed facing AI opponents because they actually behaved like Stormtroopers rather than human players strafing and jumping all over the place unnaturally, which makes me sad Battlefront doesn’t have a proper single-player campaign despite DICE’s spotty record in this department.

Nevertheless it was all a good slice of fun, and I can see myself playing offline a fair bit. I’m hoping the other Missions aren’t quite so predictable though, with the basic Wave-based setup hardly offering much excitement. Furthermore I’m hoping for maps that allow more co-op companions, as at the moment EA are only saying two-players maximum in these missions. At the very least my fight on Tatooine has whetted my appetite for the main game, online and offline, and I’ll be sucking Star Wars Battlefront dry when it comes out on 19th November. I just hope there’ll be enough on offer to sustain me.

Most Anticipated Feature: Single-player? Hopefully more imaginative mission goals and wider activities. In general though, getting to play as Darth Vader. Or dogfight in an X-Wing or TIE Fighter once more. Or fight in the new Battle of Jakku. Or…