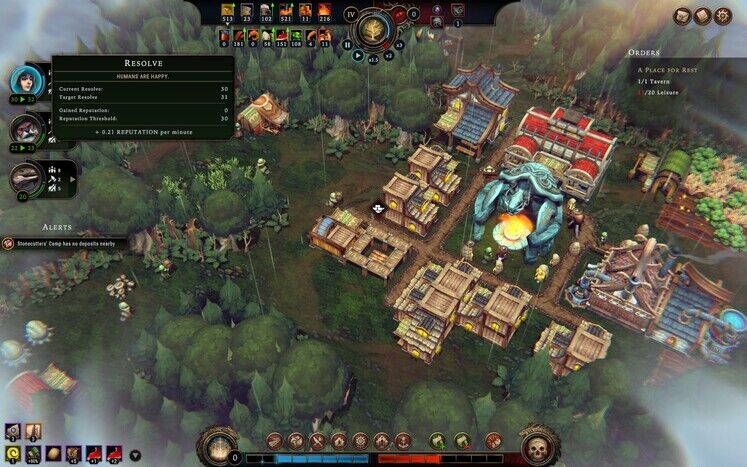 The classic SimCity experience was of painstakingly assembling your residential, commercial and industrial zones in socio-economic synchronicity before unleashing whatever disaster you desired to wreak havoc. Half the fun was watching your perfect city crash and burn. Like jumping on a sand castle when it’s time to leave the beach. Against The Storm employs this same idea of building ‘em up only to smash ‘em down in service of a city-builder designed around Roguelite semi-persistence, deck-building luck-of-the-draw, and runs that rarely last more than an hour.

The land you’re settling is rich in resources, but at the mercy of the deadly Blightstorm. At the end of each cycle–roughly every four or five runs–all your settlements are wiped from the board and the map is reset, ready for you to venture out once more. Certain key resources can be salvaged and spent between runs on upgrades that confer permanent bonuses for every subsequent run and cycle. Completed objectives will unlock new cards for your deck, providing you with access to more advanced buildings and more efficient production chains.

The Roguelite structure and deck-building mechanics are familiar, but their presence in a city-builder is unusual. However, Against The Storm is teeming with smart design decisions that ensure the core city-building, deck-building, and Roguelite structure work in tandem, each reinforcing the others. Indeed, the introduction and implementation of these features make only for a better city-builder–perhaps the best in the genre in quite some time. 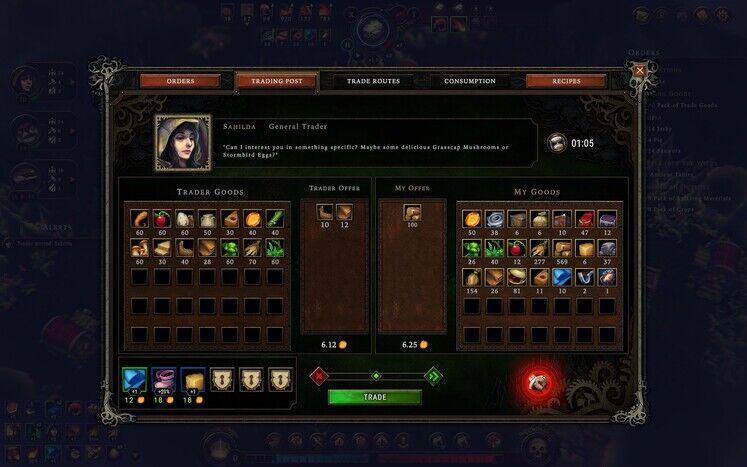 You always start in a clearing with two core structures–the hearth, where your people gather and take comfort in the fire, and a storage warehouse–are pre-built. In the surrounding forest are a random mix of glades that you’ll reveal as you send your woodcutters out to chop fuel for the hearth. Small glades contain resource deposits while large glades house special events that may be dangerous, as well as richer resource deposits.

Chopping trees and discovering glades raises the forest’s hostility towards you, increasing the chance and severity of curses afflicting your settlement, from the mild (your workers walk more slowly) to the downright nasty (each settler has a small chance of dying every 30 seconds). Villagers have needs you must cater for, too, with goods and services that must be found in glades beyond. Exploring the forest becomes a delicate task of balancing the urge to expand to ensure your villagers are happy against the temptation to overreach and unleash the forest’s fury. You’re not only battling the environment, but the empire’s impatience, too. Completing orders from the crown will boost your reputation, buying you more time to improve your settlement in an effort to return home a hero rather than in disgrace. These intertwined systems dovetail so beautifully, always providing urgent short-term objectives alongside more strategic long-term goals. There’s a constant feeling of spinning plates, only they’re all whirling at different speeds, and if one slows down or speeds up out of sync then the whole thing might come crashing down.

Every map is a lucky dip. You never know what combination of resources you’re going to find in your starting area or any subsequent glade. Adding to the uncertainty, when you start a map you have immediate access to only a handful of buildings; at intervals you’ll be able to choose new buildings from your deck, but there’s no guarantee you’ll be able to pick the buildings you really want. Instead, it’s all about improvisation. Each map becomes a unique challenge. You open a few glades and realise you’ve got good access to grain and berries, but no meat. There’s plenty of wood, and a majority of your villagers are beavers (who gain production bonuses when employed as woodcutters), but there’s no stone to be seen. Yet you’ve still got to find a way to deliver on the empire’s demands and placate the population, even if that means producing a bunch of goods you don’t need in order to trade it for the things you really want. 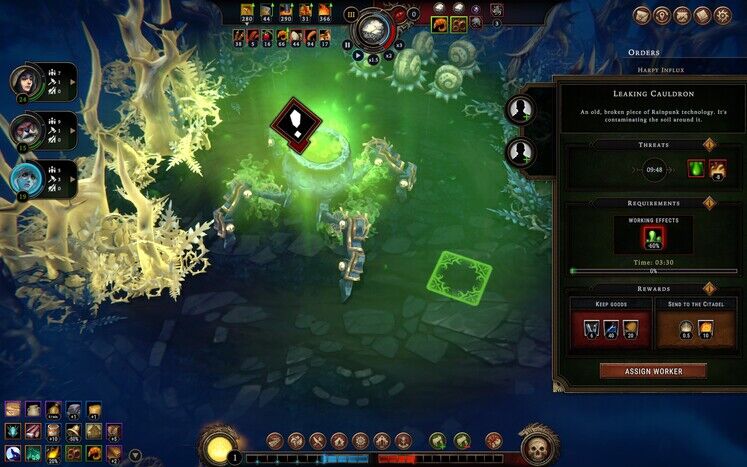 Such trade-offs abound, and aid the improvisational nature of managing the settlement. All buildings serve multiple purposes, only some are better at certain things than others. The Smokehouse is the most efficient way to make jerky, but if your lizard villagers are demanding preserved meat and the only jerky-making building you’ve drawn from your deck on this run is the Kiln then you can feed them, eventually–they’re just going to have to ration it more sparingly.

I loved making all these little choices as new buildings became available: Do I want to pick the Clothier to make lots of fancy coats to keep my villagers warm, or the Bakery because then I can make biscuits AND pies to tick off the food demands of two villager types? But if I go with the Clothier, can my Crude Workstation deliver enough fabric to keep? And if I’m baking biscuits and pies now, I’m suddenly going to need to find another source of flour. All the information you need to calculate these economic choices is presented in a clear, clean manner, allowing you to see at a glance where all your production bottlenecks are. And you can adjust production rates easily, to ensure you’re only making what you need and not wasting raw materials you might need for other things later. The intuitive interface and the powerful in-game atlas just let you get on with making the fun strategic decisions rather than clicking around on everything trying to work out why no one’s got any ale to drink this week.

Even the population types available to you on each run factor in to making your choices more interesting. There are four types of villagers: humans, beavers, lizards and harpies. Each type specialises in a particular type of work–lizards work best with meat, whether hunting or preparing, and love the heat of a kitchen or smelter or similar warm environment–and so juggling them between jobs, as the make-up of your population changes with new arrivals or unfortunate demises and you close certain buildings while open others, is an enjoyable management game in itself. 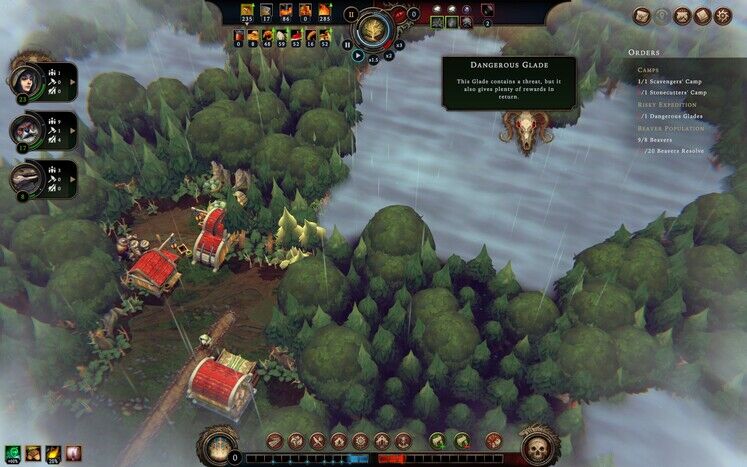 More interestingly, however, is that you’ll only ever have three of the four population types present on any one run. Start a map with no lizards and you’ve got to now cope with a firekeeper who’s less effective at tending the all-important Hearth at the centre of your village. No beavers and you’re down your usual woodcutting and engineering specialists. Instead, as with the types of buildings you might draw, or the resources you’ll uncover in a glade, you’ve got to improvise and learn to compensate for the missing population type. You’ll grow to understand the strengths of each and be able to adjust your approach wherever the random roll of each run takes you.

What I feared most about a Roguelite city-builder is that one run would end up feeling to similar to the previous run. Or that there’d be too much repetition as you go through the motions of throwing the same handful of buildings into the production queue once again. Or you’d land on a new map and think you’d seen it all before. With Against The Storm, those fears were unfounded. The random and procedurally generated aspects delivered by the deck-building and Roguelite structure end up keeping things fresh each run, throwing new obstacles and challenges in your way, and providing you with the tools to improvise solutions. Let the Blightstorm do its worst. I can’t wait to start over again.

AGAINST THE STORM VERDICT

Against The Storm is simply one of the best city-builders in years.

Discovering you can move–at no cost–many of the buildings in a settlement was a joyous revelation for someone who loves tweaking the town layout until it’s just perfect.

Against The Storm Essentials 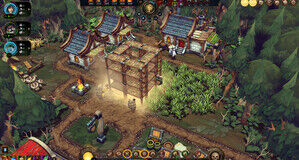