Honestly, just look at it would you? Apotheon. Just look at it. With its uniquely appealing and highly striking black pottery aesthetic, you wouldn’t be remiss for thinking you had just stumbled into some sort of ancient Greek fever dream. As it is, Apotheon combines striking visuals and a well-executed riff on the Castlevania formula to create the sort of experience that PC gamers have been craving since Guacamelee! rocked onto the scene a couple of years ago.

Kicking things off in earnest is the game’s plot. Apotheon casts players as Nikandreos, a Greek warrior stuck in the midst of a decidedly one-sided conflict between the gods of Mount Olympus and mankind. Basically, the gods (Zeus, mainly) have decided that they’re more than a little ticked off with man’s warring and nature pillaging ways and so, in an effort to wipe us out entirely, have withdrawn all of their otherworldly gifts from the Earth and left us to rot in dead land where crops don’t grow, the sun no longer shines and the forests are bereft of game to hunt. 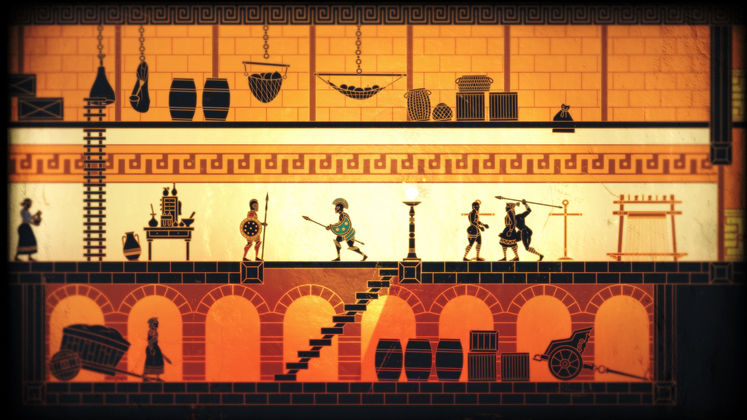 The upshot of this is that mankind has regressed into an almost completely savage state, resorting to raiding, killing, stealing and all other sorts of nastiness to try and claw back some sort of living before the last resources on Earth disappear for good. During a raid on his home town, Nikandreos is spirited away from the conflict by the goddess Hera, wife of Zeus, who imparts that as well as being less than pleased with her husband’s actions against mankind, is also rather miffed that the all-powerful lord of Olympus has been sexing up on anything with legs and a heartbeat.

Driven by its mythological soap opera, Apotheon’s plot intrigues and whether it’s the playful goddess of the hunt, Artemis, the downtrodden god of light Helios or the stuffy, arrogant nobility of Apollo (complete with his very own detestable groupies) it’s fair to say that the game’s supporting cast of characters is an entertaining ensemble.

Much like the story that acts as Apotheon’s backdrop, the game itself also borrows from yesteryear when it comes to the gameplay side of things, too. As pure a take as you’re likely to get on the adventure platformer formula established by the likes of Castlevania and Metroid, Apotheon follows in the footsteps of those classics that serve as its inspiration with verve and aplomb.

Earning new abilities that allow your hero to access previously unreachable areas is just one hook of the classic Castlevania formula that developer Alientrap nails. Where the developer changes things up a little though, is in the combat.

Whereas typical examples in the genre have your on-screen avatar striking or shooting in a linear fashion, Apotheon instead uses the mouse (or pad thumbstick) to allow players to explicitly aim their attacks in any manner that they see fit. As a result, the system permits sweeping uppercuts and downward swipes of the sword with the appropriate gesture on the analogue stick or mouse. 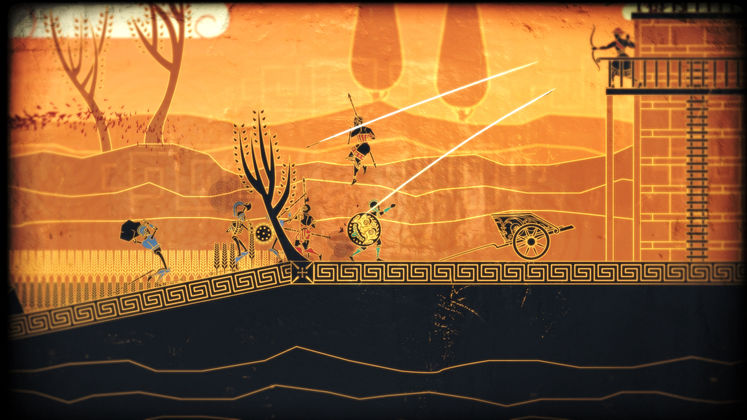 The whole thing can feel a little off at first, as the need to direct your strikes rather than have the usual canned animations do it for you feel a little unresponsive and unnecessarily weighty in the early going. Persevere though and the wide range of attacks and defensive manoeuvres that become available soon prove satisfying. Better yet, the entertaining combat is further compounded by Apotheon’s ridiculous havoc physics style animation system that see defeated enemies flying down staircases and crashing into walls with true crash dummy vigour.

Annoyingly though, the combat system doesn’t quite translate as well to ranged combat. Once more adopting the mouse/stick approach for directing attacks, it feels strangely imprecise and in situations where you have to aim and shoot targets against a bespoke time limit (usually indicated by some sort of impending death scenario) failure can happen all too often and gives rise to frustration that invariably follows.

As to the weapons themselves, players are spoilt with the variance of enemy murdering tools that they can get their mitts on. From daggers and stone throwing slings to swords, spears, bows and elaborate traps, the multitude of armaments in Apotheon is eminently welcoming to a wide range of playstyles. Elsewhere, the procurement of incrementally better quality armour from vendors and treasure chests allows your hero to withstand proportionally more abuse before his armour and health meters hit zero.

Still, while the availability of such weapons and items proves welcome, the inventory system that manages them is less well received. A hodgepodge of dropdown menus for each weapon, armour and item category that must be accessed by pausing the game, it feels unwieldy and counter-intuitive at the best of times, especially as it often causes Nikandreos to imbibe a healing potion or use a weapon when he wasn’t supposed to.

Aside from the frequent vanquishing of smaller enemies, Apotheon’s boss fights also happen to be pleasingly varied efforts too, ranging from the more straight-laced find the weak-spot affairs, to more interesting confrontations such as the battle with goddess of the Hunt, Artemis. In the latter, players first have to hunt the playful deity while she attempts to escape in the form of the deer and then, sometime into the fight, she swaps roles with the player being prey and Artemis being the predator; forcing the player to rush through special checkpoints in order to reverse the spell.

Away from the visceral delights of the game’s combat, Apotheon’s exploration also proves to be a joy as its myriad of locations provides a compelling hook to scout out every nook and cranny. Brittle walls can be broken down with Greek fire to reveal secret areas stuffed with loot while remote underwater areas and dark caves give rise to the sorts of locations that players might typically miss on their first playthrough. Simply, this is a game that you’ll want to explore of your own volition, rather than as the result of forced busywork and because of that the experience feels much more satisfying as a result. 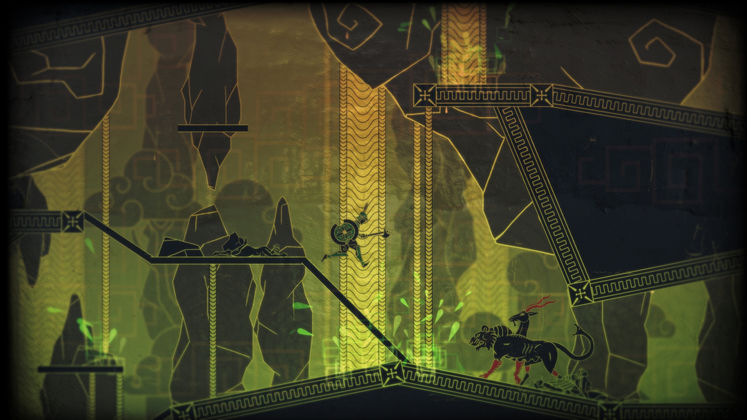 Like the best examples of the genre, Apotheon deftly combines platforming, exploration and combat with compelling character progression elements

For the more socially-minded, a local multiplayer exists but is sadly relegated to an adversarial arena mode which in all fairness seems more like a token multiplayer tack-on than a genuine attempt at creating something on par with the Apotheon’s superlative single-player experience. A pity.

Dig beneath the effortlessly stylish veneer of Apotheon though and it soon becomes clear that its impressive calibre bleeds through into its homage to the engrossing Castlevania and Metroid games pioneered back in the 8-bit days. And that folks, minor niggles aside, is a godly thing indeed.

Engaging in a hunt and hunted encounter with the goddess Artemis, where you swap roles as deer and hunter throughout. 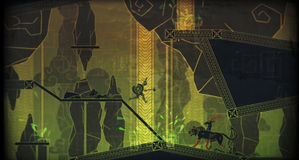