A classic-style point and click with some classic issues

With a nod and a wink to the old-school point and click adventure genre, AR-K tries to revive that old genre's charm but brings back clunky interfaces, obtuse puzzles and technical problems as well.

Starting life as a Kickstarter, AR-K made its $100,000 target and billed itself as an episodic point and click game, a homage to classic titles promising a twist to the usual adventure mechanics and story. After completing the first two episodes, the only content released thus far, I can’t say that there’s any twist to speak of. That may change as these first two episodes were developed prior to the Kickstarter with the funds raised ploughed into producing parts three and four.

However, chapters one and two are what we have right now and sadly they are mired in technical problems. AR-K also has a few issues with presentation and communicating what exactly the hell it is you do in the game leaving me with a feeling that this game isn’t anywhere near complete or ready for show-time.

But let’s get down to basics - AR-K is a point and click adventure game set upon a space station inhabited by humans and some over-sized anthropomorphic animal aliens. A bit like Animal Crossing characters on steroids. A bit.

Alicia Van Volish is our protagonist and she comes complete with some biting wit and occasional potty mouth put-downs. She’s in college training to be a journalist after being expelled from the police force after a mysterious sphere was found in her possession. Like most good democracies everyone freaks out about this and she’s disgraced and forced to leave the profession she loves, being falsely accused of stealing this plot-device golden orb.

Cue opening cut-scene and Alicia finds herself waking up after a night of passion with a now-departed stranger and a banging hangover. From here it’s up to you to uncover the conspiracy surrounding the sphere and what it has to do with you.

After the first few minutes two cutscenes explain the above and you’re left to figure out how to use the interface and what direction to take on your own. I don’t like handholding in video games (real life is cool) and there’s a certain expectation in adventure games that you’re going to get obtuse and bizarre leaps of logic to advance the plot - but here there’s little other than two blurry screenshots in the main menu to explain how you manipulate objects and deal with people.


This isn’t a critical hump as given enough time you can figure things out. More critical is the way you’re expected to care about the story and characters from the very beginning. Alicia is not immediately likeable as she’s snarky, mean and petty. Her dismissive attitude towards her depressive roommate won’t sit well with many and it took me most of the two chapters to even begin to warm to her. Not really ideal for an adventure game where charisma is critical to making these collections of pixels jump out at you.

The visuals aren’t great either and the way Alicia walks around the world has that Moonwalking style which makes her character model never look like it's actually touching the ground, giving AR-K a slight amateurish look and adding to the feeling that this is a very incomplete game.

What makes this a little worse is that the second chapter has a much improved visual interface and adds a 4th wall-breaking narrator, balancing out Alicia’s attitude and giving you some practical help as well. Why these features aren’t patched into the first chapter is a mystery as it would make the game much more accessible and the character far more likeable.

So that’s a lot of negatives but it’s not all bad. AR-K doesn’t have a saving grace with its humour but it goes a little way towards making this the kind of adventure game I like to play. Once Alicia’s snarky meanness is balanced by the Narrator her humour starts to work and the game’s occasional 4th wall breaking moments had me genuinely smiling.

The world itself is also fascinating and I’m really interested to explore more of this space station and find out what happens next. You don’t get to go much farther than skin-deep in these two chapters but the fact that I’m interested despite my concerns should tell you how much potential I think is here.


Another critical aspect with an adventure game is the voice acting and in this AR-K hits it out of the park considering the small development team. Given the diverse nature of characters the voice acting is just as varied and Alicia, despite my misgivings about her character, is voiced superbly. Which isn't a surprise as Tali'Zorah vas Normandy herself, Ash Sroka, was providing the vocals.

In its current state I have a hard time recommending AR-K to anyone. Sure, the humour is good and the world it creates is pretty interesting, if lacking in detail, but the technical and presentation issues really hamper the first crucial moments. If the developers can upgrade the first chapter with the same improvements they’ve made in the second then I’ll change my mind, but this is still too early to recommend a purchase.

In its current state I have a hard time recommending AR-K to anyone. Sure, the humour is good and the world it creates is pretty interesting, if lacking in detail, but the technical and presentation issues really hamper the first crucial moments. If the developers can upgrade the first chapter with the same improvements they’ve made in the second then I’ll change my mind, but this is still too early to recommend a purchase.

When the Narrator arrives and adds a bit of helpful charisma to the game. 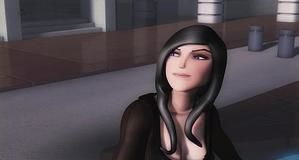