A flawed roguelike shooter that falls short of its target

A top-down roguelike shooter set in a Martian tech facility where a bunch of robots have decided that they just don’t like their meatbag overlords anymore, on paper at least, the concept behind Ares Omega would seem to be a pretty compelling one. If that all seems too good to be true that’s because sadly it is, simply because Ares Omega finds itself beset by a large number of flaws that make it difficult to recommend to anyone who might have a passing interest in either roguelike games or just blowing stuff up in general.

Once you get through the distinctly late 1990’s looking title and loading screens (complete with a reminder for you to “press any key” when it has finished loading), you’re taken into the tutorial for the game which shows you how the various guns shoot things, in addition to teaching a few other bits and pieces, like learning how to evade fire and blowing up things that have explosions in them. There’s no deep story here, extra modes or multiplayer, there’s just you, a bunch of robots that need wrecking and a constant need to upgrade both yourself and your firearms of choice. 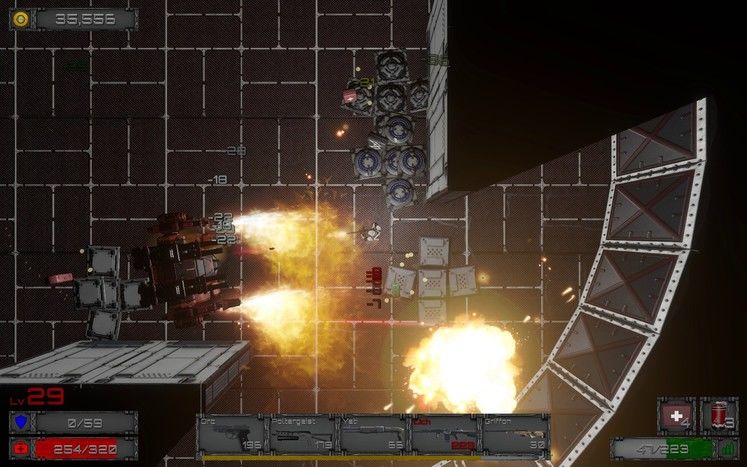 In situations like this, hiding behind the nearest wall is pretty much the best thing you can do

In a nutshell then, there’s not actually a whole lot to Ares Omega which makes it a little baffling how the game manages to misfire on so many different cylinders at once. Take the level design for example, the boxy, generally featureless rooms that you’re exposed to in the tutorial could be excused if they were utilised purely for that function. However, matters improve little once you get stuck into the game proper; the rudimentary map layouts with their flair-free, largely monochromatic chambers only serving to further reaffirm the insipid blandness of the maps seen in the Ares Omega’s opening minutes. Honestly, you wouldn’t know that the game was set on Mars were it not for the title screen and the throwaway bit of narrative text at the beginning.

Such a tragic shortfall in imagination and creativeness isn’t just limited to the level design either, as the hostile denizens that populate Ares Omega’s drab metallic rooms seemingly crib generously from the Book of Generic Robot Enemies 2002 Edition, with gun-stuffed ED 209 style mechs being accompanied by a smattering of reused drones, turrets and spider bots to name a few. The main player character doesn’t even get a chance to escape unscathed either, as the poor sod looks like a soft-headed version of Robocop with an Imperial Stormtrooper fetish. A fresh visual take on the top-down sci-fi robot blaster Ares Omega is not.

Being bereft of polish is not a death knell for any game by itself so long as the fundamentals that exist beneath it are solid. With Ares Omega those fundamentals are there, certainly, they’re just not especially well executed. Key to any sort of action title, regardless of visual perspective or setting, is a high-degree of responsive movement that allows you to manoeuvre around the environment with as little hassle as possible. In Ares Omega, such a thing is a pipe dream; the total lack of a sprint button and an overly long cooldown period on your default roll evasion move means that far too much time is spent plodding through the game’s procedurally generated levels, rather than sprinting about the place with the sort of reckless abandon that other games would typically encourage. Sure enough a speed upgrade can be obtained later on in the game, but it’s not enough to make any sort of real difference. 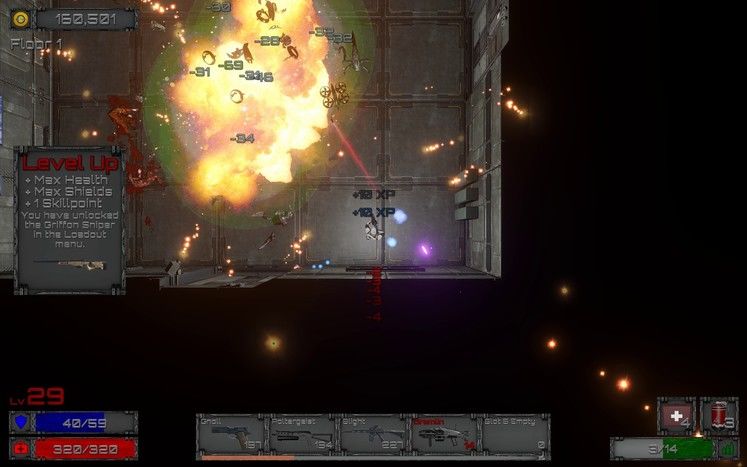 Those explosions though. So sexy

When it comes to the AI of your robotic foes, they are anything but challenging as they plod towards you with all the grace of an intoxicated Andre the Giant (assuming they’re not a turret), as they simply fire until either you die or they do. What also doesn’t inspire much confidence is the manner in which each map is constructed, too. Though generated randomly, there doesn’t appear to be any real deep set of design rules in place with the repetitious map layouts and haphazard placement of supply crates and incendiary cannisters occasionally livened up by secret rooms hidden behind the odd crumbling wall.

Shoddy AI and lethargic player movement aside, the gunplay in Ares Omega is not entirely without merit or nuance. While combat can usually be contested out in the open, the game rewards players who are able to lure their robotic enemies close enough to some explosive cannisters for an easy kill. With tougher enemies this usually involves kiting them back through the level to wherever you have left some cannisters behind, while more difficult still are the four end of area bosses whose formidable firepower must be mitigated by carefully using your evasion rolls and ducking into cover to recharge your shields at the earliest opportunity.

Additionally, once your shield has been depleted and your health bar starts to take a bit of a kicking, you must set about stitching yourself up with any spare medikits that you hopefully have on hand. The kicker though, is that while you’re patching yourself up, you’re unable to move or shoot and thusly healing must be done well away from the harassment of your enemies lest you perish even quicker. When it comes to the firearms, the weapons in Ares Omega also have a satisfying amount of pop to them too, from different classes of pistols to rocket launchers and just about everything in-between, letting lose a round or ten never feels or sounds like a low-key endeavour.

What is odd though is how the weapon swapping mechanic is handled in Ares Omega. You see, whenever you switch from one weapon to another, your character immediately begins reloading it even if that particular firearm has already been previously reloaded without being fired. While such a thing might border on triviality, it becomes a bit more of a serious problem when you’re being hammered on all sides and need to change weapons quickly after exhausting your ammo for your current firearm. 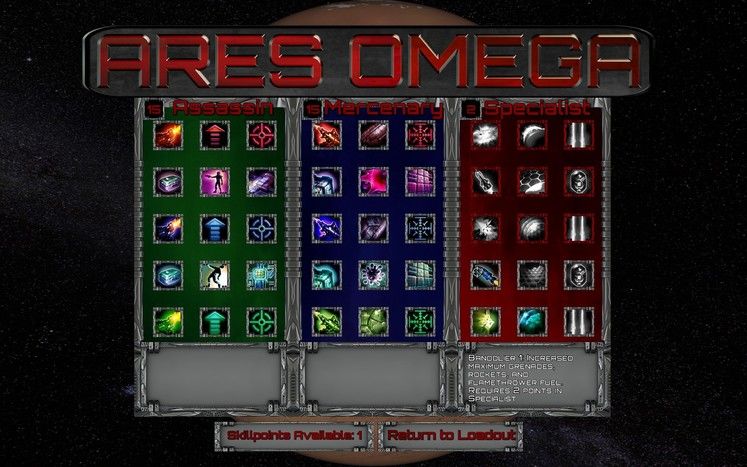 There are a wide variety of skills that you can develop

Underpinning the traditional top-down shooter beats of Ares Omega is the roguelike core that sits at the centre of the experience and it’s something which is both largely sound and rather compelling. Take your health and rechargeable shield for example; both are upgraded every time you rack up enough experience points from destroying robots, while skill points are also accrued and these may be ploughed into three different skill trees with assassin, specialist and mercenary trees each focusing on increasing evasion, damage and durability respectively. Elsewhere, money which can be scooped up from fallen enemies can be used to purchase new and additional weapons to supplement the default pistol and submachine loadout that you usually start with. Clearly from a progression standpoint at least, Ares Omega provides plenty of incentive for the player to keep plugging away.

Somewhat notable too is the manner in which skills and new weapons are doled out to the player in Ares Omega. Rather than being able to spend your hard won funds and experience points immediately as you might be able to do in other similar genre efforts, Ares Omega only allows the player to do so when reloading a save after a failed run. It’s a neat system that when combined with the pleasingly large amount of unlockable skills and weapons on offer makes Ares Omega arguably more compelling than it has any real right to be.

What should have been a glorious marriage of Binary Domain and Smash TV in Ares Omega ends up as something far lesser on account of its many flaws. While a serviceable roguelike shooter ticks away at its heart, there simply isn’t enough here to recommend Ares Omega to anybody with a hankering for a well-crafted, progression focused blaster. 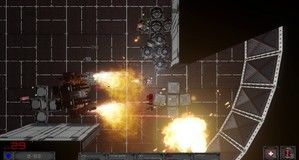