As Far As The Eye

As Far As The Eye Review

Exactly as much as meets The Eye 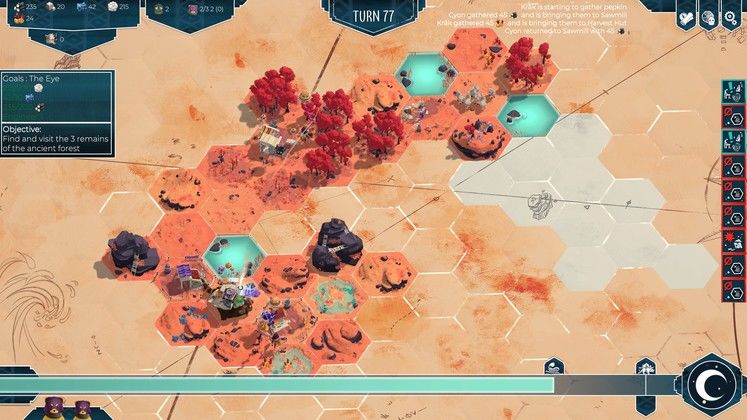 As Far As The Eye has an interesting concept: every few years in a world where tribes of little creatures called Pupils magically coexist with nature, a huge storm blows through and floods the land. Every few cycles, all the tribes must make their way to the eye of the storm – the eponymous The Eye – in order to survive the cataclysm, sharing and partying in a huge social event called the Great Meeting before setting out into the world again when the waters recede.

The pitch of the game is that you – as “the Wind” – magically controls a little tribe as they make their way to the eye on the back of a caravan and stop in places along the way to gather resources. I pictured a strategy game with an expansive map doomed by an ever-approaching disaster, but instead, As Far As The Eye is a series of standalone, separate little areas usually made up of a few dozen hexes. It’s not a strategy game, but a puzzle game – and a repetitive one at that. 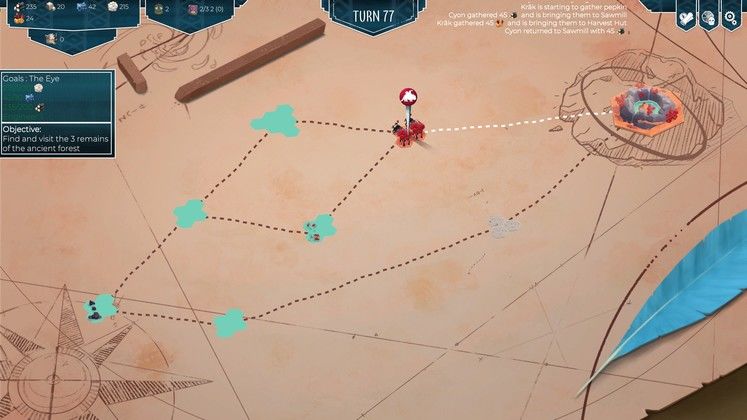 As Far As The Eye is a game about optimisation, where you rush against the turn-based clock to gather as many resources as you need to move to the next area. The areas are all connected as part of a big journey to The Eye, and you must consistently balance food and resource gathering with building and management duties. Each pupil can be assigned to a number of depletable resources – some of which require a special building nearby to be harvested – and your tribesman level up as they work, allowing players to shape their direction in a very broad skill ball made up of several skill trees.

As each Pupil is assigned to a task, they change forms at will – a Red Panda for gathering, a bird for construction, so on and so forth – and move around the world performing their tasks in peace. The game actually features a fair number of specialisations, opening up new construction options and even allowing you to create recipes such as pies and breads from the resources you gather. Some of those perks are mutually exclusive, forcing you to choose a path for that particular Pupil, but some perks also apply regardless of which form they currently have. 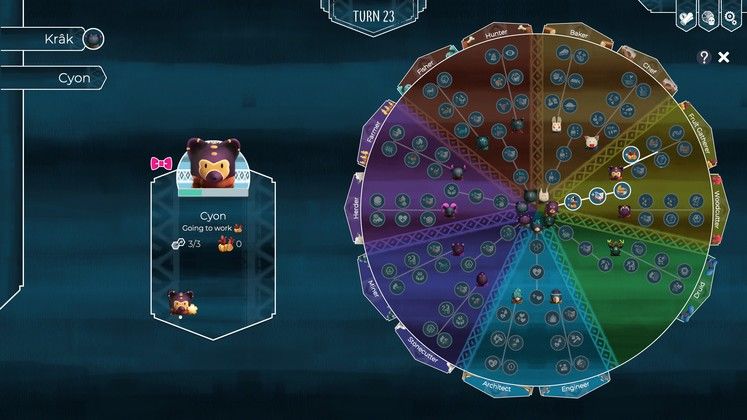 Although a survival game, As Far As The Eye is a peaceful title – the music is soothing and low-key, environments are pretty and colourful, and everything from lore and animal husbandry is treated in a caring and loving way. There is no combat or enemies in AFATE’s universe – even Pupils that die merely “rejoin the Wind to guide future Pupils.”

Lending further weight to the idea of a cycle, players can carry gathered resources and mobile buildings – but not static ones – to the next interconnected region on the back of their caravans. This opens up an old-school inventory system unlike those of Deus Ex or Diablo, forcing you to move items around and slot them to make everything fit, and anything that doesn’t find a place gets left behind. 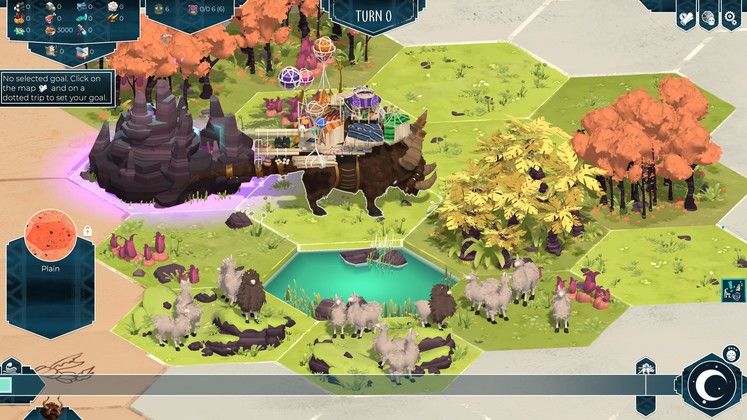 However, the game focuses on the idea of a peaceful existence with nature, and disasters in the forms of “vagaries” can appear if a player gathers many more resources than needed to move on to the next level. These can range from diseases that damage Pupils to lightning strikes that burn down whole forests (and damage Pupils), forcing you to sometimes change your priorities.

Technically, the game is capable. A full 3D camera lets you fully bask in the unique and colourful art style, while the soundscape’s FX and soundtracks help build a very relaxing experience. The controls are also perfectly serviceable, and even the performance was a steady 60fps in my 4K setup. 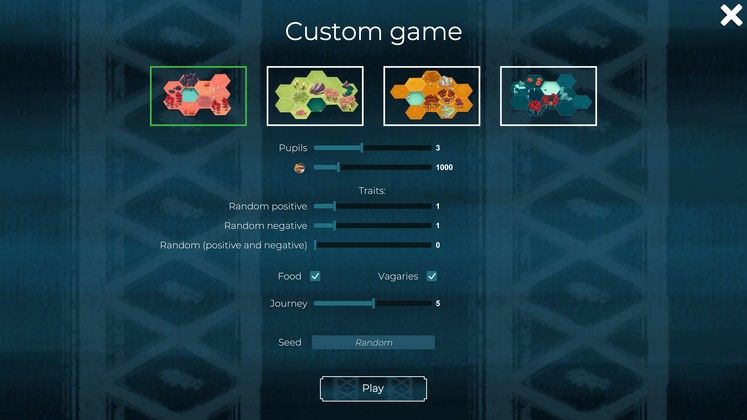 I have to admit I found the actual lore unnecessarily fluffed to the point of obtuseness. A semi-poetic writing full of names/titles and little flourishes with twists and turns try to sell you on a “spiritual” world, but it just ends up striking you as too much, as if the game was trying too hard to make the writing less functional and “oh so mystical and connected to nature”. It’s just a tiny bit too out there, and by the fourth tutorial, I was skimming the texts instead of actually reading them because I just stopped caring for the language used and the picture it tried to paint.

The game itself, however, is fine – if a little bit repetitive. The indie tag kinda bellies that, but the fact the game is turn-based (aka you need to click a button/press space to end the turn up to 80 times per map) and that levels are actually a series of self-contained little regions makes it that much more noticeable. Once you have played all the campaign missions and a handful of the custom mode’s regions, each involving the same “harvest enough resources to move to the next little map, then repeat 3 to 6 times per level” routine, you’ll have more than enough of the general gameplay loop to last a while.

As Far As The Eye is an interesting title, but it feels more artistic than functional. It is a perfectly serviceable game and it has lovely production values, but this is not the kind of title you look to for depth or range. On the other hand, if you want a specific, focused peaceful survival experience about tribes making their way to a safe place and don’t mind this being more of a puzzle than a proper strategy game, definitely give this little indie title a try.

AS FAR AS THE EYE VERDICT

A simple puzzle game that accomplishes what it sets out to do.

Arriving into a new map for the first time and slowly exploring the many hexes to plan your little temporary tribe colony.

As Far As The Eye Essentials