Liberated from the shackles of portability, can Aveline stand alongside the rest of her brotherhood?

After Assassin's Creed 3 and Revelations I'd lost my interest in Ubisoft's stealthy franchise. Ubisoft had lost the magic and I walked away. Despite the good press, I just couldn't bring myself to even try Black Flag. But what about Assassin's Creed Liberation HD? It started life as a PS VITA companion game to the game that turned me away. Could it really offer something that its old big brother couldn't?

Well it's telling that for this remake Ubisoft have dropped the '3' part of the title. Of course, what's far more important is that this is also the first Assassin's Creed to star a female in the lead role, and what a job she does. Aveline's also why I find it mind boggling that this was the 'supplementary' title and not the main one. Compare her to her compatriot Connor, and Aveline is a way more interesting character. Striving out for freedom and liberty in a way that the guy who was meant to be fighting in the American Revolution never did. Instead of acting like a petulant child, Aveline is getting shit done. A black female assassin who is doing everything she can to help out slaves. It doesn't take long in the game for her to start questioning orders and doing things her own way, realising that she might be manipulated.


Though the majority of her moves are lifted straight from Connor, she has one or two of her own, including a whip for that Indiana Jones feel – not to mention the fantastic image of a black woman wielding one in heavy slave country – and Chain Kill. Chain Kill is her big selling point, which pauses time and allows you to pick certain enemies to insta-kill. A lovely animation plays out and then you're back in control. It could feel cheap, but instead makes Aveline look even more kick ass, though a little bit more love for the animations wouldn't have gone amiss.

Aveline's also a great assassin and it's safe to say that the public persona she shows is not the same person running around rooftops. In public, and in front of her family, she appears relatively weak, a normal for the times lady who dotes on her loving father and has an understandable soft spot for the slaves. Only the other members of her Brotherhood and her targets really get to see the real Aveline, who is hard as nails and out for justice.

That's the thing about our leading lady. She's the first Assassin we've come across in quite some time who understand what it means to blend in. Altair's iconic white clothes and hood helped him blend in with the monks of the time. The problem with it being iconic was that everyone else copied him, with only minor tweaks to their costume. Connor in particular stood out a mile in his hood in Revolutionary New York, especially with that huge bow he carried at all times. Aveline is sensible, her look reflects the time far more than any other assassin except the original, and instead of a bow she has an easily concealable blowpipe. But more than that, she has a couple of other disguises to help her fit in.

She can flaunt around town as a Lady, or keep her head down in slave get up. It's not just a cosmetic change either, as the game plays slightly different for each persona. The Lady has limited access to weaponry, with just a hidden blade and a umbrella with poisoned darts James Bond would be proud of. However, she can't free run like the other two. But to her credit, the guards pay less attention to Lady Aveline so her notoriety is a lot slower to build.


As a slave, she has a couple more weapons, and free running is back. Yet a slave acting up is going to draw guards a lot quicker. Finally, as an Assassin, Aveline can have all the weapons under the sun, but her notoriety can never be nil. She's a recognisable figure in those clothes and the guards are constantly on the look for the murderer bounding over their roofs. It makes so much sense, and adds a nice degree of complexity. You can't help but wonder why it took this long for someone in Ubisoft to add to it.

It's amusing, if not rather frustrating, then that for the one mission where Aveline goes to meet Connor, some of the old problems with AC3 gameplay resurface, such as needless flybys of the route you're supposed to run, and wrenching control away from the player. But only for that mission. It's as if Ubisoft Sofia are having a very slight dig at their big brother.

It is hard to ignore that this is clearly a companion game to AC3. Even with the updates there's the slightly lacklustre look of the game, it's not that bad, though I did witness a horrible riot with a total of seven people. There can be a few graphical glitches here and there, and I've seen a few people complain it's a lot buggier than the original version. Personally though, I had one big crash, everything else was easily ignorable.

On the other hand, the plot is a nice take on the same concept, and is probably a stronger story than Connor's, but its portable beginnings mean that it's delivered in a few short chunks rather than a properly flowing narrative. Explanations sometimes coming via text box in loading screens instead of in a cutscene, and even then there's a couple of points where you wonder if you missed a conversation or not. As a result sometimes the plot falters were it shouldn't, but Aveline's struggle still mostly hits home, far more than her Northern Brother.

In the game itself there's another trading system, the bayou instead of the frontier, and the canoes that were strangely cut from the bigger game. But, again showing its portable upbringing, cuts out a lot of what felt bloated in AC3. Even the trading system, which was a pain, makes sense here and is actually usable.


Liberation offers an Assassin's Creed experience that is slimmed down to its more essential components. Alongside the bloated AC3 this is a God send. But for those that have played Black Flag I'm not so sure. If you're a fan, this is a definite play. If you've been burnt out and are looking for a cheap entry to have your faith restored, Liberation offers a good, short, no frills jaunt back in to the Animus.

Perhaps this is greatest compliment I can pay Liberation. This game restored my faith. Ubisoft can still produce a good Assassin’s Creed game. It’s a shame this wasn’t the big release instead of Connor’s outing. Aveline’s a more interesting main character, and the story is much more personal, instead of the crazy history stroking the main series became. After thoroughly enjoying my time in New Orleans, I’m finally ready to go see what Edward Kenway has to offer.

I’ve not had this much fun stalking opponents and leaping from roofs in a long time. 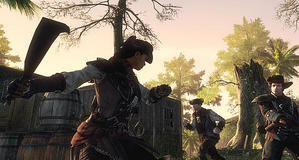