The remastered version of the Indomitable Gauls’ latest adventure is here, but is it worth going back to Las Vegum? 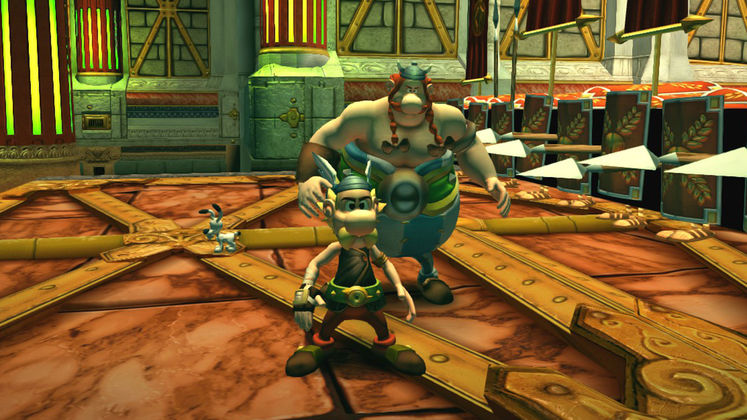 The original version of Asterix and Obelix XXL 2 was released in 2005, a full 13 years ago - and other than handheld, mobile, and that one dodgy Olympic Games title, it was the last Asterix game released on PC and consoles. Now there’s a third game coming from publisher Microids, and we’re checking out the remastered version of XXL 2.

Otherwise known as Mission Las Vegum, Asterix and Obelix XXL 2 has received a shiny update, but how far does it go? Does it meet modern standards, and is the game still worth returning to? Let’s find out. And no, we can’t explain why Asterix’s actor is Welsh. 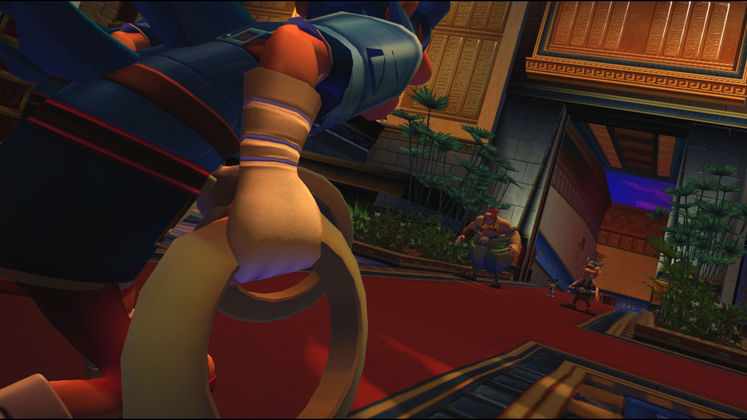 I’m going to proceed with the assumption that you know about Asterix the Gaul, the comic book adventures by Goscinny and Uderzo, and the general setup - mostly because if you’re not familiar with Asterix, you’ll be totally lost here as XXL 2 makes no effort to catch you up. We’d advise you actually be a fan before jumping in, as it’s a fan-friendly game - but not a generally great game. (I’ll also be going with the English character names, since that’s the version I played)

The story is that the druid Getafix has inexplicably turned traitor, becoming loyal to Julius Caesar and selling out his fellow druids to the Romans. He’s been seen at Las Vegum - a theme park that Caesar is building. Asterix and Obelix, with the help of green-goggle-wearing spy Sam Schieffer, travel to Las Vegum to find the truth about Getafix and recover the captured druids. Yes, Sam Schieffer is a pretty dumb parody of Sam Fisher, the main character of the Splinter Cell series. That’s only the tip of the iceberg for XXL 2. 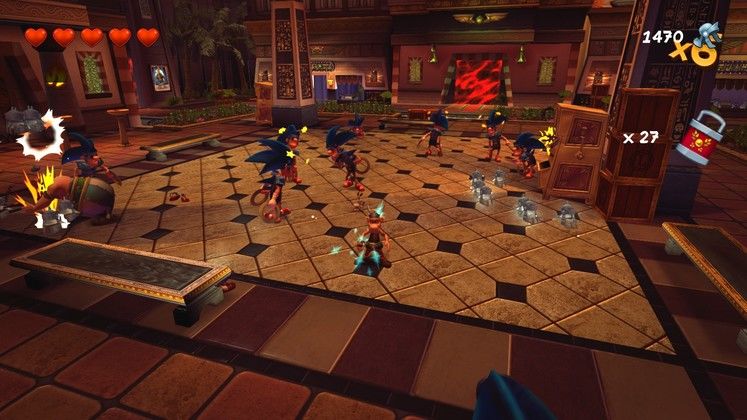 Not content with making a world that’s a cross between Las Vegas and Disneyworld, the developers also throw in major references to every single videogame ever made. Some are just randomly in the background, but most of the major adversaries you’ll face are videogame parodies - there are enemies based on Sonic, Mario, Pac-Man, Ken from Street Fighter, and even Rayman. While most of these stand the test of time most are just there for the heck of it - and some don’t work at all, like the fat Roman man in Lara Croft shorts being called “Larry Craft” instead of “Laracroftus” or “Tombraidus” or something fitting with Asterix Roman names. Ditto Sam Schieffer, especially when “Samfishus” would’ve been utterly perfect.

In terms of game, Asterix and Obelix XXL 2 can best be described as a 3D version of a side-scrolling beat-em-up like Streets of Rage or The Simpsons Arcade Game, with a smattering of simple puzzles, platforming, and exploration thrown in. You will be hitting a lot of Romans in this game. Just when you think “surely this wave has to be over now” it carries on, and on, and on. 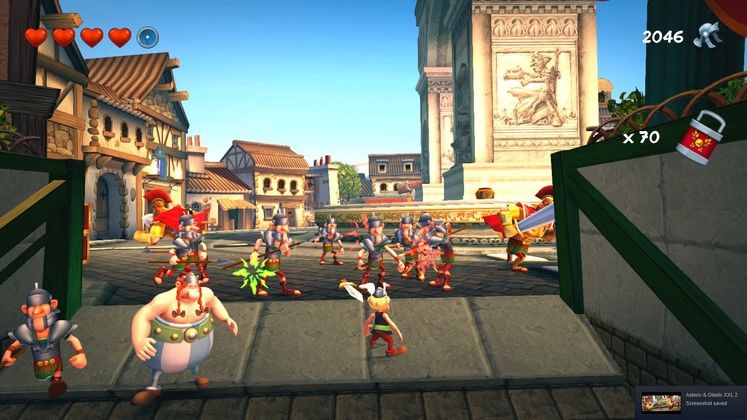 The worst part is that there’s honestly not much challenge to it, as long as you keep jumping away from attacks and using stunned enemies as weapons. So the fighting just keeps on going on for longer than is necessary. Considering combat is the focus of the game there should be more to do other than hammering buttons. I’d ask for more challenge at least, but frankly the camera would make things too infuriating.

The levels at least are amusing and fun to look at and play in, with parodies of various locations like Paris, Venice, Wrestling arenas and more. The only one I don’t get, which clearly shows that the original translators didn’t get Asterix at all, is the Las Vegas Caesar’s Palace parody. Should’ve been easy considering you’re fighting against the actual Caesar, right? Well, for some reason it’s called “SeizeUs Palace” which absolutely boggles my mind. Still, the game’s generally fun to explore, when the early 3D platforming camera doesn’t get stuck on scenery and gets you killed.

MINIMUM: RECOMMENDED: On to the most important part of the review - how good a remaster is it? Our system is an AMD FX-8300 Six-Core Processor, 16 Gb RAM, Nvidia GTX 1050 Ti 4Gb, and Windows 10 64-Bit, and that was way more than enough for this game. While it’s still blatantly from 2005, especially when it comes to the tiny grainy pre-recorded cutscenes, it all looks nice - supporting modern resolutions, crisp textures, and the cartoon style hides any further ills. Other than the terrible camera it controls fine too. I wish the shadows were better for the 3D platforming sections, but other than that and the videos I’ve got no complaints about the remaster. 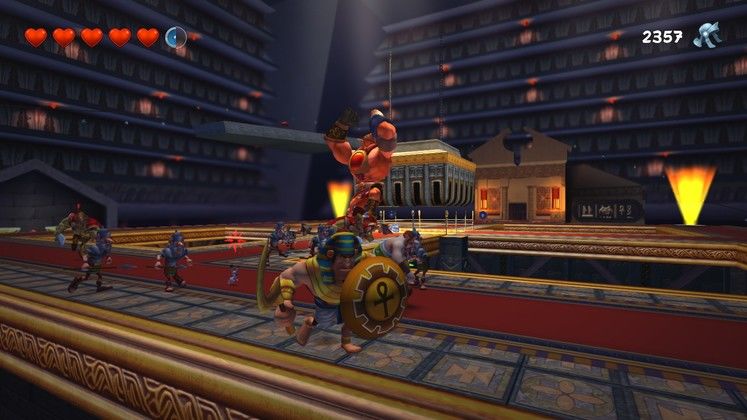 As an Asterix fan who’s wanted a new videogame since, well, 2005, and who luckily hadn’t played the original, I was pleasantly impressed with how well Asterix and Obelix XXL 2 both stood up and looked today. The game itself is a simple 3D beat-em-up platformer that could really do with deeper gameplay, but is generally fun and has imaginative levels at least - despite the annoying camera. The Asterix and Obelix license is generally well-served, but we’re not sure whether the videogame parodies helped. The remaster is straightforward, and doesn’t extend to the cutscenes which look utterly out-of-place now, but the main game looks pretty modern and that’ll do for us.

I admit, I’m the target audience for this game, so I probably enjoyed it more than the average gamer. If you’re an Asterix fan who either hasn’t played XXL 2 or wants to play it again, this is certainly worth picking up, despite the game itself being a bit more simplistic and repetitious than it needs to be. A fun Asterix game and a decent remaster, so a goodish score. But why by Belanos isn’t Sam Schieffer called Samfishus?!

The little conversations between Asterix and Obelix are cute. Wish there were more of them. 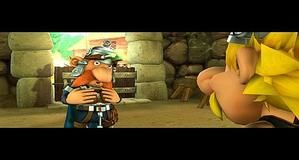