Attack on Titan: Wings of Freedom

It's a titanic effort to adapt the anime

Attack on Titan: Wings of Freedom is a messy game. Some gameplay features barely work right, the camera is all over the place, and the basic structure is so meandering and confused that the campaign can’t coalesce into a compelling whole. Those are all things you might expect to say about a licensed title. I did not expect to say that the central concept, swinging around an environment and taking down giant enemies, is deep, compelling, and most of all–fun. A lot of issues hold Attack on Titan back from being a great game, but the core, moment-to-moment combat is surprisingly good.

Attack on Titan: Wings of Freedom

It's a titanic effort to adapt the anime.

The game retells the story of the anime’s original 25 episodes. Massive, grotesquely human creatures called Titans appeared a century ago, gobbling up men and women to feed an insatiable appetite. Humanity retreated behind a three-tiered set of walls which have mostly protected them from attacks, but after a sudden blow from a Titan of unprecedented size, one of the biggest gates has gone down and Titans are pouring in. 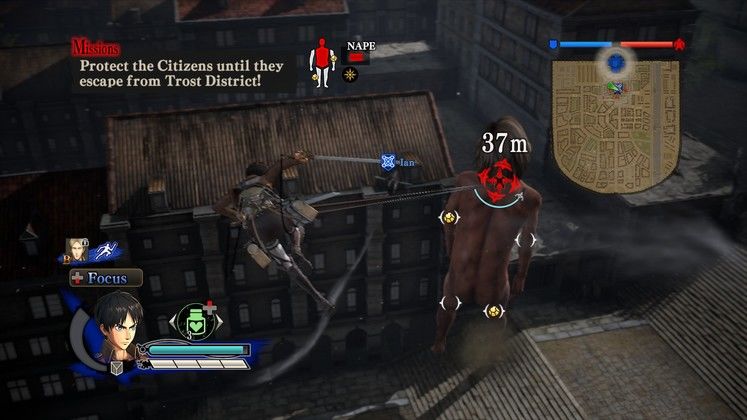 The Scout Regiment is the only line of attack on Titans, and they use a piece of equipment called Omni-Directional Mobility Gear to take to the air and take on their monstrous opponents. If you’re not familiar with the show, you could think of the Scouts as a squad of Spider-Men, swinging through the town to fight giant bad guys.

This is what the game is best at, building up a set of mid-air combat mechanics that are fast, fluid, and fun. You’ll fire an anchor into a Titan’s targeted body part, orbit that part until you find the right vector of attack, then reel yourself in to deliver a blow. Taking out the legs will limit a Titan’s mobility and taking out its arms will keep it from attacking, but the only spot to deliver a mortal blow is at the back of the neck. 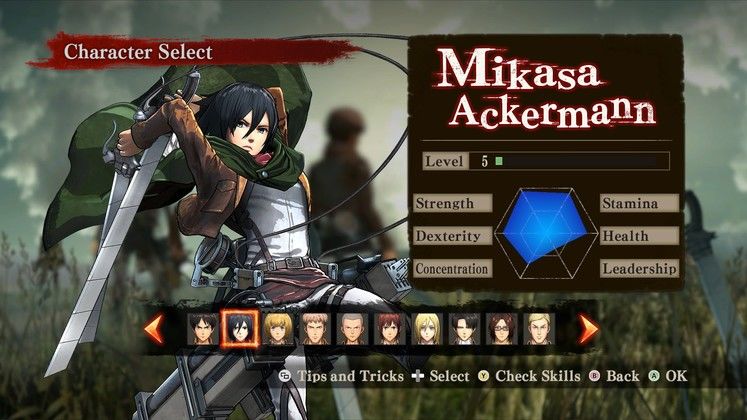 The controls are initially very unintuitive, and the poor tutorials do little to alleviate that. However, once you get the hang of it, swinging around, picking off Titan limbs, making mid-air adjustments, and angling in for the killing blow is a ton of fun, and taking down groups of Titans is always exciting and satisfying. The only problem is the camera, which can occasionally get stuck in and around tight spaces, making it tough to keep track of the fast-moving action. This issue isn’t a constant problem, but it’s frequent enough to be frustrating.

Even just maneuvering around the levels is a great time, with a terrific sense of speed that calls to mind the best of the 3D Spider-Man games. The game was developed by Omega Force, the same Koei Tecmo division behind the Dynasty Warriors series, and that influence shows through the open maps with multiple objectives to complete at any given time. The optional objectives might give you additional squad members or extra items. 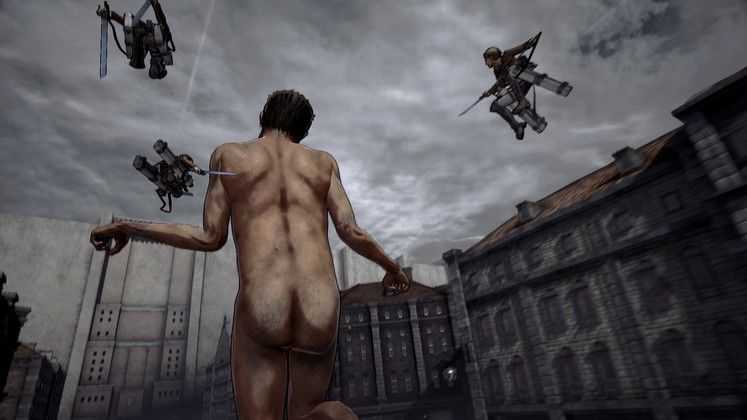 Those are rarely necessary, though, at least through the main campaign, as the game never gets especially difficult in its core missions. The only things you need to pay a ton of attention to are your reserves of blades and Mobility Gear gas, both of which are constantly depleting and require a frustrating few seconds out of the action to replenish.

Each of the characters you’ll take control of level up independently and have unique abilities. Some have a powerful attack that you can only execute if you charge in from a great enough distance. Others can chain attacks together, delivering a combo strike across multiple limbs. Still others can command teammates to attack certain parts.

The core campaign retells the story of the anime through a combination of 3D-rendered cutscenes and static, dialog-box filled conversations. There’s nothing terrible about how any of the show’s elements are retold here, but they’re all told far more effectively in the show itself. The version of events here is neither complete enough to entertain newcomers nor different enough to offer anything valuable to fans of the series. The game is all action, which is to be expected, but it lacks the tinges of horror and desperation that power the show’s well-realized melodrama. 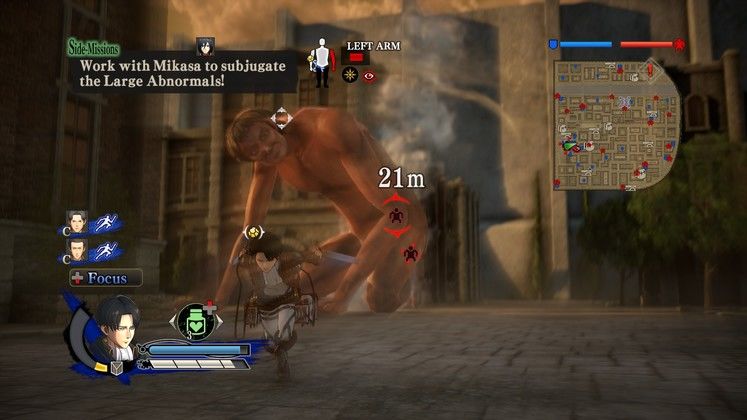 Sometimes a tactical retreat is the way to go

The biggest issue is that for as much fun as the core combat can be, there simply isn’t a compelling structure tying it all together. There’s a cast of characters to level up, along with a full upgrade system requiring you to collect crafting materials to get better gear, but none of the upgrades are especially meaningful, only adding the stat boosts you need to take down the next more powerful set of Titans. Even the character abilities earned from levelling up eventually turn out to simply be the early skills that different Scouts already know.

Once the events covered by the anime wrap up, the game switches gears to a more sandbox-style mission structure, where you’ve got to go out on story-free expeditions that can often be completed in a matter of seconds if you don’t care about your mission rank. If you do care about rank, then it’s just a matter of spending the time to kill every Titan on the map.

The appearance of optional, cross-mission side objectives, like killing a certain number of Titans or destroying a given number of limbs, do little to ease the repetition of these expeditions. Grinding out those side missions, though, is necessary to see the handful of Epilogue story stages and the unique boss Titan that comes along with them. However, by the time I’d seen even a couple of these final levels, I’d had more than my fill of the game. 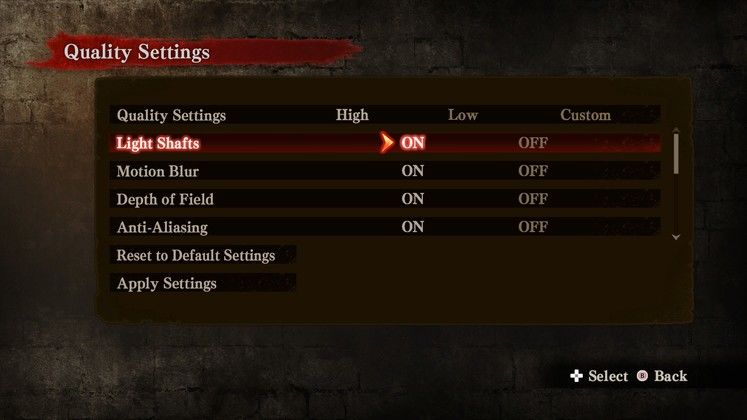 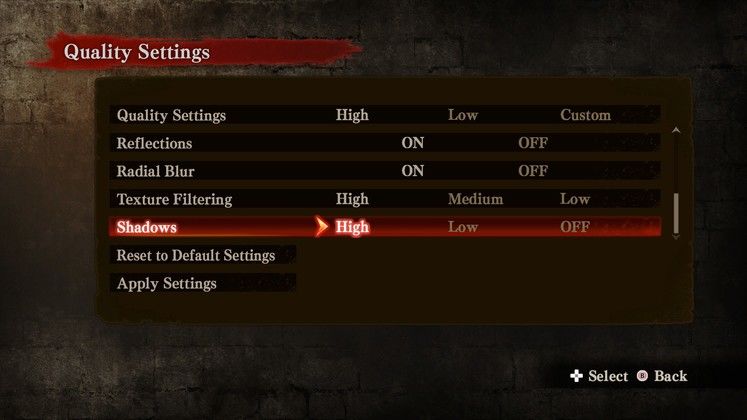 As with many PC releases of Japanese-developed action games, this version is clearly a port, with very console-focused UI and controls very much built around a gamepad. Despite that, the performance is excellent and the graphical features offer a fair amount of customizability and room for tweaking. There is one notable exception, though, as I couldn’t find any way to enable V-Sync in-game, and screen tearing is quite noticeable without it. Forcing V-Sync via my graphics card’s control panel was an easy enough fix, but it’s the only knock against this otherwise solid port.

Attack on Titan is a good game, but not a great one. It does a tremendous job of adapting the anime’s excellent action scenes to an exciting set of game mechanics, but struggles to extend that fun core into full-length game. Any given fifteen seconds of Attack on Titan is excellent, but those fifteen seconds are repeated again and again until they’re no longer compelling.

The moment the controls click and you’re able to quickly, effortlessly take down a Titan without ever touching the ground. 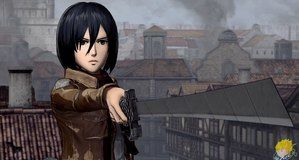 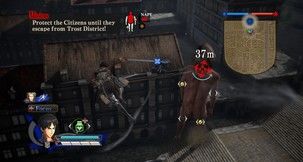