Well well well, look what the bat dragged in. A quick recap: in June (June!) this year Batman: Arkham Knight, the long-awaited final chapter in Rocksteady’s epic Batman Arkhamverse trilogy was released… and swiftly pulled from sale. As you undoubtedly know, the PC version of Arkham Knight was a mess. Barely any graphics options, tons of bugs, a poor 30 FPS cap, and extraordinarily badly optimized. The vast majority of gamers were left with a game that chugged and lagged at every opportunity. Now, just four months later, at last Warner Bros and Rocksteady have deemed Batman: Arkham Knight fit for consumption on PC. Now we can finally judge it. Get the punching bag ready.

For anyone who doesn’t know, the story starts a few years after the events of Arkham City, which I gave a 10 to incidentally, mostly because it worked fine on PC at launch. The Joker’s dead, crime is at an all-time low, and nothing can possibli go wrong - until it does. The Scarecrow unleashes his fear toxin on Gotham, the city evacuates, and a new foe called the Arkham Knight and his well-trained militia takes over the city. It’s up to Batman to take Gotham back, but the cost might be too great this time.

A lovely setup, and if you haven’t had the whole thing spoiled for you by now I won’t either - but I will say that there is at least one excellent twist involving the Joker, and the story is excellently acted by the likes of longtime Perfect Batman Kevin Conroy and veteran film actor John Noble doing a creepy Scarecrow. That all said, the plot simply didn’t grip me as much as any of the previous Arkham games, including Origins. Apart from the aforementioned early twist it’s all pretty predictable, and anyone with a halfway modern knowledge of Batman comics will have deduced Arkham Knight’s boring identity as soon as he appears - and everyone else will get it halfway into the game. There’s not enough threat, especially with Gotham completely emptied, and the side-villains like Two-Face and the Penguin feel crowbarred in. The other Arkhams had me hooked from beginning until end, but here I was bored. 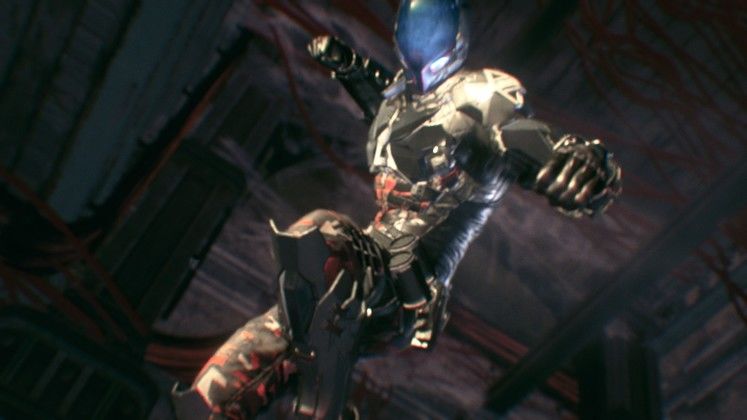 Anyone care who this guy is?

Well, at least story-wise. In terms of actual gameplay Batman: Arkham Knight is mostly amazing. The combat is still superb, besting all the imitators and just feeling more rhythmic than the “this just feels wrong” of Arkham Origins, meaning that every fight is fun. The addition of Fear Takedowns that allow you to quickly take out up to five enemies seems initially cheap, but once you realise just how many enemies you’ll be facing having the opportunity to quickly dispatch a few in heavily dramatic fashion becomes very welcome. There’s even the odd moment where you can play other characters too, which are a neat change of pace. Stealth encounters have similarly been tweaked with the additions of vertical vents and more intelligent enemies. This is definitely to be played after Arkham Asylum and City as the difficulty in both Combat and Silent Predator areas takes into account that we’re all Batman veterans now. Which I’m fine with, although those armoured bastards are a bit of a pain.

It’s Gotham City though that’s the star of the show, not Batman. It’s wonderfully realised, with an insane attention to detail that Arkham Origins just lacked. There would be some buildings in Warner Montreal’s Batman title for example that you wouldn’t be able to grapple on, there would be barriers where there shouldn’t be, or places like under the bridge that were just boring to explore. Rocksteady never fall into this trap. There’s always a grapple point, Batman can get around Gotham smoothly and easily, and it is never boring to explore. There’s detail everywhere, from greater DC Comics universe references to what Batman starts seeing after he gets a dose of Fear Toxin - it’s awesome, it’s so subtle I had to have it pointed out to me, and no I’m not going to spoil it. Just watch the posters and statues around Gotham carefully. It’s all the ultimate culmination of everything Rocksteady has been doing with Batman and it’s wonderful. 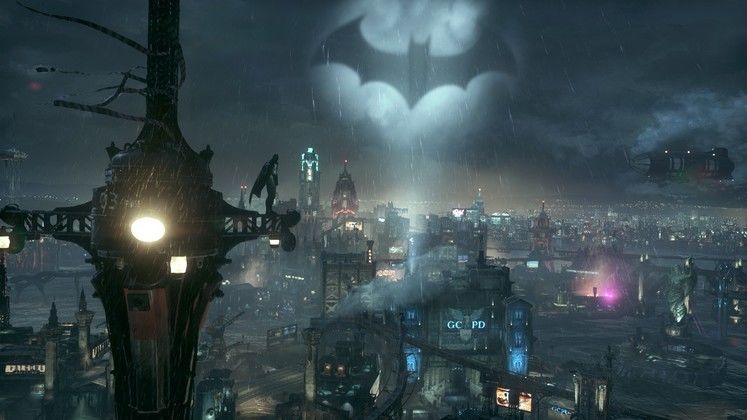 Anyone else hearing Danny Elfman kick in?

Of course the big new addition to gameplay is the iconic Batmobile, and it really is a love-it-or-hate-it job. I’m both. I love driving around Gotham’s streets, watching cowardly criminals scatter before my mighty wheels, chasing down ne’er-do-wells in their fancy rides, occasionally riding across rooftops, gorgeous stuff. What I don’t like is holding a button and transforming The Car into the Ultimate Shooty Bang Bang Death Machine, which is anti-Batman. It’s fairly entertaining, but apart from anything else the Batmobile shooting feels like it’s been imported from a Transformers game and doesn’t really fit the Arkham style.

Then we have the racetracks. Riddler’s back, and for god knows what reason he’s decided to build a load of really annoying racetracks in the sewers under the city. They’re challenging, but not really that fun. That really goes for all the Riddler stuff - three games in and while I’m impressed with the level of creativity in Rocksteady’s challenges the whole idea of Riddler Trophies has got a little boring now. I like the in-person appearances of the Riddler, with Batman trying to save Catwoman from a bomb strapped to her neck, but then Rocksteady give up with cleverness altogether and introduce the cheesiest most videogame-y boss fight in. I love Edward Nygma, but he drags down Arkham Knight. 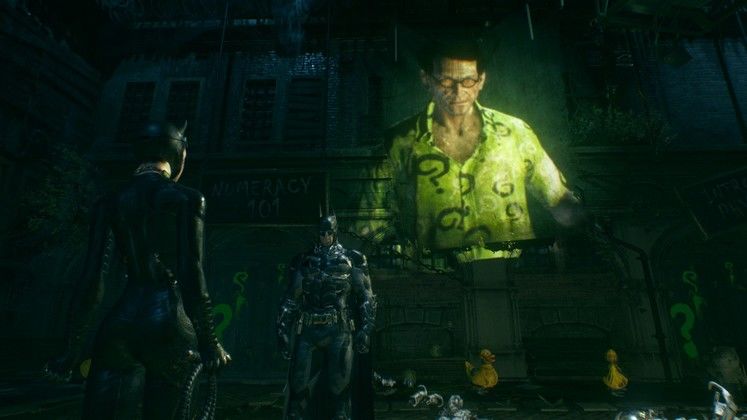 But on to what you really want to know: how it looks and how it now runs. My specs are an Intel i5-4670 CPU @ 3.40GHz (4 CPUs), 8Gb RAM, and an NVIDIA GeForce GTX 660 with 2Gb RAM. Before the Big Patch I could only play with all of the pathetic few settings turned to Low, and while Arkham Knight still looked pretty good many textures wouldn’t load and frankly Arkham City looked better. Now in the final release I’ve still got Textures on Low but that texture problem’s been sorted, and everything else is on High with even a couple of ultra-special Nvidia effects turned on. There’s even a lovely GPU Memory bar so you’ve got a good idea how the game will perform. If only this had all been in there from the start. Some folk are still having problems (let us know if you’re one of them) but I think we’re down to a minority rather than the majority. I think. I can only speak from personal experience, but please tell us if you’re still struggling - our readers will want to know.

[UPDATE: There are still a lot of people having trouble with the PC version, so I’m afraid it’s still absolutely “buyer beware” with Batman: Arkham Knight. It may work perfectly for you, at least to a satisfactory degree, or it may be utterly unplayable. Play at your own risk.]

Voice acting is generally great barring the phoned-in-gravelly Jonathan “Better Call Saul” Banks as Commissioner Gordon, but the music is sadly boring which is a shame as I liked the first two games’ soundtracks. Overall there’s a ton of content here, I’m currently sitting at 60 hours and I’ve only scratched New Game Plus, but I can’t finish up with talking about the additional Season Pass stuff that’s already out. I’ve played it all on console, from Batgirl: A Matter of Family to the additional racetracks, and… it’s not worth it. Batgirl is the biggest and that only lasts an hour, plus the entire area (a run-down amusement park) lacks the polish of the main game, probably because it was made by Arkham Origins developer WB Montreal. The rest is just half-hearted fluff, and it’s really disheartening to get Batman 1989 and Batman Begins skins for the Batmobile and not be able to use them properly in the main game. Oh, and I say “on console” because despite owning the Season Pass (pity me) the game just won’t download the DLC. Soon, right Warner Bros? Rocksteady? Hello?

Let’s cut to the chase: Batman: Arkham Knight is a great game, but it’s not as good as Rocksteady’s previous two titles. The story attempts interesting things but falls flat, particularly anything to do with the titular Arkham Knight. The gameplay is mostly utterly awesome in combat, stealth, and exploration, with Gotham City a wonderfully detailed and polished playground, and it’s a joy to explore. The Batmobile however makes things ridiculous, bringing a vehicle shooter into a game not built for it, and most of the optional side-missions feel forced in - why would Batman care about a few empty banks being robbed when a good chunk of America is in danger? Still, these missions are at least fun, with the exception of Riddler’s stuff which is either tired or annoying. Finally the PC version is at last at the state it should’ve been in June - stable, for the most part, at least as far as we can judge. Arkham Knight isn’t perfect, and it’s not messing with our Game of the Year awards after all, but it’s still a very enjoyable Batman game - and at the end of the day, as night falls, isn’t that the main thing?

That Fear Gas moment, which transforms the entire game and brings in a classic Batman character in the most unexpected (and fitting) way possible.