Bejeweled, the game that got Popcap Games started on the road to dominating the casual game universe. It was a twist on Columns, basically taking the game away from its Tetris roots and purifying the "match three" gameplay mechanic. Bejeweled Blitz was the Facebook offspring that took the normally placid, Zen-like activity into a sweaty, pulse-pounding blast that forced you to make as many matches as you could in a single minute.

This has proven to be a natural for Xbox Live Arcade and its robust online multiplayer as Bejeweled Blitz LIVE has arrived. This is the same game you've seen on Facebook, but with a ton of online game modes as well as a surprising co-op aspect that makes the game competitive across the entire Xbox Live Community.


The base game is basically unchanged: you move a single gem to create a match of at least three gems, which cause them to vanish. Building a row of four gems creates an explosive gem, while five creates a hypercube that will eliminate all of the same color gems you match it with. That's basic Bejeweled 2, but the Blitz part comes in the form that you have to constantly match gems as fast as you can. If you match gems fast enough, you maintain a string - when you falter, the string is broken. Creating special gem matches of 4 and 5 cause a multiplayer gem to appear, which will multiply the value of the gem matches. When 60 seconds are up, all unmatched special gems activate for bonus points, and the game ends.

If that weren't enough, there's a Bejeweled Twist varient included as well. Twist is Bejeweled, but instead of matching gems by swapping adjacent cubes, you rotate a group of four, and should you match a row of 5, instead of a hypercube you get a lightning cube that sends out lightning in four directions. (Matching 6 or more, which can only be done as part of a combo, results in a rare gem that shoots out three rows of lightning in each direction.) Unlike regular Twist, the Blitz version allows players to rotate in both directions, which is a gameplay balancing mechanic, given how fast the game is.

Since each game is a minute, you'll find yourself playing twenty or thirty games in a row without realizing it, trying to get that perfect game. Some players actually reset a game immediately if they don't like the initial board setup! This is something, however, that players cannot do in multiplayer.

What makes the game so special is that Popcap has included several styles of online gameplay. There's Blitz battle in which two players can face off, both online and offline, with two boards next to each other.

Then there's the party mode, in which sixteen players can all play at once online. While only the player's board can be seen, his competitors can be seen on a little track on the side of the board, showing where he ranks amongst his competitors. All the while, you're party chatting with your competitors, whether to give some smack talk or just talk about what's going on. The party mode can be a way for friends to hang out and chat all together, discussing their lives, all while they're playing 50 or 60 rounds of Bejeweled Blitz LIVE without even realizing they've wasted an hour or two.

All in all, Bejeweled Blitz LIVE is a great puzzle game on Live, and is one of the few games that is perfect for marathon online sessions, or just a quick five minute round to kill some time.

The game costs 800 MSP, and you can check out the official page here, which includes free video tutorials on how to get the best scores and quickly match gems. 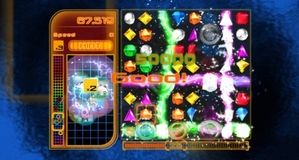