Blitzkrieg is the latest WWII strat game from German developers CDV. The game allows you to choose between, allied, German & Russian forces and the elements available to you in each campaign era accurately reflect those that were available.


Each campaign is divided in various theatres, and each theatre contains a selection of missions that you are required to undertake in order to complete it. Once these ‘main’ scenarios are completed, the theatre can be closed, however, you have the option to choose others that help you gain in experience & rank, allowing you access to advanced troops (only the best Generals get the latest technology). Once the theatre is closed, there is no going back & you then move on to the next.

Blitzkrieg is certainly not a C&C clone – there is no micromanagement involved which makes a refreshing change. Each mission you undertake has a series of predefined objectives & a suggested order of accomplishment. The actual way you undertake each scenario is down to you however – if you think that the main threat is from objective 4, then by all means concentrate on that first. You are given an initial force to undertake the scenario, although reinforcements may be available at other points. Good use needs to be made of you Air support units to keep your artillery etc free from observation & counterstrike by the enemy, whilst at the same time scouting out objectives with your reconnaissance units.

Support, resupply & transport also play a big part in Blitzkrieg. Your troops do not have an inexhaustible supply of ammunition and are not impervious to enemy fire, so effective use must be made of supply & repair trucks in the field. It’s also nice to see that the supply trucks also have to go back to the warehouse to resupply themselves so you get a good sense of the frustrations often involved while supporting frontline troops – watching a squad of infantry running out of ammo & getting annihilated is not nice.

As in all military affairs, good information is paramount and it is well worth taking the time to scout out your objectives. Your air recon units do the job admirably, but are prone to being shot down & are also at the mercy of the weather. If you lose all your allocated air recon units, you will not be able to spot anything from the air as other air types do not have the same abilities. This is where your scouts come in (if you have any that is). By setting them to crawl, they become virtually invisible to opposition forces and allow you to see deep into enemy held territory. Use of binoculars helps, giving a deeper, but narrower field of vision. Your scout is also supplied with a sniper rifle, allowing him to take out gun crews etc & therefore making your armour more effective. Using a scout as a spotter for artillery is very effective – you can ‘blanket’ a suspect area with artillery fire but, with a scout around, it is easy to pick out individual targets, minimise your troop loss & gain promotion just that bit quicker.

All of your troops gain experience as they battle & are carried over from mission to mission, which is another reason to take good care of them. Field promotions are announced ‘on screen’ and just clicking a unit shows the level of experience, so you can reserve your ‘elite’ units for the trickier missions whilst any other cannon fodder can be used carefully as well, the survivors of course gaining experience and becoming more effective. As you upgrade units (i.e. better armour models etc), the original crew moves to the new vehicle, maintaining their promotion level. As grouping follows the standard “ctrl n” method, it is easy to keep tabs on each group and use them effectively.

All the action is controlled from a top down view and it is here that a little more work would be appreciated. Unusually, there is no real camera control; you cannot zoom in or out or even rotate the camera, which can get to be somewhat frustrating. It is fairly easy to ‘lose’ a unit on screen as it becomes obscured by terrain features and can be a real pain trying to find it again. Whether this was intended in an attempt to deliver a touch more realism I do not know, but it seems very archaic not being able to pan or close in to the action. On the other hand, the graphics are crisp and clean. You can easily differentiate between individual types (which do indeed look like the originals, I particularly like the Matilda) and everything appears to move at the correct pace and even authentically. Moving a tank away from the action causes the tank to reverse until safe while covering the area with the turret. Artillery strikes are also nicely detailed, with the shell bursts looking & sounding just right. Overall, the sound balance is just about right and I’m sure that the different models of tank all sound different as well.

Multiplay gives you the options to play via LAN, internet or Gamespy and again these games make a refreshing change to the “build em quick & rush” stile so prevalent amongst o/l games nowadays. Tactics are vital here and ambushes abound.


Given the camera control frustration, I have to say that I really like this game. Most missions are carefully designed allowing a lot of tactical scope; the tutorial is excellent and the difficulty levels fairly accurately reflect the toughness of each level, whilst the amount of resouces available in the form of troops are never so many to allow for an all out rush attack. A seasoned player will complete the campaigns within a day or two, but the skirmish & multiplay certainly expand the game lifespan.

Given the camera control frustration, I have to say that I really like this game. Most missions are carefully designed allowing a lot of tactical scope; the tutorial is excellent and the difficulty levels fairly accurately reflect the toughness of each level, whilst the amount of resouces available in the form of troops are never so many to allow for an all out rush attack. A seasoned player will complete the campaigns within a day or two, but the skirmish & multiplay certainly expand the game lifespan.

Performing a well-constructed and well-executed assault on a fortified enemy-held town. 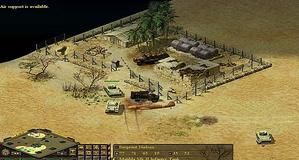