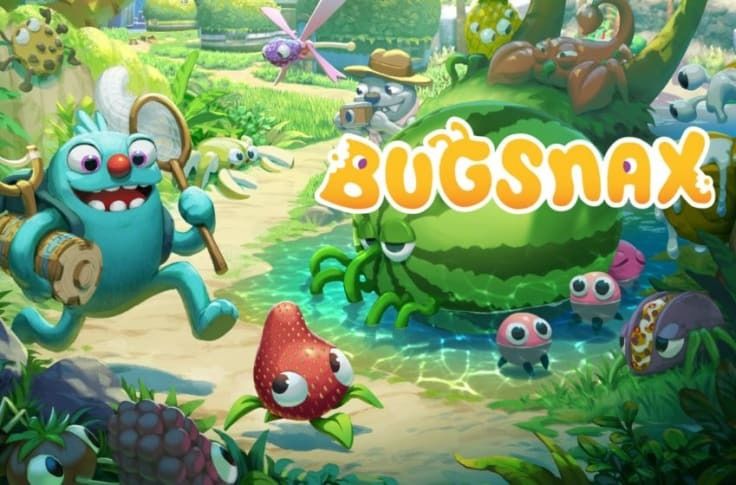 When we first saw her, Elizabert Megafig was introduced as a character resembling what would have happened if Steve Irwin was a furry walrus who hunted creatures that were half-bug and half-snack, also ate them, and had different parts of his body turned into food. This didn’t help much with the initial confusion around what Bugsnax was as a game, although it did make plenty of people wonder. Now, after spending time surrounded by food-shaped barely-creepy crawlies and somehow not getting banana hands, we’re somewhat confident that we’ve finally figured that one out.

In Bugsnax, you play as a journalist who arrives on Snaktooth Island after Elizabert herself invites you to document her journey charting its colorful and quite edible insects. An earthquake knocks you off your hot air balloon-powered boat, which is when you encounter the first member of Elizabert’s party – Filbo. After helping him regain his strength by feeding him some of the local fauna, you make your way to Snaxburg, the settlement where Elizabert’s expedition was based and which acts as a hub area for the rest of the game. It’s here where you find out that things aren’t in tip-top shape. Elizabert is gone and the Grumpuses that joined her – of which only some are actually grumpy – have left. It’s up to you to head out, convince them to return, and interview them to find out where their leader might be. 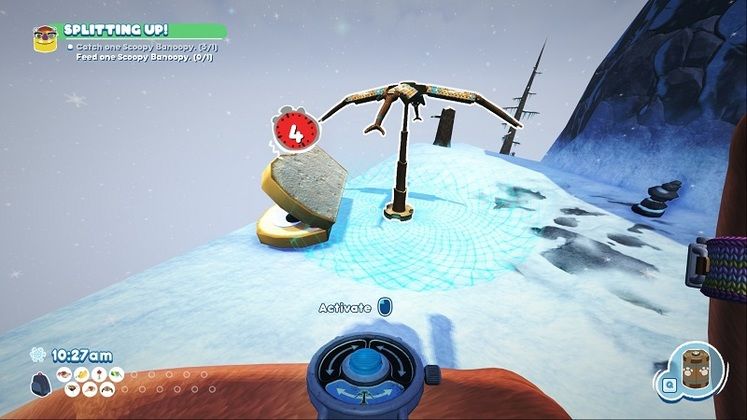 Spread across Snaktooth Island’s different biomes, the Grumpuses have one thing in common: most of their quests revolve around eating Bugsnax that you have to catch for them. That’s, in fact, what you’ll be doing for the greater part of the game. Early on, you get access to the SnaxScope that lets you scan targets in your surroundings to learn more about them. This tool becomes instrumental in your efforts, as some Bugsnax prove trickier to catch than others. You start with a simple trap that you have to trigger when the edible critters come near it, then quickly rush to pick it up before they escape.

Others might prove too quick and need to be tripped using the appropriately named Trip Shot tool or remain invulnerable until you make them tackle other Bugsnax. You also get a sling that can fire different types of sauces which act as lures, alongside a grappler to grab lazier targets from afar. But even then, hunting isn’t always as straightforward as selecting the right tool and clicking a button. Figuring out how to get our furry paws on the pesky buggers that could only be caught in midair took us a while, especially as we skipped a journal entry or two. You don’t always find high spots from which to drop a trap on top of them and hope that you’ll nail the timing. The game does let you use the Lunchpad to propel the trap in the air and, once it’s in range, nab the winged meals. 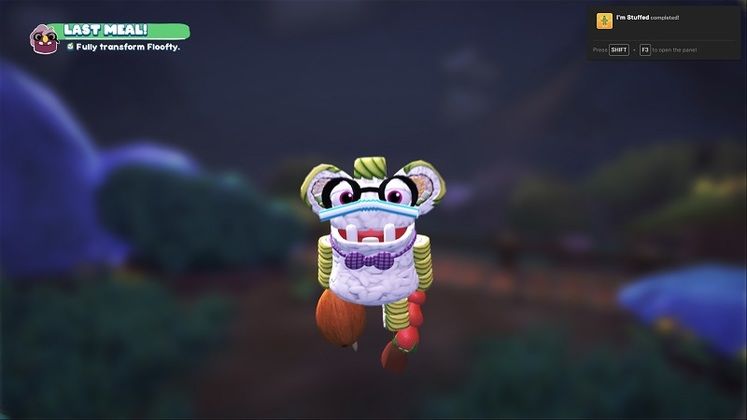 Early on, you also get a tamed Strabby that’s perpetually trapped in a glass ball. With the right dressing and knowledge of what particular Bugsnax love or hate, you can use it as a surprisingly efficient lure. Alternatively, you can also draw angry popsicles into firepits yourself. But whether you’re tricking hungry Bugsnax to eat each other so you can conveniently trap them both or drawing a Preying Picantis into the water to have it explode into several more vulnerable critters, these small puzzles don’t stay interesting for long. That’s largely due to how simple they are. Bugsnax encourages a little experimentation and isn’t lacking in variety per se. But even so, hunting its creatures isn’t necessarily challenging and quickly becomes repetitive, which ends up being a significant issue in a game that focuses on doing just that.

In a sense, Bugsnax can be seen as Pokémon but made out of food. They even say their name out loud when doing virtually anything. They come in a breadth of creative and fun designs, too. Each of Snaktooth Island’s biomes has its own fauna which really makes exploring them feel worthwhile, despite their small size. The Scorpenyo is a wall-scaling green pepper that lobs red peppers at everything in its near vicinity, setting it on fire. To you, however, that’s only a temporary setback, as you can’t really die and the game’s very forgiving when you fail.

Where the Ribblepede is an unassuming mixture of meaty ribs and caterpillar, the Flutterjam is a flying piece of bread-with-jam-on-it that falls flat to the floor as soon as it’s coated in butter. When you’re asked to catch a Scoopy Banoopy, you don’t really know what to expect. Getting charged and frozen by semi-sentient ice cream is an experience that tends to stick with you. It’s a shame that their different behaviors don’t spice up the gameplay loop of capturing them nearly enough. Some Bugsnax only appear at certain times of day, but the ease with which you can control the clock by sleeping doesn’t exactly make finding the few ones missing in each area a feat of any kind. 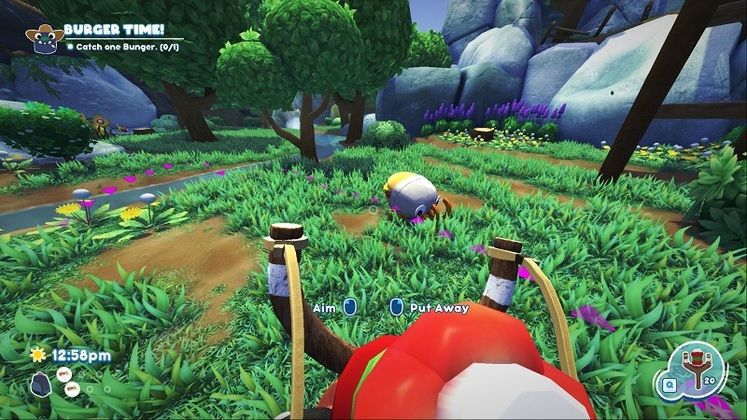 As you feed them to the Grumpuses, you not only help Elizabert’s pals in their personal pursuits but also morph different parts of their body. Things start off simply enough with a strawberry arm or a carrot-shaped leg, but the more Bugsnax you unlock and the further you progress, the closer you can get to turning the entirety of their bodies into food. We can tick off our lists being condescendingly spoken to by a creature made of sushi, strawberries and coconuts. We’ve also learned that having your nose turned into salami doesn’t make breathing much harder, although we’re only assuming that Grumpuses need to breathe in the first place.

But even once their bodies become food, the Grumpuses continue to be surprisingly loveable, even if you’re really meant to dislike a few of them. Although it does have comedic potential in its interactions, the game’s writing is varied enough to bestow a different personality upon each Grumpus and nail it with a relatively small amount of dialog, at least compared to other games. The voice acting too is consistently strong and there’s really no way to mistake one of Elizabert’s party for the other. It’s top-notch stuff. As you complete quests and run interviews, you learn more about the backstory of these characters, their exploits and secrets. One moment you’re tasked to turn someone’s feet into popsicles, the other you’re learning about their struggles and get a surprisingly vivid glimpse at what made them so unlikeable. 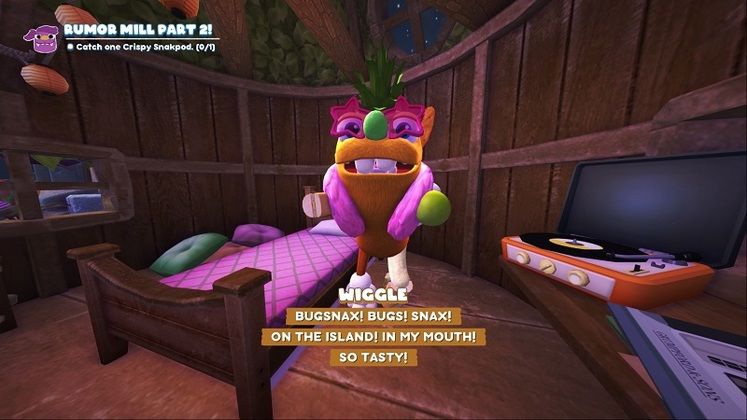 Filbo’s clumsiness is paired with enthusiasm, Beffica’s need to dig up dirt on everyone with a latent capacity for self-reflection; Elizabeth’s relationship with her partner, Eggabell, touches on a vastly different facet of self-doubt than Wambus the farmer’s inability to grow Bugsnax. As whimsical as it is on the surface, the game isn’t afraid of discussing its characters’ failures and does so excellently.

The Grumpuses each have their own quirks and flaws to which they’re sometimes oblivious or in which they completely sink themselves. Revealing them would mean spoiling what’s, perhaps, the best part of Bugsnax. There’s never an overbearing sense of drama, and the game doesn’t linger on what’s wrong with its characters too much. It also avoids cleanly wrapping everything up, focusing more on accepting one’s flaws rather than finding a permanent, happy solution for them. This approach makes them surprisingly more poignant and the characters – which you partly or entirely turn into food – unexpectedly human in their imperfection.

It’s a shame that the path to these revelations isn’t a particularly exciting one. Bugsnax’s gameplay does pick up somewhat in the final stretch, where it veers a bit more towards action. Having some of those elements on top of the existing traps and tools could have been just enough to make the time spent on Snaktooth Island more actively enjoyable. Sadly, hunting edible critters is far less remarkable than getting to know the Grumpuses.

Bugsnax is a feel-good adventure with a lovable cast, a rich variety of tasty prey to hunt, but thoroughly unremarkable gameplay.

Completing each character’s sidequests and seeing the personal conclusions that they reach. 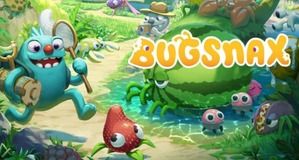