Right There's Another One, Don't You Frown, Chew the Meat and Hold it Down 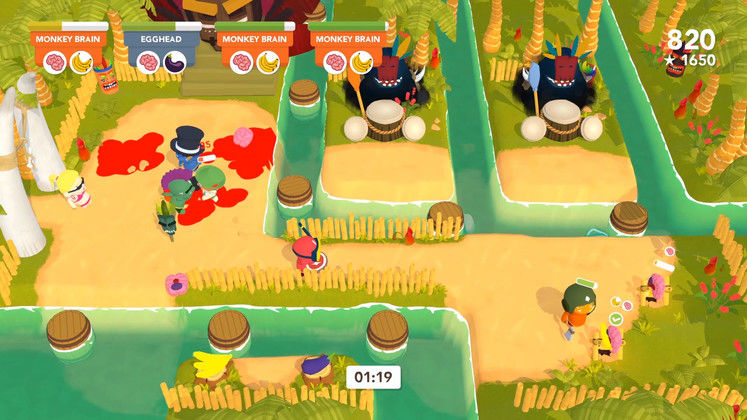 Cannibalism is one of those taboos you don’t think about often, but rears its head in bizarre ways. From Cannibal Holocaust to Alex Jones’s attention-seeking diatribe on eating his neighbors, it is the eptiome of brutality and desecration in modern society. Thus, it can be a bit weird to see it made into a wacky party game. That’s not itself a bad thing, however, and that will depend on the context surrounding it. If you’re wondering how such a pitch plays out, read on.

The Gods known as Hoochooboo have returned to the island, and they are demanding tribute. The local shaman is doing what he can to dispel the god, but it’s up to you (and maybe three friends) to fulfill his hunger to prevent greater catastrophe. It won’t be easy, but what food-based ritual is? The biggest issue with this story is straightforward, namely its use of the “savage cannibal” trope in the context of tribal cultures. 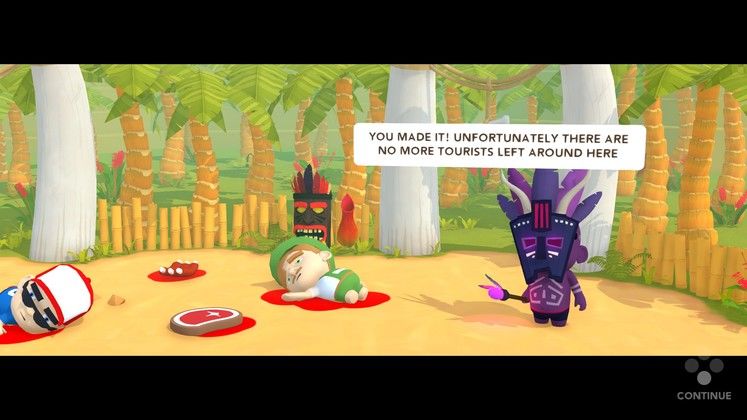 Dealing with it in 2020 is as uninteresting as it sounds. It tries to alleviate the racial issues by making the cannibal skin tones green and purple against the more realistic skin tones of the tourists you kill. But that’s akin to painting over the mould on your wall: it doesn’t solve the issue at hand. I’d like to stress that this isn’t just because of political correctness or sensitivity, it’s not my place to be offended on behalf of someone else. The problem is more about transgression itself. A game about cooking and eating human flesh should get a rise, whether positive or negative. Instead, it’s rather toothless. We’ve seen these stereotypes time and time again and it does nothing worthwhile with them.

Let’s pretend we can ignore the game’s conceptual baggage and focus on how it plays instead. Cannibal Cuisine falls into the “chaotic co-op” genre in the vein of titles like Overcooked and Moving Out. You’re given a certain amount of time to give the spirit as many meals as possible. It’s a mad dash against the clock, and you’ve got obstacles, tourists, and some very picky spirits. The way this is done is by picking fruits and vegetables to roast alongside the meat of tourists on the island. Hoochooboo won’t accept any type of food, and will desire certain skewer combos during a level. Each of them have a special name and will require you to juggle a bunch of food types. Cannibal Cuisine knows its gameplay loop and knows that it can get overwhelming at times. Luckily, players are able to start a level with a skill such as a quick sprint, fire breath to cook food faster, and a healing totem. However, the sprint one is the main one that matters if you’re playing alone thanks to its lack of a recharge time. 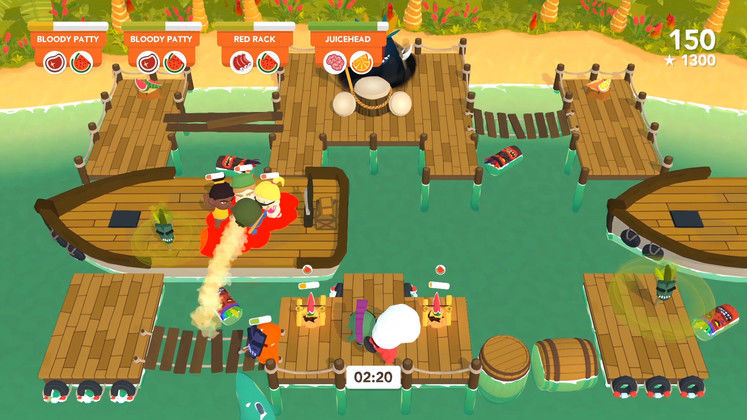 Obviously, a tourist won’t let you eat them and you’ll need to take them out. This is one of the bigger issues with the game, namely its single-button combat. You can do a three hit combo, but it never feels worth it. The third hit has such a long wind-up that it can be more efficient (and safer) to hit twice, run a bit, and hit someone again. Later levels also add more variety in the type of meat that drops from tourists, adding more of a random factor to food collecting. While it’s not pointless thanks to using raw meat to heal yourself, it can quickly turn frustrating.

It’s the type of chaos you’d expect from these sorts of games. But adding platformer elements is a mixed bag. While it does make your choices count, the looseness of the controls make it very easy to slip, especially on levels where you need to get on floating barrels. It doesn’t break the game, but it’s enough to make levels neither a blast nor a complete failure. That itself might be the greatest issue with Cannibal Cuisine. Even with its more transgressive concepts and its wacky gameplay, it never elevates past mediocrity. 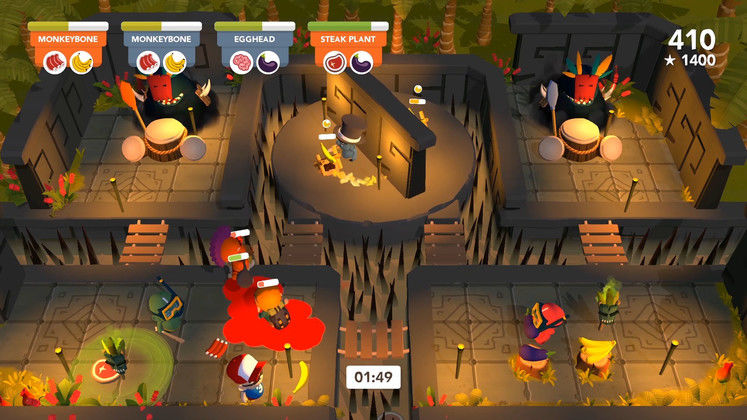 Cannibal Cuisine’s art style might be bright and colorful, but in a way that’s forgettable. It makes sense for the game, making it light-hearted over something more upsetting. It’s functional to boot, although the camera angle can make timing platform crossing a little weird. While it runs perfectly fine on my MSI FL63 8RC, it causes it to heat up in the same way as Skyrim does. While its design might have its flaws, Cannibal Cuisine runs smoothly enough if you’ve got the specs.

With a concept that’s insensitive at best, Cannibal Cuisine has a rough first impression to overcome. The mechanics that are under it are fine, but the controls can feel too slippery for their own good. Add that with an average combat system and you’ve got a game that never shines beyond its sensationalistic pitch. If your mates crave some co-op chaos, there are far worse games to play. However, there are also far better games out there.

The first temple level was a highlight design-wise 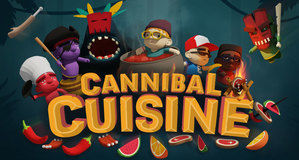