In January 2015 developer Blue Byte, creators of The Settlers and the Anno series, had a decision to make. The beta for their game The Settlers: Kingdoms of Anteria was not being well received, and the consensus was that although it had some neat ideas it just wasn’t a Settlers game. Blue Byte agreed, and instead of cancelling the entire franchise (see EA and Command & Conquer) they steered those ideas into a new IP: Champions of Anteria. It’s finally here and it’s a mix of Strategy and Action RPG that I’ll call a “Straction RPeGy”. But how good is it?

See the glorious AI and pathfinding at work in our video review!

I’m not going to pretend the plot of Champions of Anteria has any import. Returning home to the land of Anteria after many years of adventures, the three champions Anslem, Vargus and Nusala discover their peaceful homeland is in turmoil. Thanks to the exploits of an evil wizard called Kalen the tribes are all at war. It’s up to you guys and the other Champions you meet along the way to take it all back and defeat the wizard.

It’s fluff certainly, but it’s intentional fluff. The storytelling is very much in the Magicka or Discworld mold, a fantasy land where nothing is as serious as it appears to be. I like the humorous writing, but in all honesty it’s not as humorous as it thinks it is. Very few of the jokes actually work and besides the Hero Poses that the champions pull at the end of every mission there’s no visual accompaniment to this humour. Villagers go about their daily lives and monsters are straight monstrous, there aren’t even misunderstood trolls like in The Witcher. Which is a shame, since it might’ve livened up the enemy designs a bit. 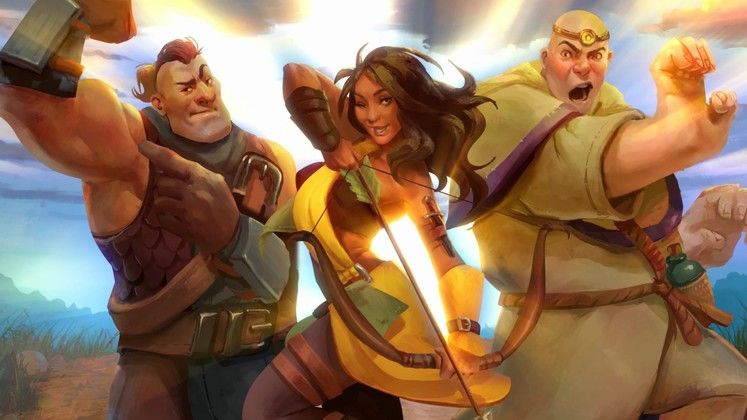 As mentioned the gameplay in Champions of Anteria is rather unique. There are two parts to it. A base building/upgrading/resource gathering part set on both a map of Anteria and an overhead view of your village, and missions that play like an action RPG. Nothing bad can really happen on the strategic map side so you’re free to play around until you fancy taking on a mission, which has to happen as there’s only a certain amount of things you can do per game day.

The village building side is probably my favourite of the two and in all honesty I wish there was a little bit more to do there before you have to tap out into a mission. Buildings fall into three categories: housing, resources, and stores. Housing is fairly standard and you need people to have any buildings. Stores are places where you can buy items for your Champions, like an Apothecary for potions and a Blacksmith for armour and weapons. Resource gathering is based on mining the Elements which I’ll get to shortly. 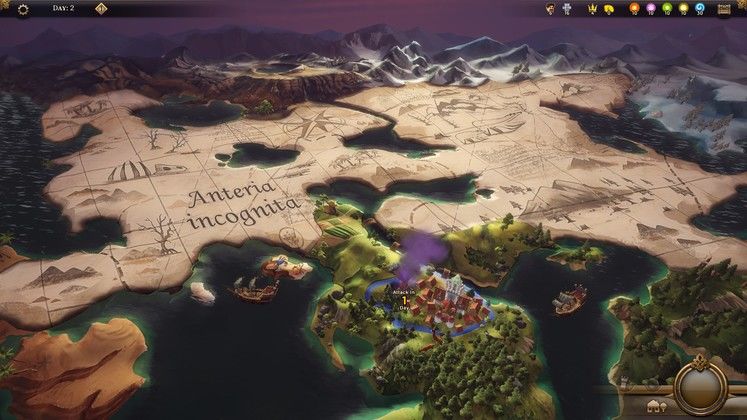 Oh, and this is Anteria. The map gets uncovered as you progress.

Renown and Gold received on adventures can be spent on items, making new buildings, or upgrading. Rather neatly when you upgrade your village you also upgrade your Champions too. You can buy access to new buildings, new items, new abilities, and when you do this an XP bar for your settlement fills up. As your settlement gains levels you can place Watchtowers to expand your domain and your Champions get more powerful. It all ties together rather well and is pretty neat, and this is especially because of the aforementioned Elements system Blue Byte have implemented.

Basically every action you take in Champions of Anteria is governed by five main elements: Fire, Metal, Water, Electricity, and Nature. Each interacts in a Rock Paper Scissors way, being strong against one element and weak against another, for example Fire is excellent against Metal but useless against Water. This idea may have been blatantly ripped off from Divinity: Original Sin but it’s such a good idea I’ll let it slide. With building it’s used particularly well, with areas that work better for certain elements – like a Water gathering building getting a production boost for being next to a river. Logical, but a Fire gatherer will be negatively affected if built next door. The village building seems simple at first but once these elements get brought into play it actually gets quite strategic. 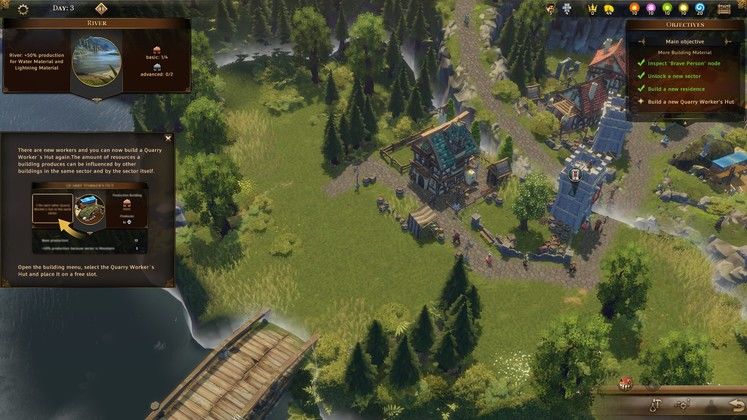 This here's a River area so gives bonuses to Water and Lightning producers.

Of course the Elements also affect the Action RPG side too. On the surface Champions of Anteria looks like a typical action RPG, with three characters you can switch between and a few special powers to use. You can pause the game at any time to issue orders but otherwise things don’t feel very strategic… except that each Champion and enemy is affiliated with a specific Element. Anslem is based around Lightning so he gets bonus attack power against Water enemies, but is helpless against Nature enemies.

It’s this strategic aspect that elevates Champions of Anteria’s action side to better heights. You really have to consider what Champions and gear to bring with you on a mission to counter the enemy Elements at play, and then pay attention to every battle to maximum your advantages and ease your disadvantages.

It’s all quite clever in theory, but sadly instead it’s in the basic features of Action RPGs that the game falls down. In short, it’s a pain in the ass and far too frustrating. Roughly 10% of the time you’ll click on a Champion and nothing will happen, usually in the middle of an intense fight, and sometimes for no reason a Special Attack just won’t activate. Characters can’t be revived and don’t regenerate health so the only way to recoup health is by stockpiling health potions – run out and you might as well quit the mission. Yes you can pause and issue commands, but the instant you unpause enemies will move and your choreographed assault will hit an empty spot, rendering careful tactics utterly pointless. Entire maps get repeated, in fact once I played the exact same map and mission twice back-to-back. 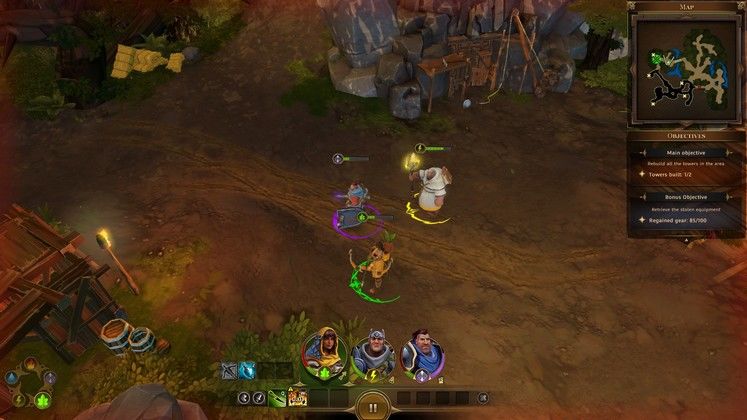 I think we've been here before.

Then we have my most hated aspect of the game: the AI. Enemy AI is just stupid, but Champion AI is, frankly, game-breaking. For starters, allies will not attack enemies for any reason other than you directly told them to do so. One of my Champions was getting slaughtered and half an inch away his two friends just stood there watching, the sick bastards. As mentioned Champions will aim Special Attacks at places rather than people, and they won’t think to compensate if either the enemy or they themselves move. I’ve ordered preemptive Special Attacks only to watch my character run straight past the enemies I told them to attack and fire at thin air.

And the worst part of all… the pathfinding. Both enemies and Champions will get lost in wide open areas and take the longest possible route to a destination, even if it means literally running around the entire map. I’ve clicked to attack someone and watched my Champion run the opposite direction towards another pack of far tougher enemies. At one point I lost Water Champion Oona during a big fight and she appeared a minute later with an entire army chasing her. It really is exceptionally terrible and it means half the strategy in Champions of Anteria is learning to keep your Champions on a very short leash like naughty dogs that won’t do what they’re told. 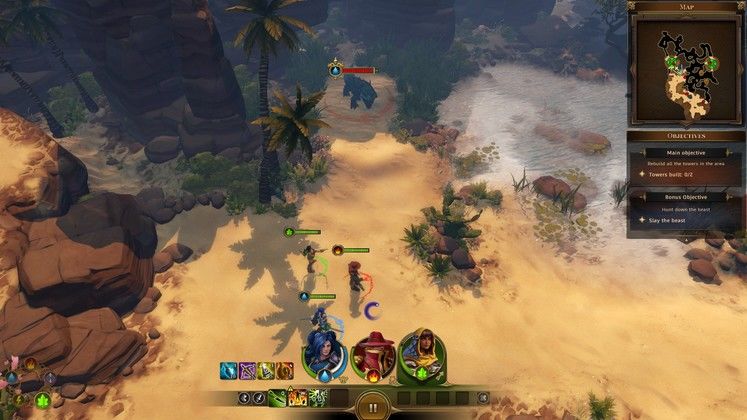 That crocodile looks lost too.

Champions of Anteria isn’t really that demanding a game, but it definitely has some inexplicable performance problems. No matter what settings I turned down I received regular slowdown and freezing during action-packed moments to the point where I began to wonder if the game had crashed. Furthermore I encountered plenty of bugs, including one amazingly frustrating glitch that stopped me from completing a mission. I had to escort a friendly spy to a safe spot, but the mission just wouldn’t end when I reached it and the mass of endless enemies I was fleeing from soon caught up to us. I had to reload about four times before I was allowed to finish. Oh, and I mentioned above how about 10% of the time the game wouldn’t acknowledge my mouse clicks when selecting a hero or activating a Special Attack or gadget. 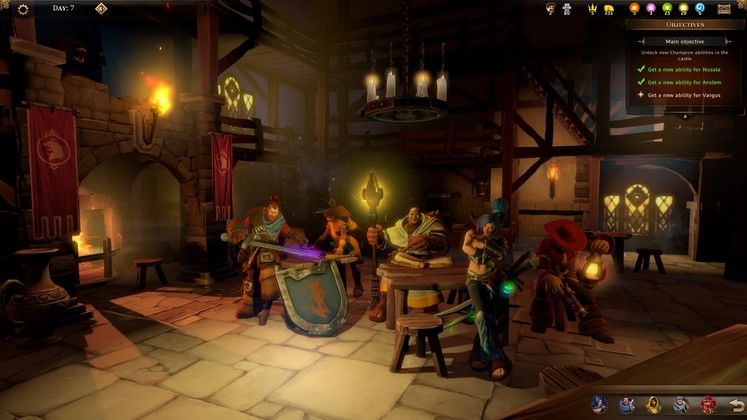 The audio is pretty good, all things considered. All the Champions have their own voices and their own distinct personalities, to the point where I was sad if I didn’t have cocky Fire Champion Baltasar in my party. The narrator is hammy as all hell and tries as best as he can to be a Discworld character but is only amusing 20% of the time. Acceptable though, and I don’t mind a game that doesn’t take itself too seriously. I just wish Champions of Anteria had gone even further with it like Magicka or Divinity: Original Sin and have funny quests too.

Rarely has a game run me through such a rollercoaster of emotions. I started Champions of Anteria thinking that the Elements system and other ideas were neat, then as the AI and pathfinding issues presented themselves I hated it to the point of giving up this review, before finally accepting the game’s many problems and finding myself generally enjoying it. Generally.

It’s actually a little bit addictive, especially as missions (when they work right) don’t run on too long, but there are far, far better examples out there of Action RPGs and village builders even if I can’t think of any that combine the two. The Settlement side is neat and a nice diversion but there’s not enough to do there, while the meat of the game is dedicated to a lacklustre Action RPG with strategic elements that don’t work very well. It’s quite an easy game to lose yourself in once you’ve accepted its failings since there are few games out there like it, but it’s even easier to just play Torchlight 2 or The Settlers 7 instead. 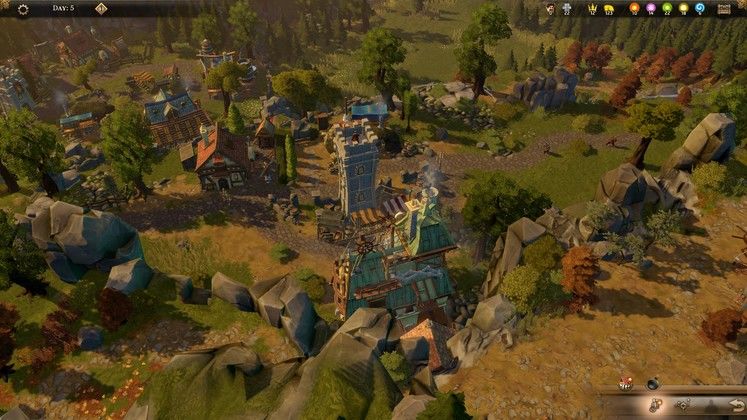 Definitely not The Settlers.

Champions of Anteria has some undeniably neat ideas, and I’ll always be more accepting of a game that fails trying something new. The combination of Action RPG and Village Building works well, and the Elements system may be pinched from Divinity: Original Sin but adds a deep strategic slant to both Action and Building and makes both sides far more compelling. Unfortunately while the Building side is simple but fun the Action side is deeply flawed. The controls aren’t precise and sometimes your orders just won’t be received, plus the reliance on health potions makes the whole thing boring. It’s the atrocious AI that stakes the Action side in the heart though, with Special Attacks hitting thin air, allies that refuse to attack unless you directly order them, and pathfinding that will literally have both allies and enemies run around the entire map to get to a point an inch away – and not caring what dangers they’ll inevitably run into. Furthermore bugs and performance issues were extremely troublesome.

Champions of Anteria can be a really addictive and occasionally fun game with nice ideas and a neat sense of humour, but as a Straction RPeGy it’s just got far too many flaws to recommend.

The Hero Poses at the end of a mission. 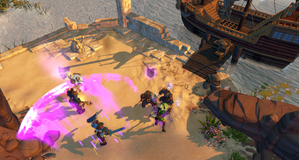 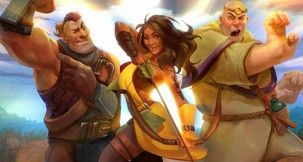