Company of Heroes 2: The British Forces

The British are coming, and they're packing 17-pounder guns, glider commandos and a lovely flask of hot tea

I was always a British player in the original Company of Heroes. I’ve got the reactions of a drunk sloth, so I’ve never been good with at the fast, reactive style of warfare that the German factions specialise in, and controlling multiple squads of American infantry, each with their own special weapons and abilities, always felt a bit too fiddly. No, I was happy with a more straightforward doctrine – grab some territory, pack it to the brim with machine guns, bunkers and anti-tank guns, and hold onto it for dear life while the enemy throws tanks, artillery shells and whatever else they have in the cupboard at you.

Company of Heroes 2 - The British Forces

The British are coming, and they're packing 17-pounder guns, glider commandos and a lovely flask of hot tea.

It’s an approach that’s viable once again with the addition of the British army in Relic’s latest expansion for Company of Heroes 2. British troops still lack the adaptability of the Wermacht and American infantry, and their tanks still can’t take as much punishment as the elite German vehicles. Neither can they field swarms of unfortunate conscripts like the Russians can. Where they do excel, however, is in defensive fortification; 17-pounder guns make mincemeat out of enemy armoured formations, while royal engineers can set up rugged mortar and anti-tank emplacements that can be a nightmare to push through. 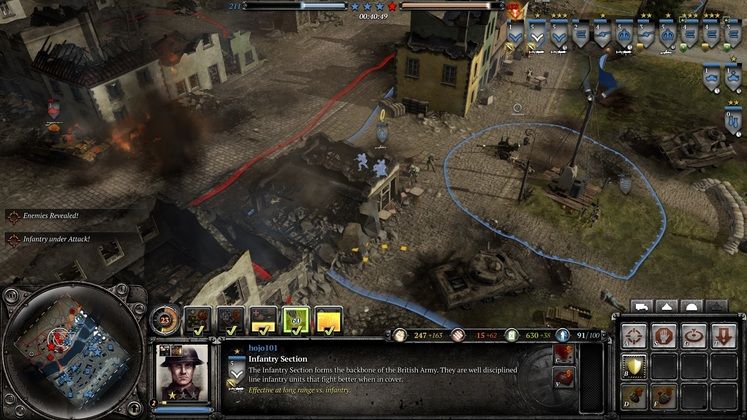 British infantry are rugged and difficult to rout once they're dug in, but lack the versatility of Russian, American and German troops.

If, like me, you’re a journeyman COH2 player, that’s probably how you should play the British – as stubborn, unyielding turtling specialists. Try to engage more mobile and vehicle-heavy armies and you’ll find yourself outmanoeuvred and often outgunned. It’s best to push forward slowly, keep your supply lines secure, and double down on MG nests and anti-tank guns to put down a withering field of fire. And as soon as the enemy gets bogged down? A few dozen artillery shells are an excellent remedy for any cases of ill-advised bravery among the enemy force.

That’s not to say the British don’t pack a few more nimble toys. The universal carrier is a nifty little tracked vehicle that can perform a number of fast-response actions across the map. Its vanilla version has room for an infantry squad, and its high speed means you can shuttle units to contested areas in double-quick time. Or you could opt for a mounted Bren gun or flamethrower, which offer a deadly anti-infantry option. By the mid-to-late game universal carriers begin to lose their effectiveness; held together by paper and string as they are, anything more violent than a light gust of wind will see them collapse like a wet cardboard box. Still, during the early scouting stages they’re a tonne of fun to use. 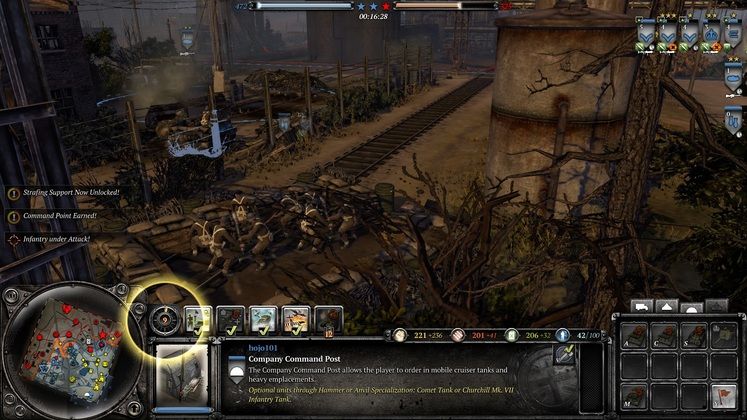 Relic still does explosions better than anyone else, and with a 17-pounder gun on the field you'll be seeing a lot of them.

Other units include versatile commandos who can wreak havoc behind enemy lines, a surprisingly deadly Comet heavy tank, and the familiar and dependable infantry section, unflashy front-line infantry who can grab Bren guns and Piat launchers for a little added versatility It’s a nice solid line-up, with a handful of entirely new units that players won’t have seen before.

In fact, although they do still skew towards a defensive approach, Relic’s made sure this new model British army is a lot more flexible than the one that appeared in the original Company of Heroes. At a couple of stages during a game, you’ll be given an option that will slightly shift the focus of your military development. The first is a seemingly minor choice between the ability to produce rugged AEC armoured cars and a BOFORS AA emplacement that’s also an effective anti-infantry counter. It’s a subtle hint that the British do in fact possess the tools for a more aggressive, mobile style of war.

The choice becomes more explicit in the late-game, when you’re asked to choose between the ‘Hammer and the Anvil’. Essentially, these are two doctrines that offer new abilities units and upgrades, focused respectively on aggressive use of medium cruiser tanks and infantry to push forward into enemy territory, or alternatively securing what territory you own , and packing it with nasty defensive fortifications.

The choice you make won’t entirely change the way the British play – you’ll still have access to plenty of defensive tools if you opt for the Hammer focus, and you’ll never approach the sheer speed and ferocity of a specialised German armoured division – but it does mean that the army feels far less like a one-trick pony that it has previously. I had a couple of games against the infantry-focused Soviet and American armies (eschewing historical accuracy for a moment) where a combination of glider commandos and well-rounded Churchill tanks allowed me to push aggressively into key point-scoring locations, buying me enough time to shore up my supply lines and draining valuable resources from the enemy. 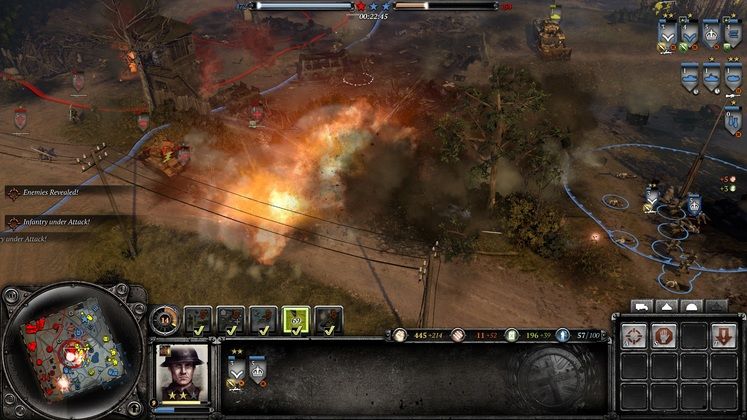 This is where the British excel – dug in tight, suppressing the enemy with MG and field gun fire, and mopping them up with artillery and armour.

Speaking of new maps, The British Forces adds a handful of largely urban-focused levels, ranging from cluttered one versus one skirmishes in abandoned German and Dutch towns, to large-scale arenas designed for six to eight player battles. I appreciate the new focus on the latter stages of the war, when the Allies were pushing through the shattered industrial remnants of Germany. These cramped urban settings are perfect for laying out the overlapping defences that the British specialise in. If the enemy commander fails to properly support his tanks with scouting infantry, you can reap a horrible toll on his armour with a smartly positioned field gun.

Company of Heroes 2 continues to develop nicely with The British Forces, which adds a fun new army that plays very differently to any other faction in the game. If you’re a greenhorn like me, you’ll probably opt to make the most of that British defensive expertise by settling down in a nice solid defensive position and weathering waves of enemy attacks, but Relic has provided plenty of variety for those who prefer a more direct approach. By offering players a choice between the Hammer and the Anvil, Relic has prevented the British army from feeling like a retread of the formula established in the original game. An excellent addition.

When you set up your 17-pounder emplacement in a contested zone, and watch advancing enemy tanks pop like overripe melons.