The Other Mandate of Heaven 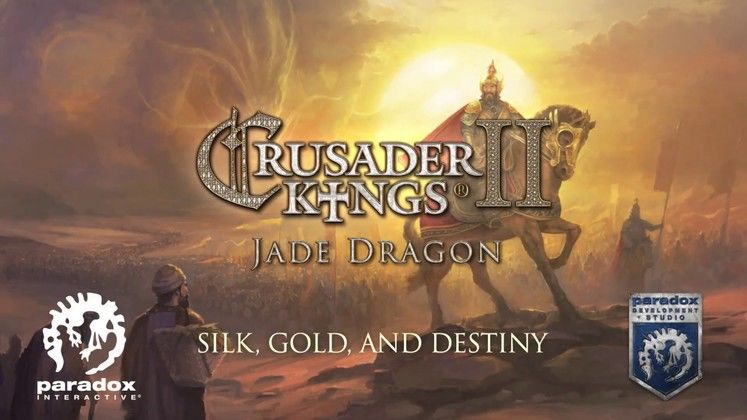 Crusader Kings 2’s latest expansion seemed initially to be a fantastic, major content pack fleshing out the far east in a game which hasn’t travelled beyond India, but the first red flag flew when it was revealed that this DLC doesn’t, in fact, add China as a playable nation, or to the map for that matter, at all. As much as Paradox nailed Cradle of Civilization for their other global dominance simulator, Europa Universalis IV, they dropped the ball with Jade Dragon just as much.

Like all region-focused expansions, Jade Dragon also takes aim at a particular country or area with its features, and this time the great Chinese dynasties were chosen. However, as said above, we can’t actually play as any Chinese dynasties. Rather, whichever dynasty reigns at the given moment can have an effect on the world at large. They exist as players on the side-line, never present but pushing pieces on the grand board nonetheless. 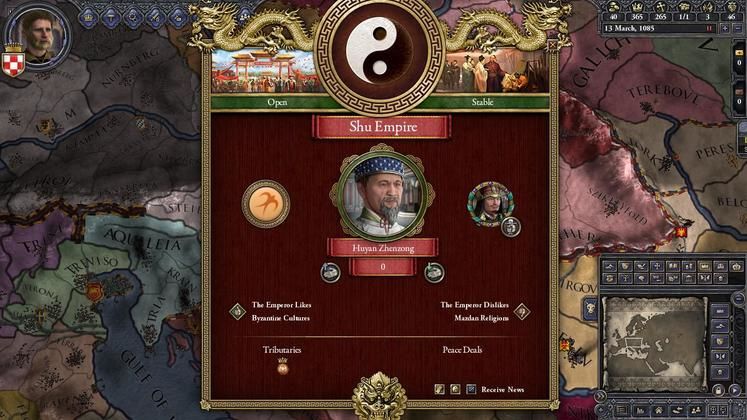 In Jade Dragon, the vast Chinese Empire amounts to the face of some old dude.

In practice, the actual ‘content’ of Jade Dragon amounts to a small menu screen which can be accessed from a tab next to the minimap. This menu will show you the current emperor, their heir, what the emperor approves and disapproves of and a few interaction options. Many of them directly affect you, like requesting special artisans or artefacts, with few options directly affecting other nations. You can request invasions, significantly weakening your enemies, or peace deals to get you out of wars you can’t win or can’t afford.

These favours all cost grace, a new resource similar to prestige that is exclusive to the Chinese interactions. Grace can be earned by sending the emperor tributes, in the form of eunuchs, concubines, artefacts and gifts, however these have higher costs than similar regular actions that can be taken with other characters, putting it out of reach in the early years unless you pick a particularly powerful starting character. 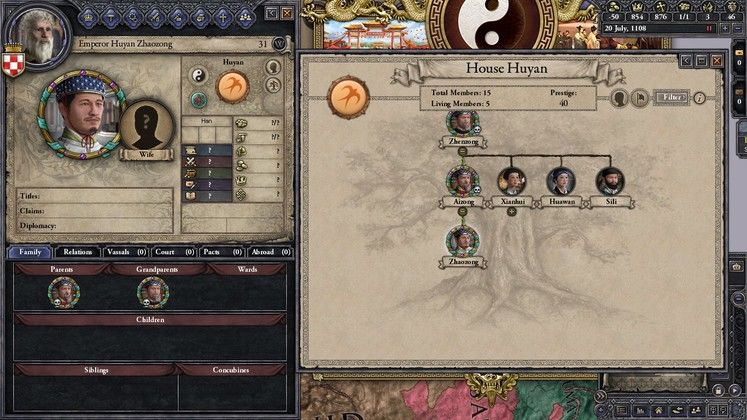 Family tree of the current dynasty

Another interaction with China that is available is becoming a tributary – basically being part of the empire’s protectorate, similar to being their vassal. Being a tributary has both benefits and disadvantages, the latter primarily being taxation, but opens up the opportunity to benefit from some of the internal strife of China. While it adds some interesting scenarios into the mix, it’s more of a mid/late game feature, and being physically close to China helps too.

Cosmetic additions brought with them new unit models for Chinese troops, who either appear as invasion forces or Chinese mercenaries who can be hired through the military tab. Additionally, several character portraits have been updated to better reflect the real people behind these names, and the Chinese portraits offer a higher degree of accuracy than some of the legacy portraits in the game. 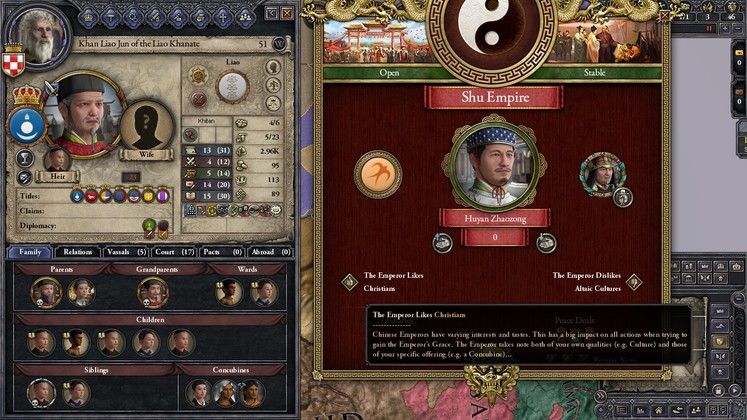 The current emperor like Christians, which doesn't bode well for his Buddhist neighbours

At the end of the day, there is not much that Jade Dragon does. In essence, you can get buffs and get an NPC nation to attack your enemies provided you’ve invested enough into earning the required grace. The diplomacy of China with other nations has little impact in the grand scheme of things, and ultimately it doesn’t feel like going through the emperor is the best route to getting these bonuses.

Jade Dragon adds precious little to Crusader Kings 2, which would have benefitted much more from a playable and visible Chinese region. This expansion feels far too feature-bare for its price tag, and even at a smaller price point none of it feels really impactful. Even when you have access to the China menu, you’ll likely find yourself progressing via other means.

Requesting an invasion against an enemy can be quite entertaining, especially when they aren’t suspecting. When a marginally more powerful enemy neglected to consider that I’ve got significant grace with the emperor declared war and was slowly overpowering my forces, a swift imperial invasion rained down upon them like a righteous “nope”. 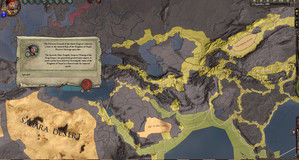