Walk soft and pack a big stick, but never walk away 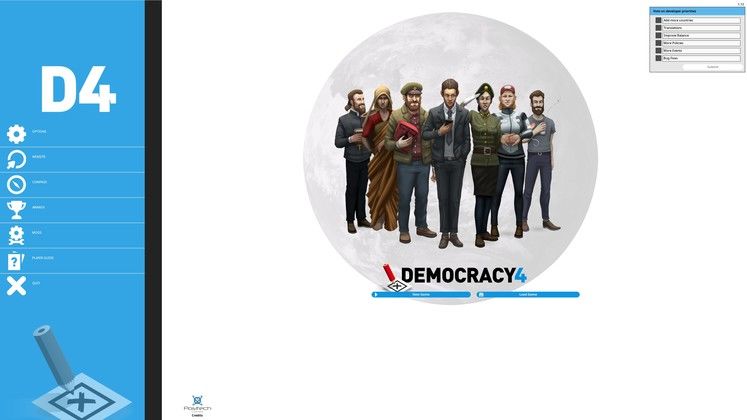 Ah, democracy. A highly overrated yet utterly indispensable part of life. Back in 2005, British studio Positech Games decided to use that term as the title of a strategy game. Now, 15 years later, the fourth – and so far, best – entry in the franchise has arrived.

I first heard of the series by playing Democracy 3, back in 2013. One of my best friends has an uncanny talent for politics, and he introduced me to the series due to my intense liking of strategy games. Unlike the rest of the genre, Democracy is much less about direct control and much more about string pulling – through policies, decisions, and votes, you struggle to keep a government and society functioning and try to not get booted out of office next time an election comes around. 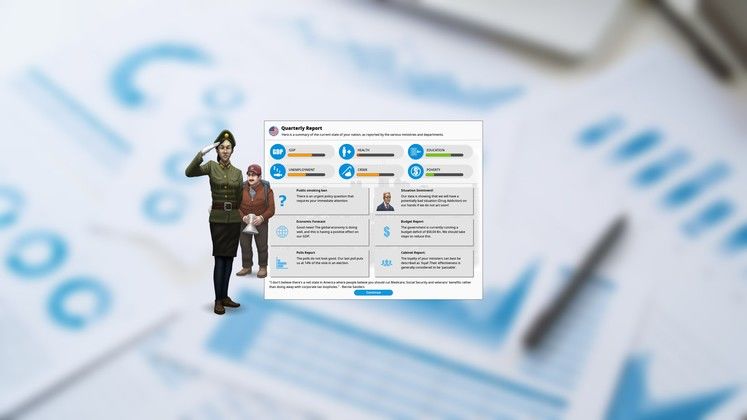 Democracy 4 continues that trend, maintaining all the unique selling points of its predecessor while taking some systems from the Democracy 3: Africa standalone expansion and updating the overall content to fit more modern times. As anyone with a passing interest in politics knows, a lot has happened in the past couple of years – let alone half a decade – so the new game had to include not only the concept of “fake news”, but also drones, electioneering, extremism, and even social engineering.

The core of the game takes place in turns, as you use your political power to affect policies and generate effects across society. Democracy games are by nature remarkably complex, featuring hundreds of topics such as traffic, tax, and children support encompassing virtually every facet of society, as well as tracking individual voter groups and demographics, be they economic (wealthy, poor, etc), racial (minorities, immigrants, etc), political (capitalist, liberal, etc) or even age groups (retired, millennials, etc). 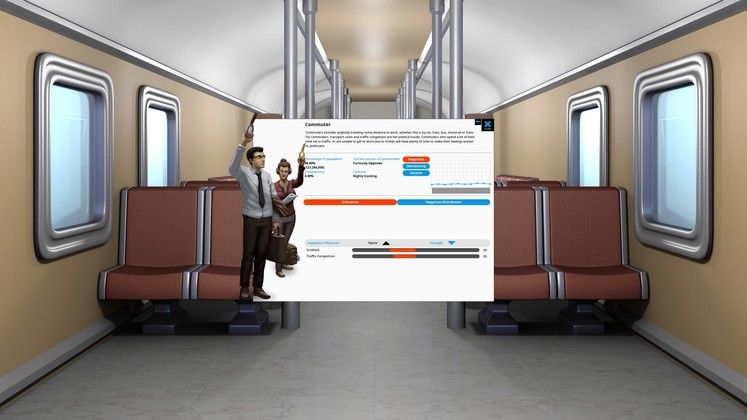 The end result is an immense mix-match of factors to take and a huge chain-reaction of effects for every decision you make. Your cabinet and ministers also have specific sympathies towards certain demographics, further affecting the layout of the sociopolitical situation and the amount of power you can bring to bear when changing policies to address problems or enact changes.

Luckily, all that complexity is easy to manage thanks to Democracy 4’s very visual UI. Good things are coloured green and bad things are coloured bad, allowing you tell at a glance what’s an issue and what’s a boon. Hover over any icon, demographic, or minister, and you get a nice series of colour-coded moving lines connecting every relevant factor to each other, with the speed of the arrows indicating the intensity of the connection and how much the situations are affecting each other. 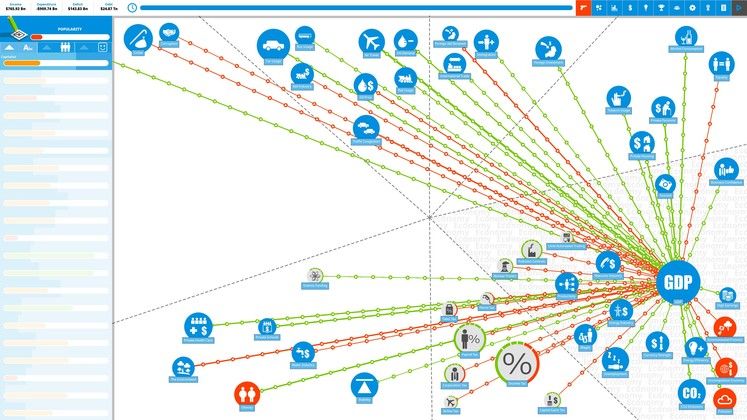 Besides that, there are a lot of menus and graphics everywhere allowing you to chart and plot the happenings of voter intention, policy shifts, and political milestones. The game is very data-based, and as a result it gives you all the tools to monitor that data both before, during, and after making your decisions.

One thing I find really interesting is how well Democracy 4 captures that current zeitgeist of the world. You start the game by choosing either the UK, the US, Canada, France, or Germany to govern (with Australia and Italy apparently coming after launch), and each country is packed full of different stats, policies, and issues that reflect their current climate. The US has a lot of healthcare and racism issues and the UK is currently being destroyed by an inept conservative government, for example, and even the amount of political support you start the game with roughly reflects the current voter split. 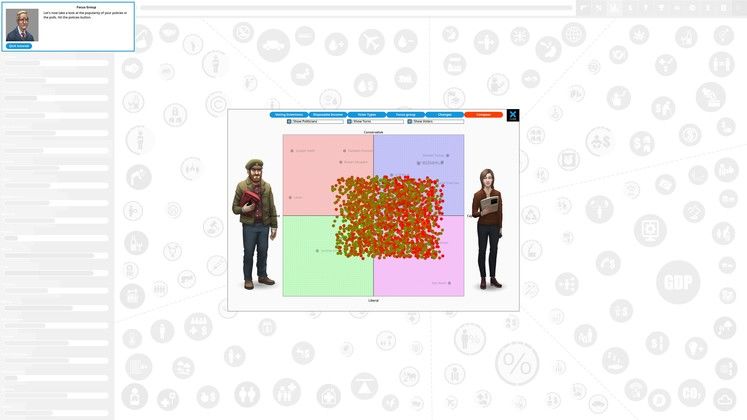 Due to that, Democracy 4 can be a bit of a weird game as its a product of its time. It will most likely not remain relevant in a few years when the political scenario changes once again, requiring you to buy Democracy 5, but at the moment, it does a great job of capturing the flustercuck that is Earth by 2020. Simulated corruption, crackdowns on political freedoms and free speech, and even authoritarianism are here, and it’s up to you as the person in charge to fix those countries in a way their real life leaders cannot.

On the technical side, the game ran mostly without issues. It has very little impact on GPUs, meaning even low-end computers could arguably get a good performance as long as their CPUs are up to snuff. The big issues I did have are a bit on the “first world problems” side of the scale, as the game sorely lacks a resolution scale slider that makes playing it in 4K a chore, since windows and texts don’t scale and the end result is a lot of dead space with very little words in it. I tried reducing the game to 3K and 2K, but that just caused all the menus to break and display their strings, which left me stuck between 1080p in window mode or full screen 4K during the review, which was less than ideal. 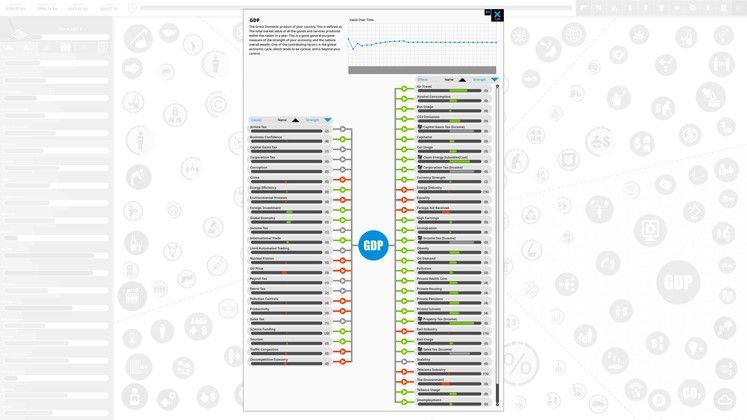 In the end, however, those are minor blemishes that can surely be patched after launch. Democracy 4 is the unique kind of game that targets a strategy niche, giving players control of governments in a more authentic way than the Civilizations out there do. This is the franchise’s strength, but also its weakness – not every kind of player will have the patience and the mindset to parse through that much data and play the slow game to get policies across. Still, that is hardly the game’s fault, so if you are a fan of political strategy or just politics in general, you should definitely give Democracy 4 a very fair shot.

A very capable sociopolitical simulator that should please anyone looking for a different kind of strategy game.

Finally getting the UK back on track and out of this Brexit stupidity. 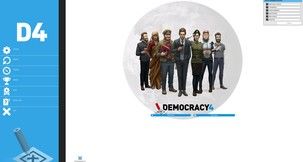