Hail hail Deponia, a land we didn’t make up!

Well well well, welcome back Daedalic Entertainment. These guys made The Whispered World, a pretty-looking old-school adventure that I will always remember as the only game ever that I felt forced to stop playing due to the downright painful voice acting of the main character. A 40-year-old man trying to do the voice of a child is more hideous than nails down a chalkboard. Daedalic’s new game is called Deponia, and let’s be honest in the very first paragraph – it’s not going to fare much better.

Before I begin the character assassination, a brief note on what the heck Deponia’s about. Lead character Rufus is an utter loser (ah, one of those) who dreams of escaping to the paradise of the skies, Elysium. You see, the planet is split into two areas – the people of Elysium live high above the ground and have all the working technology, whereas the ground-dwelling people of Deponia eke out their living surrounding by broken trash and where clean water is more valuable than oil. Rufus’ latest attempt to get onboard an Elysian monorail accidentally brings down an important (and beautiful) woman called Goal, who Rufus tries to help get home and away from the prying eyes of the Elysian police force (the Organon) who want her for some reason.


None of this is a bad idea for an adventure game, despite sounding similar to both Wall-E (trash-covered world) and, I believe I’m about to show some major geekery here, DC Comics’ planet of New Genesis (with the higher people living in the clouds and the “lesser people” on the ground). Rufus getting accidentally involved with a sinister plot all because he wants to save this girl is a fairly straightforward idea in a pretty interesting world, so all it would take is some good writing and well-designed puzzles and we could have a good adventure game on our hands. Oh dear.

It’ll take a while to describe the myriad of ways in which Daedalic misses their targets but I’ll do my best, starting with Rufus. It’s clear that Daedalic intended the guy to be one of those Guybrush Threepwood/Charlie Brown “perennial loser” archetypes, with a dash of Han Solo/Mal Reynolds “out for himself but a sucker for a girl” rogue mixed in. The trouble is that they’ve ended up with a thoroughly unlikeable character who you don’t want to see succeed, much less play. Rufus has no redeeming features whatsoever, is rude, sarcastic, causes misery wherever he goes, and utterly fails to be endearing. Unlike Guybrush Threepwood he never sticks his neck out for anyone else, all the people around him are better human beings than him, and most importantly from a gaming standpoint he is not funny.

As a game designed to be humorous Deponia should be expected to make the player laugh now and again. Over the entire thing I merely cracked a smile once (by looking at an unconscious parrot in Rufus’ inventory). It can’t even be blamed on a bad translation either since the visual comedy sequences, such as an early video showing Rufus getting hurt in a variety of ways, are just as unfunny. That particular sequence plays out like a Looney Tunes episode, but is utterly lacking in either imagination or timing. Much like the rest of the game… oh yes, even the timing.


Not just comedy timing, but pacing as well. The plot moves glacially, and seems to be held up by puzzles that fail to complement it. In a good adventure game these should come naturally out of the plot, whereas here it often feels like the puzzles have been thought up at the last minute just for the sake of having them. This is the only explanation I have for the fact that a quarter of the game is finding a strong cup of coffee, and another quarter is getting an elevator to work after you’ve already evaded the Organon and got Goal to safety - there is literally no other objective apart from “have a look upstairs”, which is turned into an epic quest.

I’m not joking about the coffee thing either. It takes several hours spent wandering around the whole of Rufus’ home town of Kuvaq and involves such delights as using a balloon and a hook (stolen from his ex-girlfriend Toni’s shop after he annoys her by trying to pick up an item so she has to meditate, of course) passed through a tiny furnace to lift up a chimney cover (described as “sealed”) in order to fill your best friend Wenzel’s house with sewage. What does that accomplish? Wenzel finds fresh water amidst the sewage and becomes rich, so you can now see the mayor. WHAT?! Seriously Daedalic, how was I supposed to work any of that out?! Especially as Wenzel already said he didn’t want to see the mayor and would’ve given Rufus his ticket to see him if we had asked!

Games like Deponia are the reason adventure games are considered dead. The puzzles often make no sense even when you’ve stumbled through them, and you regularly have to fly completely blind as very few of the things you’re “solving” have an obvious objective. Yes of course I should know to put the dead man’s leg behind me to meditate better, or that electronic bull’s blood makes a good revitalizing tonic. There are occasional dialogue hints (that last one I got from Wenzel, lucky I talked to him as I had no reason to) but nudges towards puzzle solutions or what you should be doing? Not a chance, use the internet and welcome back to the ‘90s. One time I got stuck for half an hour in a single room with all of two items to use and one thing to use them on – use the sock on the mechanical arm’s hatch, of course.

There are two nice things I can say about Deponia. Firstly, the art is really nice. Daedalic have a habit of making bright hand-drawn backgrounds with plenty of detail and lots of moving parts, and while the brown trash planet thing gets a little repetitive after a while the cartoony style keeps it all interesting. It’s also why adventure game fans might opt for this instead of the pixel-based Resonance, which would just be plain wrong.


Secondly, there is one type of adventure game fan that will enjoy Deponia and that’s the type that loves to solve tricky old-school puzzles without the temptation of hints. That fan will be kept happy for days, but anyone who values interesting plots, likeable characters (yes, all the others are annoying too), well-written dialogue, humour that is actually funny, or puzzles that both tie into the story and that you can actually see the point of will find less of interest in Deponia.

Deponia’s saved from being worse than Yesterday by at least having a simple understandable storyline and by not taking itself too seriously, but that’s not saying much. Next time though Daedalic, hire yourselves some better writers (in both German and English), try not to make your main character so utterly hateful, and make your puzzles have some recognisable objective or logic to them. Alternatively, just stop creating adventure games that make me drop to my knees and beg for them to end. That’ll be good too. Incidentally, it’s the only game ever to have me pissed off at a toothbrush. Well done guys.

The stunned parrot in the inventory moment was pretty funny, although I don’t get why laughing gas would knock him out.

Deponia’s saved from being worse than Yesterday by at least having a simple understandable storyline and by not taking itself too seriously, but that’s not saying much. Next time though Daedalic, hire yourselves some better writers (in both German and English), try not to make your main character so utterly hateful, and make your puzzles have some recognisable objective or logic to them. Alternatively, just stop creating adventure games that make me drop to my knees and beg for them to end. That’ll be good too. Incidentally, it’s the only game ever to have me pissed off at a toothbrush. Well done guys.

The stunned parrot in the inventory moment was pretty funny, although I don’t get why laughing gas would knock him out. 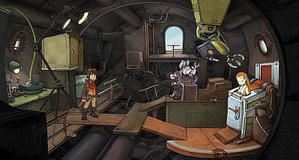 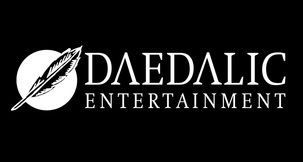