One Furon against humanity 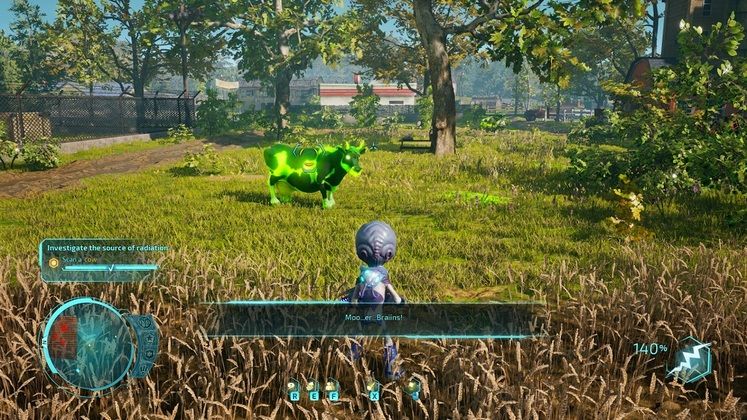 You know your alien invasion is off to a bad start when your UFO gets accidentally shot down during a missile test. Thankfully for the Furons, they’re quite good at cloning themselves – despite their DNA degrading every time – which allows them to replace the fallen Cryptosporidium-136 with his successor, Cryptosporidium-137. This is where you step in, taking control of the diminutive but dangerous grey invader and beginning a short odyssey of attempting to communicate with cows, reading minds, impersonating and, most importantly, destroying all humans. Somewhere along the line, you’re also supposed to retrieve the Furon DNA implanted in humankind but that’s hard to keep track of when you’re given a giant death laser.

Tonally, Destroy All Humans! aims for a cartoonish, over-the-top parody of a 1950s USA that’s invaded by aliens while also dealing with the Cold War. Civilians dispense pop culture references, calling Crypto “little green men” despite him very obviously being grey or shouting “They came from outer space!” when they see him. Reading the minds of otherwise incompetent soldiers reveals how they’re venerating their superiors or lamenting the way the brass is treating them, while German scientists express cloaked disappointment at American stupidity. You’re also fighting Majestic, a governmental agency whose men-wearing-black-suits go to any length to convince people that Crypto is anything but an alien. This includes never shying away from any mass manipulation technique, to the point where you’re wondering if you’re actually playing as the bad guy. The game deals in exaggeration and, while it’s clear that it never takes itself seriously, its comedy doesn’t always hit the mark.

A third-person action-adventure at its core, Destroy All Humans’ campaign is made up of relatively short missions taking you across the US and which blend mayhem and stealth with the occasional sprinkle of escorting NPCs and wave-based defense. It’s not a mixture that stands out by any means today and, aside from its arcade-style action sequences, missions tend to be rather forgettable. The rudimentary stealth bits are by far the worst offenders. Crypto is able to scan any human and use their appearance as a disguise via his Holobob ability as long as he’s not seen doing it. This helps him stay undetected and navigate restricted areas without raising suspicion. For the most part, you’ll do your best to avoid or quickly walk through circular areas around Mayhem agents and EMP devices which quickly drain your disguise’s energy, then recharge it by reading the minds of nearby humans. 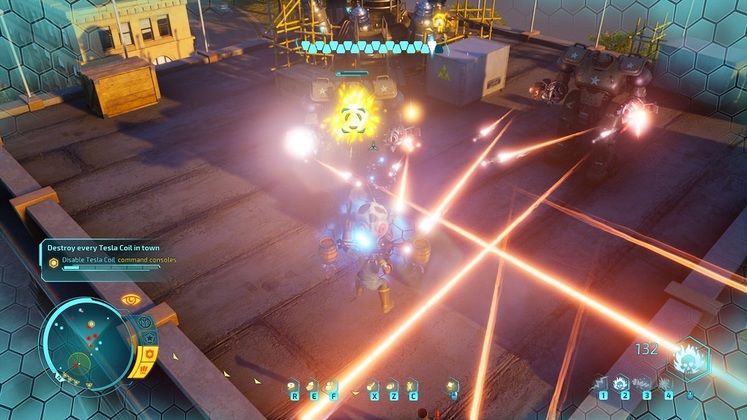 You quickly get the hang of them, at which point stealth missions become tedious walks from point A to point B, despite their short length. Sadly, a good chunk of them also feature instant fail states that trigger when you’re detected, which pretty much force you to play by their rules. In situations that give you the option of using stealth but also allow lethal weaponry, the choice is simple: why try to distract or convince humans that you’re not there when you can more easily disintegrate them? One is more efficient (and fun!) than the other. There’s also a GTAesque awareness mechanic that brings stronger enemies to fight you the more chaos you sow, although it rarely has any noticeable impact.

Where the stealth missions never quite grow into actively requiring you to use all your available abilities – you can distract opponents, make them follow you or forget that you’re there –, those in which you’re given free rein over killing people do encourage you to use your entire arsenal. Your default Zap-o-Matic shoots out electricity that you can upgrade to hit multiple enemies, the only downside being the need to take your finger off the trigger as it recharges. The Disintegrator Ray is better against tanks and robots but also turns killed humans into skeletons before making them disappear, while the Ion Detonator launches a payload that explodes in a large area after a short wait. There’s also an Anal Probe that requires enemies to have their backs turned towards you in order to work, for obvious reasons. 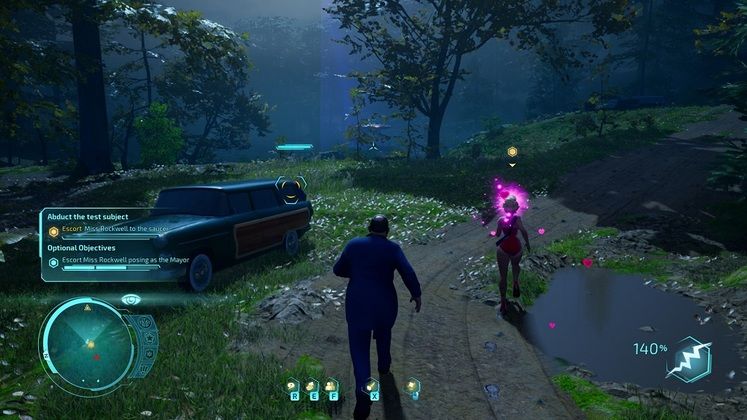 While Crypto is fragile when exposed, his shield – which recharges automatically after a moment of pause – can weather a good deal of damage. Thus, it’s best to keep it charged by either getting out of your enemy’s line of sight – which can be easily done thanks to your jetpack – or extracting their brains using the power of your vastly superior mind to trigger a quick recharge. You can also use Psychokinesis as often as you want, right-clicking to grab enemies and quickly fling them up into the air being one of the best things you can do in Destroy All Humans!

When small destructive weaponry won’t do, you can board your round flying saucer and show the earthlings and their silly metal toys what bigger guns are capable of. As you can’t have a UFO without a Death Ray, that’s your default weapon: a laser beam that chars everything it touches. It’s complemented by the Sonic Boom and the Quantum Deconstructor, both quite potent at leveling entire buildings. Just like you can transmog objects into ammo by repeatedly pressing E, the Saucer’s shields do not recharge automatically, requiring you to drain vehicles by tapping R. Raining down destruction from above is great fun, however, the angle of the camera makes controlling the saucer slightly weird, as you can change its elevation but never properly look up. There’s rarely anything there but, for some reason, being able to just look below always felt limiting. 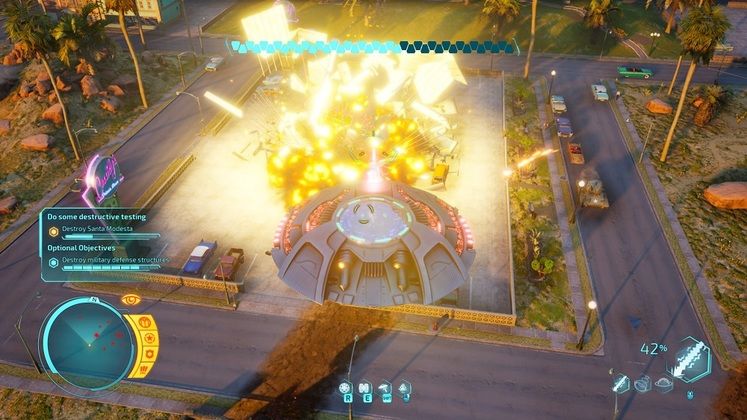 Each mission in Destroy All Humans! also has a handful of bonus objectives like bending antennae or killing specific enemies in a certain way. These reward extra DNA that is used to upgrade Crypto’s powers. Progressing through the story also unlocks its areas for you to freely roam across. They might not be extremely large but have different themes to them, like rural Turnipseed Farm or the militarized Area 42. Each location also has four types of timed side activities that reward additional DNA. They involve chasing drones, abducting anything from cows to everyday objects, and destroying stuff. In between missions, you can choose whether to upgrade Crypto himself or his saucer. The available options range from traditional stuff like dealing more damage and carrying more ammo to weapons having a chance of setting things on fire, more efficiently extracting brains, and having better shields. It’s a standard system but one that does the job.

Destroy All Humans! concludes its inconsistent campaign on a frustrating note: with two boss fights that heavily contrast the rest of its missions due to how drawn out they feel. Although each boss has three phases and different mechanics you do need to look out for and learn, their huge health pools make the two fights take far too long, leaving a sour taste in your mouth upon completion, instead of making you feel like a triumphant invader. Its story as a whole isn’t anything to write home about, mostly succeeding with its humor when Crypto and his wordy handler Orthopox talk, otherwise featuring bland characters and a plot that never quite settles into a proper pace.

Despite having been around since 2005, Destroy All Humans! only now makes its way on PC, running on the Unreal Engine. The visual improvements are visible from the very start in both the game’s smoother, more detailed textures and lighting which successfully changes a level’s mood as you move from the sandy sunlit desert of Area 42 to foggy Union Town and urban Capitol City. Crypto controls very fluidly both on foot and when flying using the jetpack and saucer and, more importantly, the remake’s visual upgrades preserve the original’s style.

When it comes to performance, aside from a few frame drops during the last boss fight, the game ran without a single hitch during our time with it.

Where to Buy Destroy All Humans!

Destroy All Humans! will be available through Steam and can be pre-ordered or bought, depending on when you’re reading this, from the Humble Store. If you purchase anything through these links, GameWatcher may get a small percentage of commission, so thank you for supporting us.

As awesome as it is, the arcade action in Destroy All Humans! is only a part of the experience, struggling to carry its rudimentary stealth missions and hit-or-miss writing. It’s definitely a blast to level entire neighborhoods and disintegrate humans; we just wish we had to spend less time impersonating them. 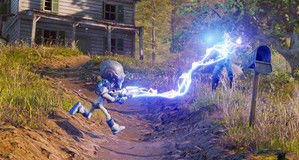