Splash Damage makes a clean kill with a Dirty Bomb

After 2011’s disappointing Brink, fans of multiplayer specialists Splash Damage must have worried whether the studio had lost its mojo when it came to making team-based objective shooters. Dirty Bomb is the team’s attempt to get back to what they do best.

Splash Damage makes a clean kill with a Dirty Bomb.

The game takes place in a colourful, near-future London, which lies abandoned after an unspecified man-made disaster. Here, teams of mercenaries battle it out to control key zones, or make off with vital resources. Dirty Bomb has a neat, colourful aesthetic, somewhere between the ultra-glossy, futuristic sheen of Mirror’s Edge, and the cartoonish grubbiness of Brink. The backstreets of London make for a great physical environment, too, offering twists, turns, switchbacks and cramped close-quarters fighting.

The gunplay itself is very solid indeed. It’s less twitchy than most modern shooters, rewarding measured control and target tracking rather than catlike reflexes. Though there are iron sights to aim down, firing from the hip is a viable tactic even at range. Guns feel and sound weighty, nailing that indescribable formula for ‘gunfeel’ that marks out the best shooters. There isn’t a huge roster of weapons to choose from right now (more on that later), but what’s there is very solid.

Depending on your character choice, you’ll approach combat in a very different way. Speedy characters zip in and out of battle, firing bursts from their SMGs, and evading returning fire. Heavies lumber in, flinging grenades and accepting punishment that would kill a more lightly-armoured character, while mechanics repair objectives, plant and defuse bombs with lightning speed. Beneath all these options lies a surprisingly tight balance. No team can win without a good mix of heroes, all working in tandem to push forward and take objectives. It’s chaotic, yes, but Dirty Bomb offers a solid underlying structure that lesser shooters lack. 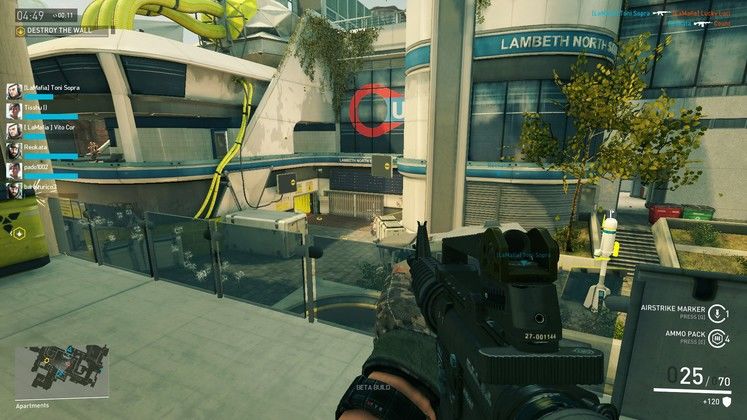 Maps are varied, and full of little shortcuts, switchbacks and elevations that make combat unpredictable

Currently there are two playable modes. Objective mode is a simple one-off level, with one team defending and one team attacking. Stopwatch adds a timer element, in which two teams battle to complete objectives in the fastest time possible. Objectives range from repairing and escorting APCs, to planting bombs and retrieving canisters of sensitive materials. Though the map roster isn’t huge, the flow of the game is always changing, and some clever level design means that games rarely play out the same way. I particularly like the optional objectives in each map that can be destroyed or repaired in order to open up new routes, like a gas pump that can be fixed to suck the toxic gas out of a tunnel, unlocking a flanking shortcut.

Clearly taking inspiration from the MOBA genre, the game drops traditional classes in favour of individual hero characters with their own unique skills. Certain heroes fall into set archetypes – there are several variations on the medic, the soldier, the engineer and artillery support – but each offers a little tweak of their own. One character might focus on an all-or-nothing cascade of artillery rounds, while another has a laser designator which allows you to pinpoint specific locations for a more targeted burst. 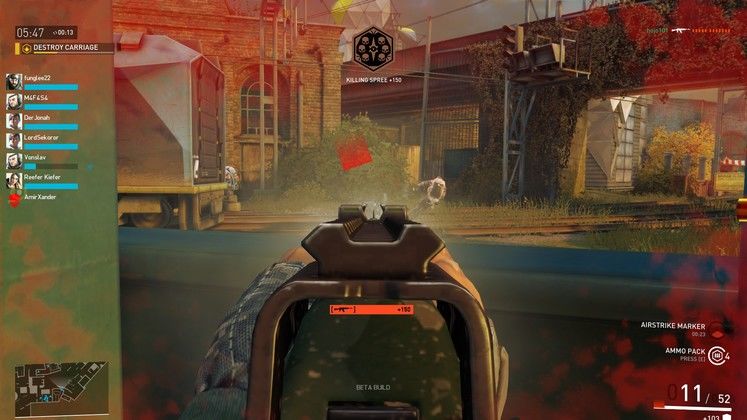 Combat is quick, brutal and satisfying, favouring control and accuracy over lightning reflexes and spray-and-praying

There are, inevitably, certain heroes that stand out more than others. Aura the medic can whack down a health-restoring station, and a common tactic is for players to camp nearby with a shotgun, blasting people before they can wear down her quickly regenerating health. Likewise, Skyhammer the artillery expert is a popular choice, and in games with more than six players per side, his devastating bombardment can be triggered by multiple players with frustrating regularity.

Generally, though, the characters feel well balanced. The focus on objective play means that it’s not actually that important if you dominate the field with kills, because your team can quickly get rolled over if you don’t contribute to defending or assaulting the next target. Defusing a bomb, or opening a side-channel into the enemy base will net you far more experience than tagging a few enemies with a well-placed grenade. The subtle variations on skills and weapon loadouts for each character are a nice touch, but you’ll have to splash out some cash or spend some serious time playing if you want to see how every character handles.

From the off Dirty Bomb gives you access to two core characters, with another three on random rotation. Yet more can be bought with credits earned from playing the game, or for real cash via the Steam store. To access new loadout cards, which offer different perks, weapons and skins, again you need to either splash out cash or dip into your in-game credit account. The game does offer a neat upgrade system via which obsolete cards can be traded in for higher tiers 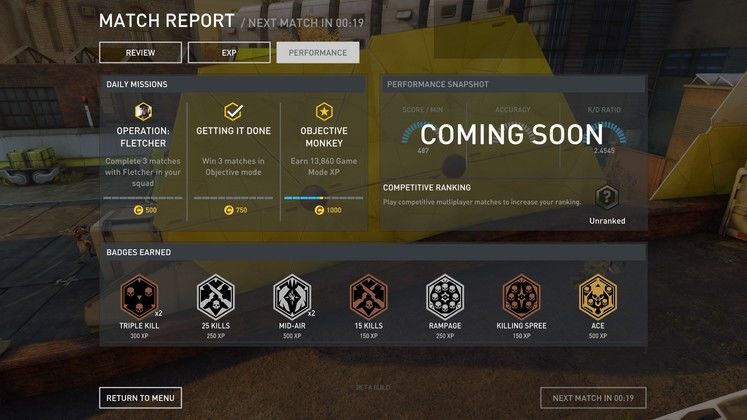 Though the game rewards you more for objective-based play than straight kills, getting an Ace award or a couple of Killing Sprees is always nice

It will take you time to unlock a full roster of characters. Daily missions and reasonable post-match rewards mean you steadily accumulate credits, but unless you’re comfortable splashing out £4.79 to £7.99 per new character, you’ll have to be patient. That said, there’s no pay-to-win here, and the base game you get for free is fun and content-heavy enough that I’m sure most players will be happy to drop a small sum on a hero that catches their fancy. I never felt that the game was cajoling me into splashing out cash, and despite spending absolutely nothing on the game so far, I’ve already saved up enough to buy one of the 50,000 credit bonus characters. This model won’t be for everyone, but I think it’s a solid example of a free-to-play system that doesn’t feel exploitative. We’ll see if that changes over time with the introduction of new content.

Dirty Bomb is off to a great start, offering a blend of fast-paced team-based action that I hadn’t realised I’ve been missing since the glory days of Enemy Territory. If I was being harsh I could say that there’s nothing particularly innovative here; as fun as the gameplay is, it’s a refinement rather than a radical rethink. Dirty Bomb isn’t a game that sets out to change the world, it just focuses on doing one thing well, and succeeds admirably. There are some balance issues to tweak, and the game’s performance could stand to be smoothed out a little – I occasionally experienced some odd end-of-map FPS stutter – but those are relatively minor imperfections. Dirty Bomb is well worth your time already, and I’m excited to see what Splash Damage has in store as the game continues to develop.

Splash Damage makes a clean kill with a Dirty Bomb. 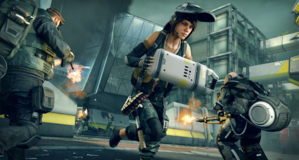