The last, most important and essential piece of story DLC for Bioware's epic RPG is here. But is it any good?

You may disagree, but we here at GameWatcher loved Dragon Age: Inquisition so much that we gave it Game of the Year last year. However the release of The Witcher 3 has made Inquisition’s faults stand out more, and in our heart of hearts we preferred Dragon Age: Origins and its more story-based non-open-world style anyway. Now the tale of Inquisition is at last coming to a conclusion with Bioware’s final piece of story DLC - Trespasser. Is it worth getting, even for the ridiculous price of £11.99/$14.99? Read on to find out. 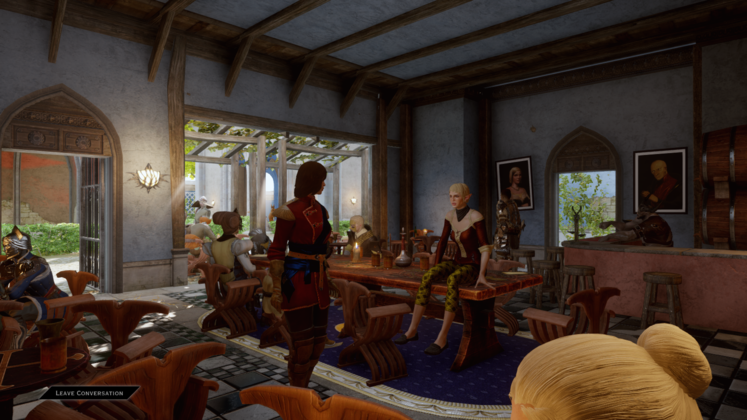 One last time to catch up with old friends. And Sera.

Whereas the previous DLC for Inquisition have all taken place during the main campaign and so have felt a little inessential, Trespasser takes place two years after the defeat of Corypheus. All the Fade breaches have been closed and the kingdoms have returned to a state of peace. Now your Inquisitor has been summoned to a council headed by the Chantry, Ferelden and Orlais to decide the fate of the Inquisition. However things will not be that simple, as a new threat stands ready to conquer all if not stopped in time. It’s a suitably epic finale with some neat twists and wonderful character moments, and that’s not all.

The biggest criticism of Bioware’s Mass Effect 3 was that despite making universe-changing decisions by the end none of it mattered. Trespasser feels like Bioware trying to make up for that error. While I can’t say that choices made from previous Dragon Age titles carry over, many decisions I made in Inquisition had a huge impact on the plot of Trespasser. I don’t want to get into spoilery territory even for the end of Inquisition but there are consequences all the way through Trespasser, from how you treated characters to who became head of the Chantry. It may be a small epic story but Trespasser feels distinctly personal, and as such is hugely satisfying to play - and even better, the choices keep coming! By the end your actions will have decided the fate of the Inquisition and all of the major characters, and there’s even a Origins ending-style “what happened next” to read through. Even just being a DLC pack it honestly rivals Witcher 3 for its sheer amount of choice/consequence loveliness. 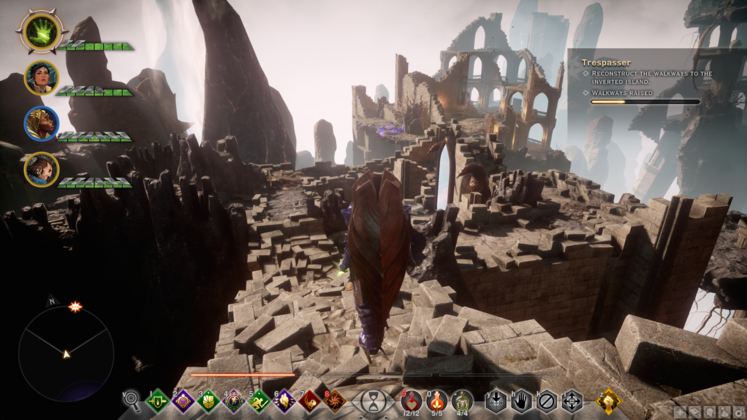 Dragon Age: Origins hangs heavy over Trespasser, for better or worse. After spending 3+ years creating a gigantic and insanely detailed open-world for Inquisition Bioware must’ve been disheartened by everyone saying they preferred Origins instead, and Trespasser feels like a return to that play style. Whether that is a good thing is up to you dear reader, since that means ditching the gigantic open areas in favour of a more confined, branching but slightly linear adventure. The reason I prefer this Origins style over Inquisition is that it cuts down aimless wandering and forces Bioware to concentrate on storytelling and combat, which is what Trespasser is all about and does well. If however you’re expecting a Jaws of Hakkon-style huge new map to explore you’ll be disappointed.

I’m fine with the more confined “just get on with it” style, especially as The Witcher 3 is threatening us with its own two giant expansions soon, but sadly there is another problem which is entirely down to an odd design point on Bioware’s part. Let’s put it this way for Dragon Age fans: a big part of Trespasser is a linear journey through the Deep Roads which you then have to backtrack the entire way, followed by a maze-like journey through the Fade which you then also have to backtrack through. That’s the two most hated parts of Origins making a big re-showing here, and both require taking the same journey twice. It feels like a cutting-corners, length-padding measure, and if that’s a reference to Dragon Age II’s torturous level design it’s an Easter Egg too far. 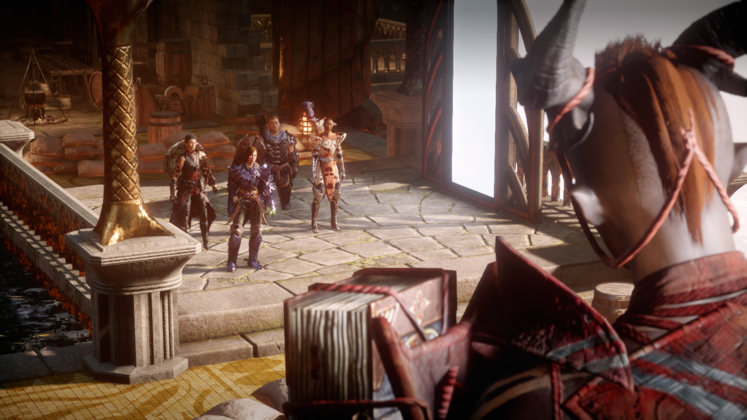 Expect an epic end that leads directly into Dragon Age 4.

Nevertheless for the most part it’s really good, and even with the linear design Bioware still manage to pack in reasons to explore. One particular secret had me backtracking all over the Fade to work out, and I’m still not sure how to get rid of those annoying purple flames. Combat is the main focus though outside the fun story and character moments, and players can expect some of the most difficult battles of Inquisition - this ¬is the grand finale after all, despite the Inquisitor’s powerful new Focus power. However I did appreciate how at least one epic boss encounter can be settled non-violently, something I wish happened more often in games. More irritating though was a constant bug I encountered during battles that froze my characters in place, and the only way to get them doing anything was to manually select them and jump. Hopefully that’ll be fixed soon.

Bioware have this annoying habit of making at least one of their expensive DLC packs indispensible to the overall series storyline, and they’ve done it again: if you’re planning on playing Dragon Age 4 you need to play Trespasser. Fortunately it’s worth it, although not without a big “but”. The story continues well, brings in consequences to loads of your previous decisions then adds seismic new ones, and even takes time for some humorous moments. In terms of gameplay it feels more in tone with Origins than Inquisition, which I’m fine with… but if you’re expecting a gigantic new area to explore like previous DLC Jaws of Hakkon you’ll be sorely disappointed, and it won’t last you more than a few hours so that £11.99/$14.99 price is still too high. Nevertheless for this Dragon Age fan Trespasser was a hugely satisfying end to Inquisition, and the final choice alone will have huge ramifications. Roll on Dragon Age 4.

Letting an epic boss go free. Or the “decide how Dragon Age 4 is going to start” ending. 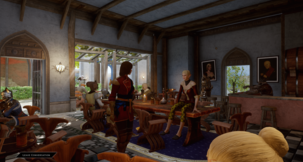