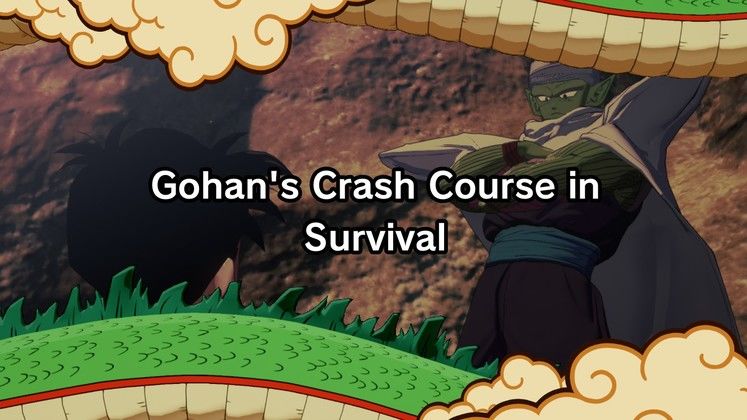 I have never played a Dragon Ball game. That sounds impossible, there are so many that you can trip over them. I saw a couple episodes of both Dragon Ball and Dragon Ball Z on Toonami as a kid, but I had no idea what was going on (Pokemon and Sailor Moon were more my thing). Honestly, I still didn’t before I got a copy of this game for work. It might not lend credibility to start a review for the new Dragon Ball game like this. However, it never hurts to have a layman’s opinion. This is a series that’s been going on since the 80s, and it’s easy to get overwhelmed by choice because of that. It’s why Dragon Ball Z: Kakarot is interesting, staying with a more well-tread aspect of the franchise over telling a new story. Will this attract non-fans like me, or will it only be for the stalwart Dragon Ball lovers? Let’s find out.

Kakarot retells the story of Dragon Ball Z, splitting the show’s iconic arcs about omnicidal monsters and intense training into four separate sagas. It makes the game an economic adaption of the anime, giving players a CliffsNotes rendition of key events. Rewatching this story thirty years after its release also show how times have changed. Describing it as outdated might be too kind. For example, Mr. Popo’s appearance is always a shock. It might be more accurate to its source material than the dub we saw as kids, but having a character that’s obviously blackface is uncomfortable at best. At worst, it’s a kick to the jaw every time he’s on screen. While Kakarot is great for people who have never watched the show, it’s redundant for anyone who binge watched it in preparation. Even as the game trims the fat, pacing feels a bit off. Shonen anime is notorious for how long winded it can be, and Dragon Ball is no exception. I couldn’t help but fidget during my playthrough’s slower moments. If you love that formula however, Kakarot has you covered. 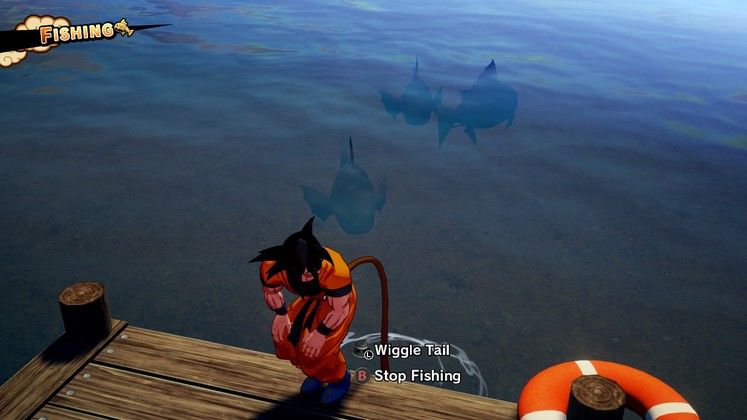 Like other open world games, Kakarot begins with a chock full of tutorials that don’t end. This is thanks to its mechanics upon mechanics. We’ve got world exploration, fighting, resource collecting, crafting, cooking, emblems that you can level for in-game bonuses, and so on. It’s overwhelming at first, but you do get used to it when you give it a chance. The basic summary is that the game splits into two modes like similar Japanese open world games: exploration and combat. Exploration has you fly across different areas across the Dragon Ball universe to train, collect resources, make meals, get into small fights, and continue the story. The flight mechanic is the highlight here. I’m always a sucker for flight mechanics like it ever since Gat Out of Hell, and Kakarot delivers. It’s not only a great way to travel in-game, but the boost ability can instantly defeat monsters that are under-leveled. It’s a neat touch, and I appreciate any game that allows for those sorts of skips.

That speediness also comes in with resource collecting. In the world scattered about are Z orbs and D medals. Z orbs are used to upgrade skills while D medals are used to unlock training sessions to unlock new powers for fights. You can also fly to collect food from trees and fields. This food can then be cooked for stat increases (both temporary and permanent). While this sounds helpful, it’s not a necessity. The amount of experience gained in quests is enormous, so you don’t often feel under-leveled. It’s still fun to zip around for some onions, but it feels insubstantial at the same time. The most egregious example of insubstantiality is its racing minigame. Unlocked at the halfway point, its slowness compared to flying is so noticeable that it sucks out the fun fast. While your vehicles can be upgraded to move quicker, it comes up too late to be worthwhile. 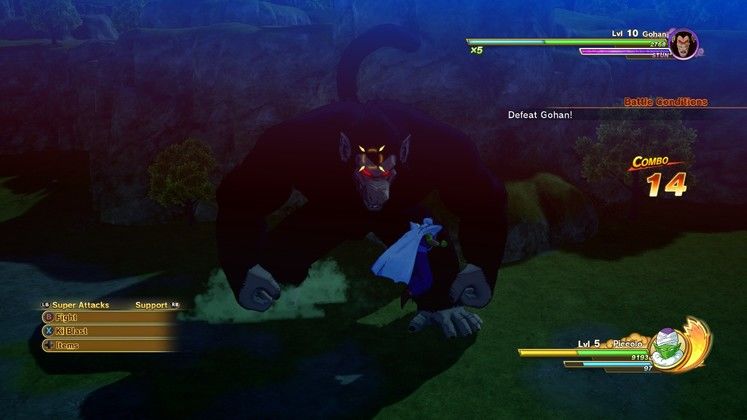 But the main reason people care about this show is the action (feel free to tell me I’m wrong in the comments). Kakarot, in turn, delivers a ton of it. Fights in Kakarot are in a 3D plane and have you hovering, forcing the player to juggle between dealing blows, dodging large-scale attacks, and finding the right time to use a Kamehameha. Evading attacks plays a big part of combat. Since most enemies have attacks that stun or knock you away, it’s vital to pay attention to the fight. Luckily, these massive attacks are telegraphed with red auras and voice clips. It’s fair to the point of being too forgiving. Thanks to the cheapness of healing items and the influx of sellable resources, I only lost at optional fights I wasn’t leveled for. Add that with some fights that go on for too long and you have a stylish system that can turn stale.

Kakarot was made with love for the show and it’s obvious. The world is bright and colorful, the type of aesthetic you’d expect from Akira Toriyama’s style. I understood why people love his work, it aged exceptionally well. This is elevated by the sound design. It could be easy to just lift sounds from the show, but there is a definite skill in how they were applied. It makes finishing blows more satisfying than expected. It’s also worth mentioning the joys of the dub, bringing that classic DBZ cheese with gusto. The main issue comes with the limited voice clips in-game. You will hear the same three clips constantly when you grab Z orbs or resources. This isn’t always a sticking point for me (I wasn’t bothered by Greedfall’s limited combat banter). However, thanks to the high energy performance of a dub like DBZ’s, it gets old fast. 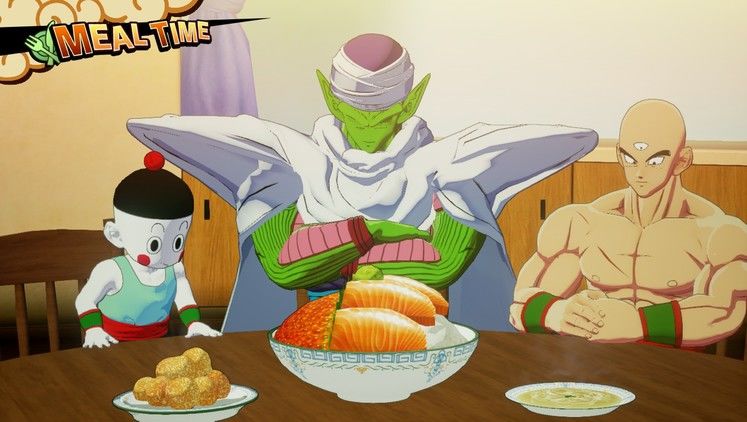 Even if I sounded negative in this review, Kakarot definitely held my attention. This is an accurate Dragon Ball game for better or worse. It comes with the visual flair and iconic sound of the show alongside its over-the-top violence. It also comes with its fair share of meandering moments, outdated characters, and pointless minigames. If you wanted to get into DBZ but didn’t know where to start, this is a good introduction. But if you couldn’t care less about Dragon Ball or Eastern open world games, it won’t make you a believer.

Kakarot’s version of the Frieza saga has some of the best fights of the game. 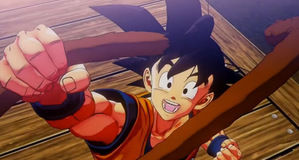