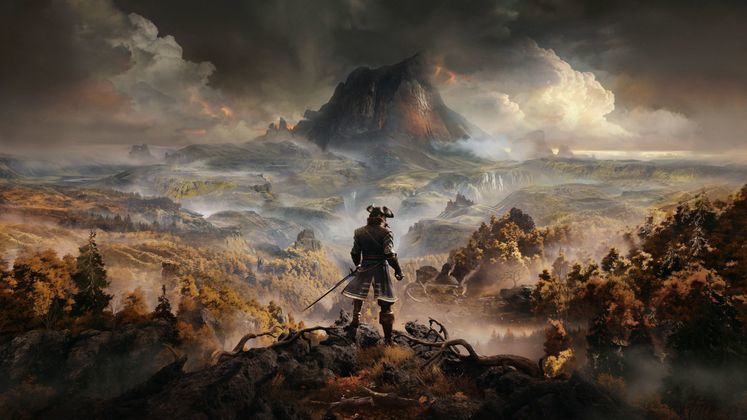 Sometimes you don’t realize what you’re stepping into when you start a review. The simple story is that I was asked to review something and I accepted it. However, I didn’t realize a couple things;

1: The embargo would lift in three days when I was handed the key (for comparison, a key is usually received a week or two before release).

2: This would be a sprawling RPG, a genre notorious for being long as hell.

3: The game was Greedfall, a game from Spiders that has garnered plenty of buzz thanks to being an RPG with a colonial bent.

I might’ve heard some of the hype surrounding the game, but I didn’t know how huge it was. The discussions surrounding colonialism, the think pieces, I missed the majority of it. Even my coworkers in rural Pennslyvania were discussing last Friday about how much they wanted to play it. Suffice to say, it can be overwhelming to dive into this game on a tight deadline. But that’s not as important as the game itself. Does Greedfall bring something new to the RPG? Does it use its colonial trappings tastefully? Strap yourselves in, we’ve got a lot of ground to cover. 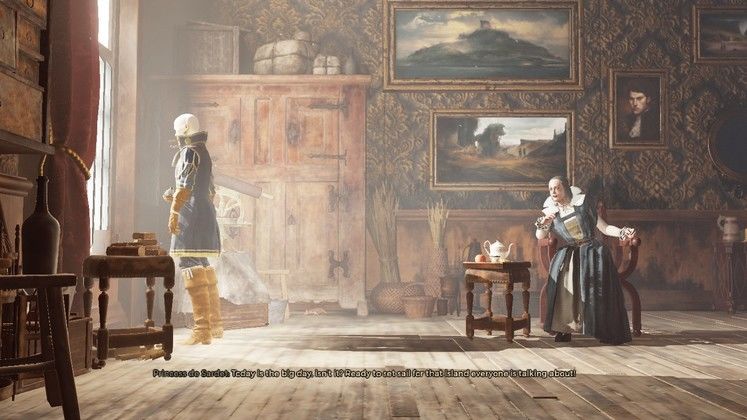 Greedfall takes place on the newly discovered island of Teer Fradee and you play De Sardet: Emissary to the Congregation of Merchants and cousin to the newly appointed governor of the recently established New Serene. With a horrible disease plaguing your home country, you set sail to Teer Fradee to represent your cousin in the new world and possibly find a cure. But something strange is afoot on the continent and you seem to have a connection to the native population. It’s up to you to find a cure and figure out the mysteries of the island whilst dealing with the politics of a colonized world and its factions.

The four main factions are the business-focused Merchant Congregation, the pious Theleme, the science-driven Bridge Alliance, and the Native population. Alongside them are the mercenaries of the Coin Guard and the Seafaring Naut, acting as neutral figures in the conflicts of the new world. Each of them bring something diverse and interesting to the world and the tension between them is heightened thanks to their faux civility. That’s far more interesting than a straightforward conflict. From the Theleme’s dogmatic inquisitors to the Alliance’s unethical methods of science, it gives a great feeling of forced compromise. It really cements the fact that you have to work with people you might not like. This is emphasized by some strong VA work, especially from La Sardet’s performer Cassie Layton. Even when some characters aren’t as interesting as they could be, the voice cast definitely works hard to bring the world to life. This can be negated by the repetition of quotes in combat, though that’s easy to forgive. 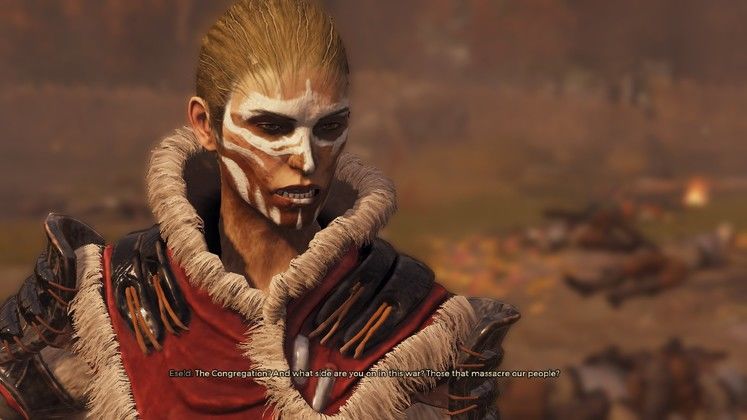 But it’s impossible to talk about Greedfall without mentioning its treatment of colonialism. As a preface, I’m a white Australian American. Both of my identities came through imperialism. I say this because discussing colonialism whilst benefiting from it can be awkward. I want to be clear about that conflict when I say that this game could’ve treated it a lot worse. It makes it explicit how it made the native population of Teer Fradee suffer. They are subjugated to forced experimentation and conversion, with many people treating them exotically at best and inhuman at worst. It doesn’t shy away from their injustices nor exploit it shamelessly. It makes it clear that the methods of colonialism bring heavy damage to the land and its people.

That doesn’t mean it’s flawless. Native people are portrayed with their magic more ritualistic and alien compared to the magic of colonialists. They’re inspired by Native Americans, but are changed enough to attempt disconnection from American history. This is to the point of giving them more European features. That disconnection isn’t strong enough. They still follow the general stereotypes of Native Americans in their connection to the land, their rituals, and their syntax in speech. Once you understand the connection the protagonist has to the native populace, that adds to the discomfort. It’s such a clear reminder that it’s made from a European perspective, and I can’t help but be curious as to how people less privileged than me would react to their design. It might tell an engaging story, but those concerns stay with you as the game goes on. 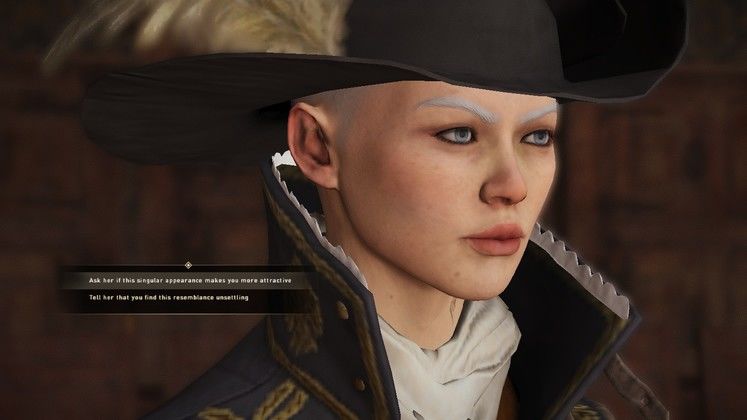 If you know western RPGs in the vein of BioWare, you’ll know what you’re getting into. You take quests, deal with the tensions of factions, fight monsters, level up your attributes and maybe kiss someone in your party. The world of Teer Fradee is full of people to help as emissary and it’s very easy to get sucked in. Most of the time in-game is spent talking, figuring out the problem and the best solution. You can try to use diplomacy, threats, stealth, or good ol’ fashioned violence. As you pick up raw materials from the world and its creatures, you would be able to use them to create traps, potions, and improvements to your weapons and armor. If you haven’t put in the levels for some skills, you can always hire someone to craft that important quest item.

Combat is what you’d expect from an action RPG. You choose to either use magic, melee, or firearms as you level up those respective trees. An armor level is alongside your health, and the moment that breaks is the moment that every hit could be your last if you aren’t prepared. I wouldn’t go as far as to say it’s like a Souls game, but it definitely requires you to pay attention to the battle. The developers added something extra with The Tactical Pause. Injecting some strategy to Greedfall, the pause lets you decide what to do next in a fight and give additional info on your enemies. This is sadly the weakest part of the game. While mixing more strategic elements to action games can work, like Transistor or the V.A.T.S. revamp in Fallout 3, the strategic pause overcomplicates fights and slows things down. It doesn’t improve things, but you will need it on higher difficulties thanks to more aggressive creatures. This is one of the few times where there’s no shame in playing on easy. Greedfall’s gameplay isn’t too unique, but it does give a proper cycle to the game that makes for an engaging experience. 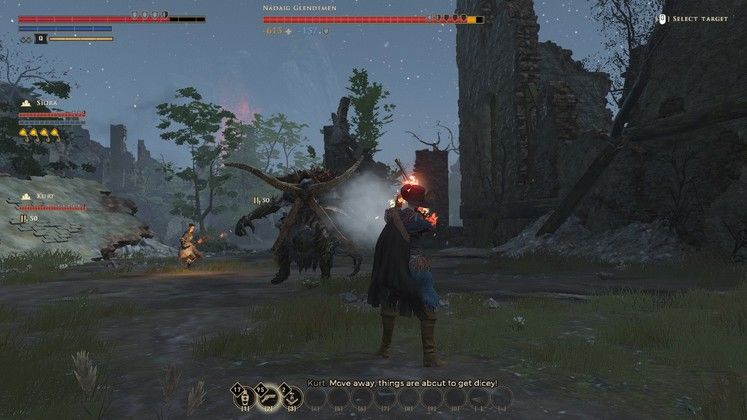 As GameWatcher’s heretic with a gaming laptop, I wasn’t able to crank up the settings to max (hence why the screenshots look the way they do). However, there is some real beauty to the world even on low. You can understand why Spiders chose this setting, it allows for a contrast between industrial and natural that really makes the world pop. This is especially true with the monster design, able to be unusual but fitting for Teer Fradee. The monsters, like the boss-esque Nadaig, are powerful but aren’t unnatural to this world. It’s a great example of how to design something that feels otherworldly whilst appropriate. The only issue, and a minor one at that, was facial animations. They aren’t awful, but they do have a stiffness to them.

Like many games of Greedfall’s size, there’s gonna be some glitches. However, they were all minor and graphical in nature. You will definitely encounter some silly ones. The one I dealt with constantly was turkey models stuck in a T-pose. This is my first experience with a Spiders game, and I was pleasantly surprised by how smooth the game ran after I heard complaints about their previous titles. There were the occasional stutters and pauses during conversations, but I never felt like I was going to lose my progress to a crash. 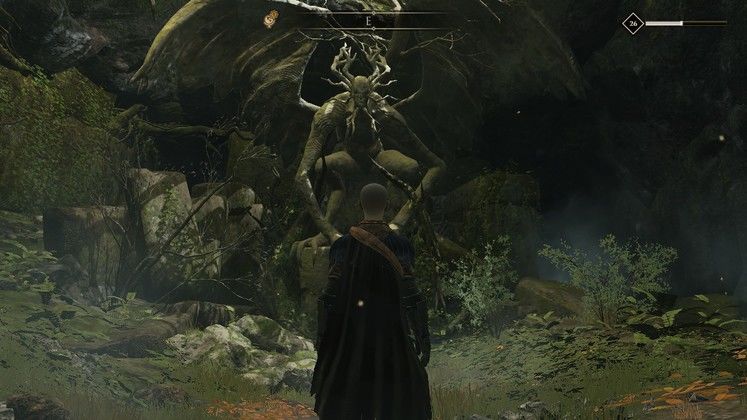 Greedfall, even with its flaws, is a game that’s very easy to sink time into without regret. For a game about fighting a horrible disease, it ironically grows on you. It would be difficult, even impossible, to make an unproblematic game about colonialism. But the one Spiders made is engaging and a lot more open about the sordid nature of it than expected. If you’re craving that type of BioWare-esque game and want to pretend Anthem doesn’t exist, Greedfall has you covered. It’s a wonderful addition to any RPG lover’s library and will be well worth their time.

The sidequest regarding a “ghost” army and learning what conditions led to a recruit’s death.