We take a look at the budget dungeon crawl RPG, Dungeons of Dredmor

The rogue-like is perhaps the oldest roleplaying game, with such titles as the eponymous Rogue, Moria and Hack. Basically, players would crawl through a randomized dungeon, trying to live as long as possible before dying - and unlike most RPGs, losing your character was permanent, with only a headstone telling the player how they died and at what level.

What made the rogue-like so popular was the loot grabbing. Randomly generated weapons and armor dropped at a well-timed rate gave them that "just one more try" feel, which is why the Diablo series, which was a glorified rogue-like, was so addictive.

Dungeons of Dredmor is such a game, but self-aware and knowing, reveling in the brutality of the rogue-like, and gleefully anticipating your death, as your own character admits they'd rather be anywhere but in the dungeon. While the game offers an option to turn off the iron man mode (you can only save to leave the game, and death is permanent), it almost feels like putting the game in God mode to do so. Permadeath is so integral to the game, it's almost cheating to turn it off.

Dredmor is a simple concept, but the game takes that concept and fills it out to its limit. Instead of a character with a few attributes and a class, the game offers a list of levelable traits, such as being able to wield swords or crossbows or being able to detect and disarm traps or mix potions. From there, players can do most things that they might be able to do in World of Warcraft like crafting or building armor.

As for the gameplay itself, it's pretty simple: the game is more or less turn-based, with each step for the adventurer being a step for the monsters. Players mouse click to attack, basically whacking or shooting at a creature as you might in any classic rogue-like. As the monsters start evolving from the chicken-like Diggles to more monstrous creatures, the player has to pause and really examine how to combat the enemy, especially if some of them are sleeping. Multiple enemies attacking at once can mean a deadly mauling.

The graphics are reminiscient of the old LucasArts SCUMM games - large and colorful, which knowingly belies the hardcore engine underneath. The camera angle, however, is a slightly skewed 3D which takes a lot of adjustment on the player's part. Even being used to it, players may find themselves frustrated when trying to walk through a horizontal hallway.

Otherwise, Dungeons of Dredmor is a fun game, especially for rogue-like veterans, who will get its dry British wit and genre in-jokes. The game is basically the next generation of the true rogue-like, much like Fatal Labyrinth was before it. At $4.99 USD, it’s almost a no-brainer to pick up this indie gem.

Surviving an encounter of ten Diggles. Granted, it was accomplished by running away, but it was 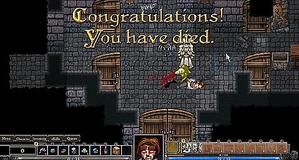