Dungeons: The Eye of Draconus

Dungeons: The Eye of Draconus Review

Imagine, if you will, that the producers of such low-brow movie parodies such as Scary Movie and The Starving Games decided to make a game based on the classic side-scrolling brawler. Now imagine that upon making such a game, they decided to cram it full of such crude humour that they almost forgot that there was a game underneath it all in the first place. Dungeons: The Eye of Draconus is one such affair. Largely unfunny and somehow completely failing to capture both the charm and the execution of those old-school brawlers in any sort of measure, Dungeons: The Eye of Draconus does little to endear itself.

Right off the bat it’s clear that the developer knows their arcade history, but sadly is seemingly keener to squander that knowledge with cheap humour rather than make any meaningful attempt to push the genre forward. After choosing one of three characters in a title screen that directly parodies Golden Axe (the quasi-iconic skeleton in the background is adorned with a leather cap and ball ‘n’ gag here), the game begins in earnest.


Now, the side-scrolling hack and slash brawler is hardly the most progressive of genres and quite honestly, the creative latitude that developers have with it is usually heavily restricted. Dungeons: The Eye of Draconus however, really does nothing with the formula that hasn’t been done much better elsewhere before.

We're talking the basic of the basic here. You progress from left to right, attacking multitudes of familiar enemies with preset combo attacks, a jumping attack, a dash attack and a special attack over and over again. Worse still is the fact that the fundamental act of bashing things on the head just doesn't feel satisfying. Each strike or blow that successfully lands misses the thud and the crunch that Sega's arcade classic used to produce and as such, Dungeons' combat feels limp and unsatisfying by comparison.

Naturally, there are also health pick-ups and items that help replenish your special attack meter, in addition to a small selection of ridable creatures with their own attacks, but really, it all just feels massively uninspired with no real ambition to further the genre in any real capacity.

Where Golden Axe and its ilk tried to change things up a bit by introducing a decent rotation of foes to fight against, the enemies seen in this game, particularly the Kolbolds, outstay their welcome early as they are used over and over. Repetitious foes aside though, the developers have at least made the conscious and sometimes amusing choice to parody the usual fantasy archetypes. Dungeons: The Eye of Draconus allows players to tangle with an army of frat boy Orcs, leather buttless chap wearing skeletons (see the character selection screen) and a pair of wildly homosexual wizards to name just a few.

Oh and it gets better too. When it comes to choosing one of the three heroes to play as, we have the barbarian who, in the absence of a six-pack of abs looks like he's been drinking six-packs and has an impressive amount of girth to show for it. Then we have the thief, who while isn't really dressing anymore skimpily than in any other fantasy brawlers, is referred to as a 'whore' by the game's narrator and has a seeming penchant for gold and treasure. Finally, we have the cleric, who aside from being cowardly and hugely camp to the nth degree, actually cannot perform any holy duties at all.

In more down-to-earth gameplay terms though, one of the main ways that the heroes differ from one another is in the special abilities that each one lays claim to. The barbarian for instance, can become enraged and inflict extra damage, the thief meanwhile, can turn into a whirling dervish inflicting damage on anything that comes in contact with her, while the cleric can conjure a fire-breathing hen that when killed, doubles up as a roast chicken meal for your heroes.


Tragically, the presence of a projectile throwing cleric, utterly upsets the balance of the characters available makes him, a painfully obvious and easy choice to complete the game with. The reason why games like Golden Axe and Final Fight don't have a player character that can shoot infinite projectiles is because that would make the game far too easy on the account of no enemy being able to touch you; yet that's exactly what happens here. As the wizard cleric character, you can literally blast your way through the game on the default difficultly setting with very little effort.

Away from the combat grind, the game tries to include non-combat sequences to try and break up the action a little bit. Sadly in one example, what should have been a welcome break from the monotony of regular play turns out to be a frustrating stage where you have to escape an insta-death rolling boulder that tumbles behind your character.

It’s just a painfully misjudged segment to have in the game and one which further tarnishes its homage, such as it is, to the hack and slashers of old.

Again, the game does absolutely nothing to try and further the genre and in the vicinity of recent efforts such as the excellent Castle Crashers, a game which deftly combines comedy with a progressive take on the arcade brawler genre, Dungeons: The Eye of Draconus unknowingly invites comparisons that it cannot possibly hope to survive.

In regards to the game's technical presentation, Dungeons is a mixed bag. Some nicely detailed backgrounds are let down by small sprites, object clipping, some less-than-smooth animations and a bizarrely small score tracker.

And then there are the crashes.

Frequently the game would either crash completely to desktop, or, as is more commonly the case, a debug screen would appear causing you to lose control of your characters completely, with both the latter and former demonstrating a distressing lack of polish for a supposedly finished game.

The audio side of the equation fares better conversely, with deliberately amateurish voice acting (you can hear the echo of the recording studio/attic) lending a sort of trashy charm to the proceedings which in turn is ably complimented by a frantic rock soundtrack.

It should also be noted that the game supports up to three players in co-operative play online and local play too. Sure enough, it’s not totally inconceivable to see two or three friends having a meagre amount of fun with Dungeons: The Eye of Draconus, but to have such fun sustained would require casting the sort of blind eye to the game’s many failings that only the strength of truly potent alcohol could provide.


Some folk might argue that Dungeons: The Eye of Draconus combines comedy and old-school side scrolling action in a way unlike any other game before it and yet the game already has an unassailable peer in that regard; Castle Crashers, A game which does it all a great deal better anyway.

DUNGEONS: THE EYE OF DRACONUS VERDICT

As such, if you’re hankering for a truly excellent side-scrolling brawler, your money would be better spent on that instead and not this effort which seemingly places a premium on lewd college humour above anything else.

Summoning a deranged looking, fire-breathing hen to lay waste to your foes.

Dungeons: The Eye of Draconus Essentials 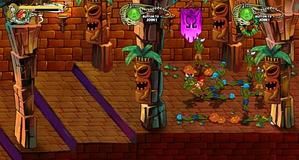