Eador: Masters of the Broken World

Eador is a frustrating game. On the one hand it’s quite good; on the other... it’s really not. This turn-based game is half tactical battles, half kingdom management, with a light dash of RPG in the form of heroes and quests. The world of Eador is shattered into a million pieces, because somebody long ago thought it was better that the world be destroyed, then fall into the hands of chaos. The player assumes the role of one of the deities of Eador, whose job it is to try and reform the world because, surprise surprise, it turns out that wasn’t such a good idea.

In the campaign mode, you’ll conquer Eador shard by shard – at first, the ‘shards’ or game maps are tiny, with only one or two opponents. You yourself also start with a limited number of options. Shards are divided into tiles – like Civilization, I guess, and each tile has a town or settlement on it (with the odd tile that’s barren or impassable). Every time you enter a shard, you start with a single keep on the map and some starting gold and gems (the two principle resources in the game). From there, you have to hire your first hero, recruit an army, and start subjugating the surrounding tiles to build up your domain. The tiles closest to your keep will be easiest to conquer, with the difficulty getting greater and greater the further afield you go. Some tiles can be conquered through non-violent means – you can bribe them, offer them an alliance... but by and large you’ll be using the sword to make your point.


Heroes are central to playing a game of Eador. Without them, you can’t do anything, and there are many facets that require their direct attention. Conquering tiles, for one, but when a tile is conquered, the interaction doesn’t stop there. Your heroes can ‘explore’ tiles, which may reveal hidden locations you can visit. These locations range from ruins and caves that trigger tactical battles you can fight for spoils, to unique vendors for your heroes, to NPC’s who can give you quests. Exploring also adds more room for the settlement to grow, which improves income. Heroes are also your only real defence against enemy heroes. Only local Lords and other Masters use their own heroes, and while in the early game you’ll mainly be kept apart by neutral tiles, eventually your domains will meet. If there’s no scope for diplomacy (you can’t greet with local Lords, for example), then you’ve got a war on your hands.

This is where the RPG element comes in – there are four classes of Hero – Warrior, Rogue, Commander and Wizard. Each class has diverse abilities, and when they reach level 10 they can diversify more. Your army troops also level up as you go along as well. Each tile has its own personality, with many different races inhabiting a shard. Halflings, Elves, Orcs... The questing system needs a bit of work though, as a lot of them so far seem to be asking you to kill x amount of a certain enemy type. Considering you can’t control who you fight in any given situation, these particular quests can take a while to complete, and the rewards can sometimes not be worth the effort.


Managing your domain, thankfully, is one of the few things you can do without needing too much interaction from your hero. You have to make sure the money is coming in, as that’s what pays for your troops. Your capital will earn the most gold, and you can improve that by constructing buildings. There are many ‘types’ of buildings – Craft, Merchant, Military, Entertainment, and these are split across four ‘tiers’. Some buildings you’re only allowed a limited number of, and the later tiers have prerequisite buildings you need to build first. Other buildings also allow you to construct improvements in the tiles you conquer – whether it be a pub to improve the mood, or a mine or windmill to boost income. For the most part though, you’ll be constructing things in your capital, and that doesn’t need a heroes’ presence to accomplish. Neither do the province improvements.

So far, you’re probably thinking this all sounds very reasonable, and it is – Eador’s strength is that the world is very interactive. The conquer provinces aren’t just resource boosts – they have their own character and mystery, and it allows you to do things other than expanding for the sake of expanding... but the turn-based nature of the game can lead to two almost game-breaking occurrences: Things can get very boring, very quickly, and things go really badly, really quickly.

Sometimes, you’ll have conquered as far as you can before provinces become too difficult for your heroes current level. To be honest, you don’t want to expand too quickly anyway, as left untouched provinces can get upset, even rebellious, so exploring them and tackling the mini sites is key. This can lead to a period of just clicking ‘End turn’ because you’re exploring to find sites that are manageable (Dragon’s Lairs, for example, are best left for top level heroes). You’ll also need to send your hero back to the castle periodically, either to repair equipment or replace losses, and considering the average hero can only move one tile per turn, it can take a while. Granted, you can build structures in the provinces that can help you do some of this, but these structures are expensive and in the early game you’ll have plenty of other things to spend your money on. In essence, things can just get really boring for a period, as it takes so long to get things done.


The other half of the problem is that things can crumble really quickly. If you don’t manage your economy right, you can be struggling for money for a lot of the game. This will stop you building better buildings, getting better troops, and more importantly, getting more heroes online (the more you have, the quicker things become) which typically get more expensive with each hero. The wrong decision early on can have a ripple effect, leading to a lot of things going wrong all at once – your provinces could start rebelling and, being poor, you can’t spend the money needed to remedy that. An enemy hero may start cutting a swath through your lands, and if you don’t have your own armies in the right place, they can easily just cause chaos. You can hire provincial garrisons to stop them being walked over, but you can only recruit one per turn. Essentially, things can just collapse, and it’s not a question of loading to a previous save and fixing things. When things go wrong, they go very wrong, and it usually results in you having to start the shard again. Even on the tiniest of maps, that’s several hours of gameplay down the toilet.

Perhaps making it turn-based was the only way this game was going to work. In all honesty, forgoing the campaign mode and jumping straight in a skirmish might be a better proposition. Being restricted in terms of buildings, troops etc... only adds to the boredom factor on the earlier shards, but in a custom game you have no such restrictions. Eador is certainly challenging, which is to be applauded to some degree, but we can’t help but feel basic design choices hold it back as an experience. Perhaps they’ll be some way to fix this, perhaps not, but anyone looking to pick this game up should know they are in it for the long haul. The long, grinding haul.

Despite the fact that things can go wrong really quickly, when things go right, it’s actually all rather satisfying. Winning an especially tricky tactical battle is especially rewarding.

Perhaps making it turn-based was the only way this game was going to work. In all honesty, forgoing the campaign mode and jumping straight in a skirmish might be a better proposition. Being restricted in terms of buildings, troops etc… only adds to the boredom factor on the earlier shards, but in a custom game you have no such restrictions. Eador is certainly challenging, which is to be applauded to some degree, but we can’t help but feel basic design choices hold it back as an experience. Perhaps they’ll be some way to fix this, perhaps not, but anyone looking to pick this game up should know they are in it for the long haul. The long, grinding haul.

Despite the fact that things can go wrong really quickly, when things go right, it’s actually all rather satisfying. Winning an especially tricky tactical battle is especially rewarding. 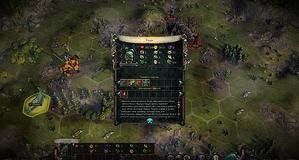