Bullet hell, but not at its finest

Combining the features of a tower defence game with a top-down aerial shooter, Excubitor boasts an exciting plot caught up in bullet hell crossfire. Set in 2182 in a remote star system, the game focuses on a powerful element, known as Voidshards, which is said to have the potential to provide humans with all the energy they will ever need. You are a pilot, in charge of the SST-77 Hammerhead - a prototype combat ship that can be constantly upgraded - and it’s up to you to blast and defend your way through the star system. It all sounds very promising, until you actually play the game. 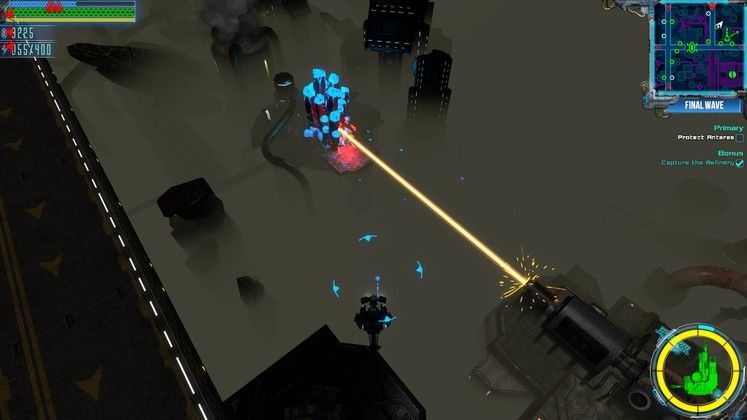 Offering seventeen upgradable weapons, the Hammerhead can be customised to your liking. Whether you prefer the continuous fire from machine guns or intermittent missiles, the Hammerhead can be equipped with two main weapons of your choice, tailoring the gameplay to any player’s style. Unfortunately, I soon realised that although some weapons appear to be particularly useful at a glance, you can progress through the game rapidly just by spamming the first weapon that you are given. When equipping and upgrading weapons, Excubitor will notify you of cool down times, range of fire and a number of other terms that should impact the gameplay when playing a shooter. However, in practice, you can continuously fire throughout each level and notice very little change in your weapons accuracy. Upgrades make a noticeable impact but with the weapons already working well for long periods of time, these just make the game even easier and in turn, quite boring. 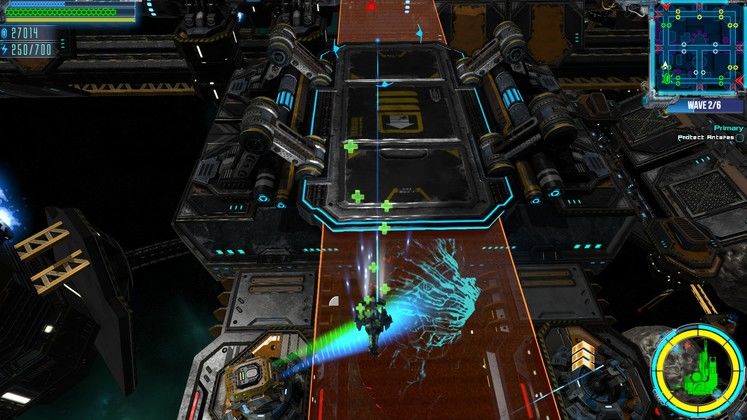 A large portion of the game also relies on turrets. You will gradually unlock more turrets as you progress through the game and you will want to place these on platforms close to the area that you are defending. It will be your responsibility to protect the Antares (a science vessel that is incredibly weak on its own) so the turrets are pretty much essential for this part of the game. Later on, you will also have to protect multiple points on the map at once. Tesseract Interactive have mentioned that to master the game, you will have to concentrate on three main concepts: Offense, Defence and Resource Management. Each new area will require a new strategy and will depend on you to perfect your timing for each of these concepts. Achieving this balance can be quite tricky at points but if you use all that is available to you, it’s not too difficult. Go in all guns blazing with no back-up from the turrets and you’ll sacrifice Antares and be forced to start over. Spend all of your time defending Antares in a boss fight and you’ll never defeat the boss. I found that keeping one eye glued to the map made it easier to know where to position myself. Although, even with big red arrows warning me where enemies would spawn, some of the levels featured unnecessary moments of pressure when over six clusters of strong enemies would attack the vulnerable science vessel, depleting its shields in a matter of seconds. 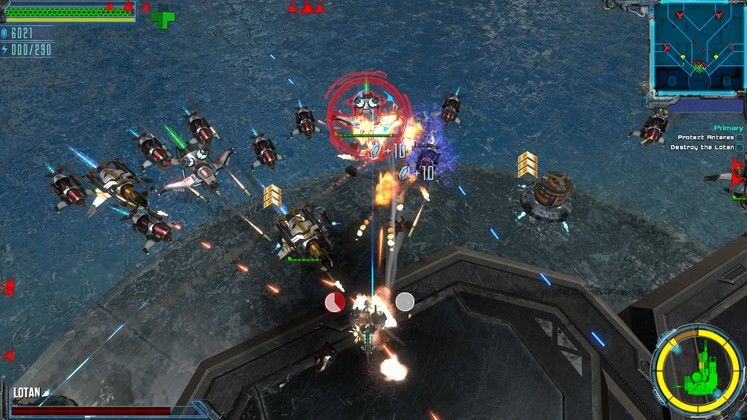 This leads me to another complaint regarding the Antares ship. When fighting a boss, you can take out some of its defences and weapons to make it easier to attack. These parts of the ship will only be temporarily absent from the boss ship and will regenerate to their full health after a short interval. On the other hand, the Antares (armed with a couple of weak machine guns) cannot be healed and is instead expected to withstand waves of enemies, plus special attacks from the boss. Early on in the game, this is not a real problem but later on, it can end a level very suddenly. Hovering the cursor over the Antares created a green border around the ship but there was nothing that you could do past this. Consequently, I am unsure whether there are options for upgrading the ship’s weapons or healing it – they certainly did not exist in the review build. When you defeat a cluster of enemy ships, they will drop a power-up which will keep alternating, depending on how long you wait to retrieve it. Some of these power-ups are useful such as the one that increases the speed of the Hammerhead’s movement, whereas some appeared to have no effect in the game at all. The main issue that I had with these was that the cycle in which they alternate often felt too long. In some of the boss fights, I found that it was actually faster to die and respawn than it was to wait for the health power-up to appear. This rendered the power-up pretty much useless at points and with the only downside being a slight delay as the ship respawned, it didn’t feel like much of a punishment. 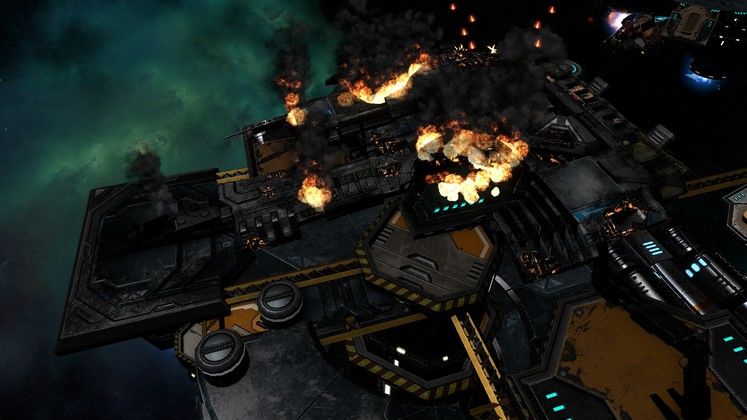 Moreover, Excubitor can be played on three levels of difficulty labelled as ‘Normal’, ‘Hard’ and ‘Insane’. On its Steam Page, Tesseract also refers to NewGame+, describing it as the hardest game mode they have ever created. They also encourage players to replay levels in order to achieve the highest score possible so completionists will be happy to hear that a gold rank awaits them, after all their hard work. I played the game on Normal, which started off very easy. Normal levels generally stick to the same structure: a number of waves of enemies, following the same pattern of entry on the map and the same attack. As you progress, more varied enemies are introduced and additional quests will appear on the screen, so if you want to complete them all in one run, you’ll have to manage your time very closely. After you have completed each cluster of levels, you will engage in a boss fight. Overall I found that the beginning of each normal level was quite interesting and fun to explore. Encountering new enemies and destroying landmarks on the map was quite enjoyable, but this feeling quickly evaporated when five more waves of exactly the same thing followed. The increase in difficulty between the normal levels and the boss fights also felt far too steep. Boss fights are supposed to be challenging but in Excubitor, they felt unnecessarily drawn out, with the bullet hell atmosphere just making the level more irritating to endure. 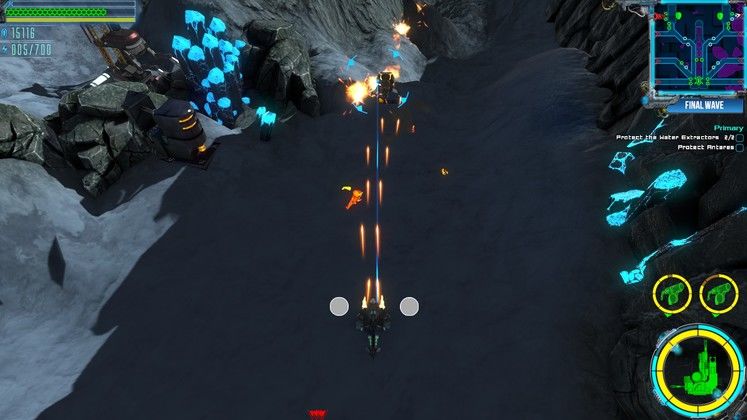 Furthermore, the game can be played on either keyboard and mouse or a controller. I tried playing the game on both and they seemed to work reasonably well, most of the time. However, I did have one problem whilst trying to purchase turrets on the controller. As you would expect, Excubitor implements a wheel system to purchase and upgrade the turrets. When trying to select these using the controller, the wheel frequently got stuck and stopped me from being able to select the desired turret. For now, I would advise players to use a keyboard and mouse for this game, but this is a small problem and could be rectified by the time the final version of the game is released. 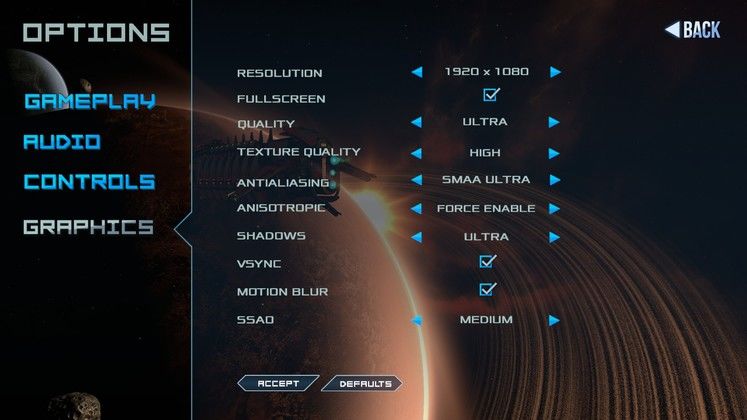 The game ran reasonably well on my PC (GTX 980; 8GB RAM; i5 4460) on the maximum settings however, there were a few moments when it momentarily froze and at one point, the game crashed completely. It’s important to note that I was playing a review copy of Excubitor and this problem may have already been fixed before the game’s release. Considering that this is a bullet hell shooter and there are points when there is a lot happening on the screen, the game did not appear to struggle too much. I also encountered a number of bugs, one of which rendered the first boss pretty much impossible as it stopped taking any damage from my weapons. Again, this has probably been fixed now but this greatly affected my experience at the time. Nonetheless, wherever you are in Excubitor, the environment looks interesting and when you’re engaging in dogfights with enemy ships, it’s very easy to feel immersed in your surroundings.

As a tower defence shooter hybrid, Excubitor has the potential to be an adrenaline-charged, strategic masterpiece. However, a number of aspects have let the game down and this left me feeling disappointed. Some of the levels felt repetitive and unnecessarily drawn out. Boss fights were often frustrating; not in a way that spurred me on, but rather a way that made me want to turn off the game and play something else. The story didn’t really seem important and was very easy to forget. Even so, Excubitor partially redeems itself with its assortment of turrets, weapons and upgrades. As you progress through the game, more mechanics are introduced and some of these add an interesting spin to some of the levels. With a number of difficulty modes to choose from, Tesseract have also really tried to cater to everyone’s needs. I feel as though my experience of Excubitor was tainted by one of the main bugs that I mentioned earlier. I spent hours trying to fight a broken boss that could not be beaten and this drained a lot of positive feeling from my experience. Unfortunately, the rest of the game did not make up for this and I found myself feeling a mixture of boredom and frustration for the duration of the play-through. 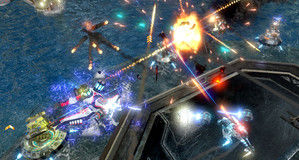