The revolution finally spreads to the PC

It’s been just over half a year since Fable III released on Xbox 360, which was also when the PC version was due but then Lionhead Studios pushed it back to work on what they feel desktop gamers want and need – has the PC revolution taken hold?

Perhaps you’ve already adventured through Albion’s latest period of strife? I have, but I still couldn’t keep myself from wanting Fable back on my PC where it truly belongs ever since those Lost Chapter days of the original game. Obviously the biggest change is the overhaul of the game to fully integrate the keyboard and mouse, although the Xbox 360 controller for Windows feels just as at home as well. Truth be told I found myself using a hybrid of the two at times as the mouse always gives the edge for accuracy, while the controller keeps interacting with the game world a breeze.

A feature Lionhead added with Fable III on PC will make smile anyone who likes to really give thought to their actions and the consequences in RPGs that love playing the morality card. Save slots are now included and are accessed through the Sanctuary which replaces the more traditional pause screen or options menu. They’re handled through the Game Management option under the menu you can bring up once in the Sanctuary – you access it through an interactive wall display. The save slots occupy a room similar to the wardrobe does in the Sanctuary were manikins represent each save game. You can also just opt for a quick save.

The visual settings for the game are a decent bunch and let you tweak some of the finer points. If your PC rig has the power then Fable III looks great on a nice high resolution with all the trimmings. I also enjoyed reduced load times from the Xbox 360 version which is a given advantage of the PC over a home console. As Games for Windows Live is integrated it works seamlessly just like it does for Xbox 360 so Live users who know other PC Fable III owners can jump in for some co-op fun with the added bonus of not needing a Gold Live subscription, i.e. free multiplayer.

For anyone who has played Fable III before then you know how arduous it was to become a land baron – snapping up all property to become the de facto ruler of the land before even setting your sights on the throne of Albion. Fortunately Lionhead has relented to fan feedback and granted perhaps the greatest wish of all. A ‘Repair All’ button now graces the main map view which will either repair all your rent properties throughout Albion or just all those within a region your viewing. Before each home had to be selected one at a time to be checked up on and then repaired which effectively killed any enjoyment out of, arguably, a great staple of the franchise.

The PC version can also been cheeky in that it has benefited from all the launch day gripes, bugs and other weirdo glitches being ironed out from the Xbox 360. That having been said there are still areas that will soon grate your last nerve; the dog. Don’t get me wrong I love the bundle of canine loyalty we get as a constant companion; the problem is he’s a dog. He’s an AI dog.

Sometimes he gets stuck in the oddest of places or, having found a ‘dig spot’, he’ll get stuck running around in a loop for a bit before the game breaks him out of it and sends him trotting over to the buried loot. That’s the problem in having the player rely on such a mechanic, particularly when that player is a completionist such as me who wants the land pillaged of all valuables to fund my Hero. At first I felt guilty at wanting to kick the pixel pooch when this starting happening, but now I found myself just wanting to shoot it, and lacking any guilt at the thought. Here’s hoping that if Lionhead sticks with the dog companion then they work out how to make him genuinely better.

The relationships within the game are sadly lacking too and haven’t improved much over Fable II. While they did get rid of the people falling head over heels in love with you just for keeping stall prices and rent low, now it uses a system that feels hollow and cheap. You basically get stuck with doing the same interactions over and over with little choice as to what you want to do. You unlock packs along the Road to Rule which gives you bigger selection of expressions but what’s that good in that if you can’t just select what expression you want when you want?

Once the dog has been upgraded to his maximum charisma level then getting NPCs to be friends, best friends or lovers with you is relatively easy – or it would except for the extremely repetitive fetch, courier or escort tasks they saddle you with. As I mentioned I am a completionist and so if there’s a quest available I generally want to undertake it but having a bunch of these cookie cutter run around jobs gets old fast. Beside campaign NPCs - which are all fantastically voiced and brought to life by very English persons - the villagers are devoid of interest outside their one-liners; their lives are boring and barely a notch above a static existence.

Despite these drawbacks to the mechanics of Fable III, the world of Albion still has a crazy amount of charm with nooks and crannies to go exploring and spelunking, although the lack of maps within a region can make said exploration a tad difficult sometimes when you can’t for the life of you figure out how the heck to get to a certain area of a cave to loot another silver key or chest. The new continent of Aurora is a real highlight of the game thanks to its environment and feel, and again, hopefully Lionhead will stick with the sandy old land and develop it even more in the next Fable.

The Limited Edition content is included as standard for PC Fable III which is a good way of thanking the PC crowd for being so patient while Lionhead kept plodding away. Their charity ends there though as we don’t get to have the released downloadable content thrown in as well. There’s plenty to enjoy with the vanilla experience of the game and thankfully it has more highs than lows to experience from start to finish. Some features like NPC relationships and the dog need to be given a thrashing at the brainstorming stage again. Combat remains one button for each of the three styles and I actually find it hard to picture Fable violence being carried out any other way now.


PC Fable III is clearly the superior when it comes to the Xbox 360 version, if you’ve the Windows machine to match its requirements. The keyboard and mouse are embraced with the game’s notifications and cues adapting on the fly to whether you’re using them or if you’ve stuck with an Xbox 360 controller for Windows. I hope Lionhead and Microsoft will be keeping any future Fable action adventuring closer together when hitting consoles and PC. I thoroughly enjoyed going back to Albion and can’t wait for more from Peter Molyneux and Lionhead Studios.

PC Fable III is clearly the superior when it comes to the Xbox 360 version, if you’ve the Windows machine to match its requirements. The keyboard and mouse are embraced with the game’s notifications and cues adapting on the fly to whether you’re using them or if you’ve stuck with an Xbox 360 controller for Windows. I hope Lionhead and Microsoft will be keeping any future Fable action adventuring closer together when hitting consoles and PC. I thoroughly enjoyed going back to Albion and can’t wait for more from Peter Molyneux and Lionhead Studios.

I could say being a land baron. I could say taking the throne. However the doofus duo of Sam and Max, once again, stole the show for me. 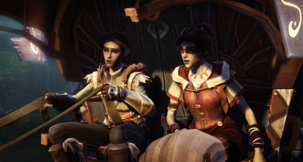 If Given The Chance, Peter Molyneux Would "...