From its grandiose opening to its annoying and unnecessary speed run conclusion, Dead Money's ride is very different to that of its parent game. Though it excels at creating an interesting and creepy atmosphere the gameplay mechanics irritate and ultimately fold this casino heist.

This first DLC doesn't rewrite the ending to New Vegas, so on loading up a previous save you'll receive a distress call from the Sierra Madre - a fabled pre-war casino that never opened thanks to the Bomb going off.


Upon entering you're given the standard Fallout greeting by being knocked out and losing all your precious possessions. With a groggy head and an explosive collar attached to your neck you awake to find yourself under the yoke of Father Elijah - a bearded crackpot who intends to use you and three other collar-clad explorers to gain entry to the casino.

Complicating matters are new enemies - the Ghost People - wanderers or old residents driven murderous by the toxic fumes that pollute the villa's dark streets. These deadly new foes are resilient to ranged attacks and require dismemberment to kill.

After these pleasant introductions you're charged with recruiting the other members of your heist squad and these individuals provide much of the interest to Dead Money. Dean Domino is the Dean Martin-esque performing stars of the casino, still possessing his suave charm as a Ghoul. There's a Super Mutant with two distinct personalities - one highly intelligent and the other a rampaging monster. And finally Christine, a tortured mute girl who holds the real key to unlocking the casino's vault and whose history has the most profound impact after you leave the Sierra Madre.

They're a fascinating bunch to roll with and spending time with each in turn unlocks their backstory and motivations. There's no side-quests in Dead Money, only ambient challenges, but this attention to your companions means there's enough detail to give you a break from the main quest and the gameplay.

And you'll certainly need a break because however different combat and exploration are in Dead Money, they get tedious fast. Fighting or eluding the Ghost People is an interesting change at first - the lack of weapons and ammo, with bear traps sprinkled liberally around the streets, turns Fallout into a survival horror experience.

Unfortunately that promising start falters quickly as you'll be sent back and forth across the villa streets doing RPG donkey-work that doesn't attempt to hide itself from plain view. The maze of passages and ruined buildings become a tiresome slog and by the time you've done all that's required to reach the casino, a wretchedly slow 4-5 hours will have passed.


For all my moaning this approach gives Dead Money a distinct atmosphere. Every corner hides a threat and with ammo being so scarce, it forces you to change your approach, compensating you with some deadly new melee weapons. But as cool as a bear-trap fist is, it can't hide the frustrating repetition the first half of the DLC employs.

Oh, and did I mention the loudspeakers and radios that can set off your collar? Yeah, thanks to its baler-twine construction many noise sources from the old world interfere with its operation. Linger too close to a radio or loudspeaker and the rapidly beeping collar will soon spread the contents of your head over the craps table.

This minor irritation soon ascends into player madness as many of these speakers are hidden and some, inexplicably, are invulnerable to damage. Rushing around like a possessed loon in order to outrun their range usually concludes by jumping into an enemies lap and their friendly bear-trap fist again. It turns that exploration part - the bit I love the most about Fallout - into a quicksave nightmare throughout. A disappointing design decision that takes most of the joy out of the post-apocalypse.

Inside the casino the narrative and gameplay play out a little differently. Security holograms are now the primary threat and these indestructible foes are best avoided completely thanks to their deadly laser beams. It means the gameplay becomes more stealth-orientated whilst the story begins to up its pace and come together. The most intriguing part of gathering this information is the over-arching theme that all the DLC promises to take. I won't spoil it here but talking to Christine reveals a story thread that goes beyond what Dead Money offers.

There's still a fair bit of legwork to do before you reach Sierra Madre's vault and the climax of Dead Money. Though the tasks are similar to that of the first section the opportunity for discovering the narratives nuances and minor details keep the interest going. And you'll need every scrap of information to make sense of Dead Money's conclusion as the main narrative is pretty lean when delivering answers.


Were it not for the final gameplay moments, which band together the irritating collar mechanic and a time-based level escape, I would recommend Dead Money for its atmosphere alone. But banding together the worst parts of the game for its conclusion leaves a sour taste in the mouth once you return to the Mojave wastes.

For all its Bioshock-inspired environments Dead Money falls short delivering on its premise. At 800 points for an eight-hour adventure it’s certainly value for money but when the quantity far outweighs the quality then this is one adventure you can miss. 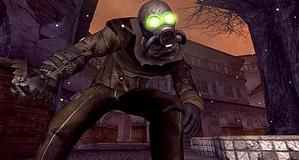