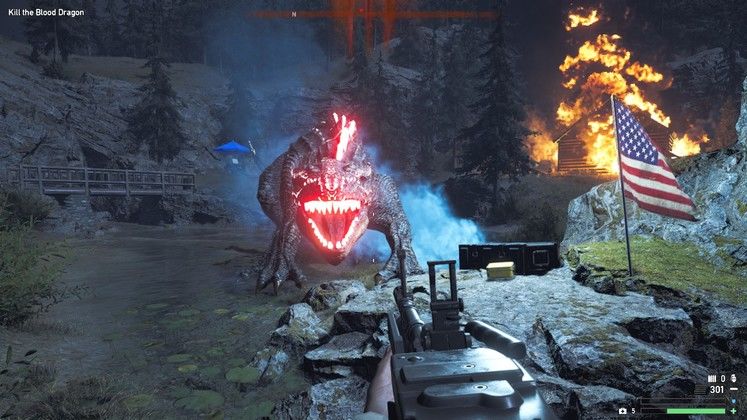 Far Cry 5 was flawed but we had fun with it, although the DLC has really been able to redeem the flaws. The first DLC expansion, the Vietnam-set Hours of Darkness, didn’t really add anything that wasn’t in the main game, and while the wacky outer space Lost On Mars adventure was far better it was a bit repetitive. Both at least boasted fresh new sandbox worlds for the player to explore, so had plenty of content.

Far Cry 5’s final DLC, Dead Living Zombies, doesn’t have either. It has little content and no new sandbox. It has seven very linear, very short episodes, that players are expected to replay for better scores. Fortunately all the Zombie stuff is available to Arcade map makers, since we’re going to be honest: we think they’ll do a better job. 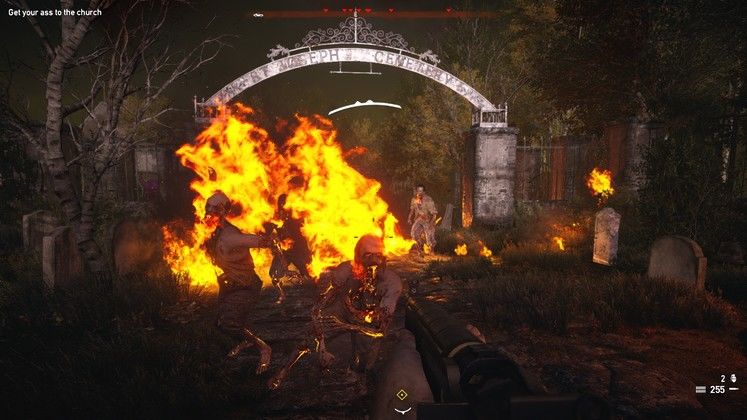 The conceit is that Guy Marvel, the guy you meet in Far Cry 5 trying to direct Blood Dragon 3, is pitching a series of zombie movies to a number of disinterested investors. You’re playing through his zombie movie pitches. It’s certainly a cute idea, and we have no problem with the idea of a more linear Far Cry. The last two episodes were sandbox open-worlds and they felt a bit empty, so a DLC concentrating on the action and the shooting might be fun.

The movie pitch idea also allows the game to basically change in front of you while you’re playing it, to accommodate Guy Marvel’s or the investor’s suggestions. This reminded us of Ubisoft’s fantastic and underrated Call of Juarez: Gunslinger, where the situation would change on a whim and suddenly the whole game is unpredictable. This is a great idea, but sadly Dead Living Zombies doesn’t make anywhere near enough use of it. 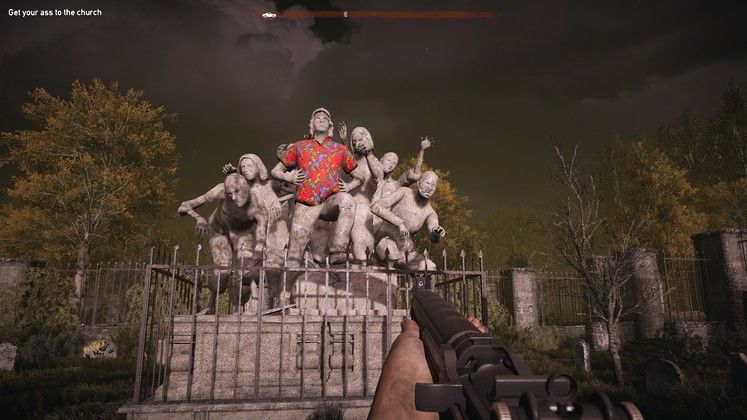 Which goes for the whole thing really. The idea was right there. There are human undead, canisters which spawn more undead, and zombie versions of animals from the main game, like bears, wolves, and even moose. Why couldn’t Dead Living Zombies be a Far Cry 5 version of Red Dead Redemption’s Undead Nightmare? Keep the same map as the main campaign (a smaller version), add a zombie plot, change up a few things, make the supernatural stuff actually pay off (Bigfoot! Haunted Hotel! It!) and boom - instant classic expansion. We would gladly have traded all three DLC episodes for that experience.

But it’s not fair to judge Dead Living Zombies based on what we wanted, so we’ll judge it based on what’s actually here: not much. We don’t mind the levels being linear, but they’re not that fun or imaginative either. A shoot-out at a church against gang members and the “surprise” appearance of a Blood Dragon (it was in the trailer) are the highlights, but honestly… there are so many exciting things you can do with zombie movies, or levels that can change in an instant based on the whims of the storyteller - we know, because Gunslinger was excellent. Dead Living Zombies doesn’t do any of these things. 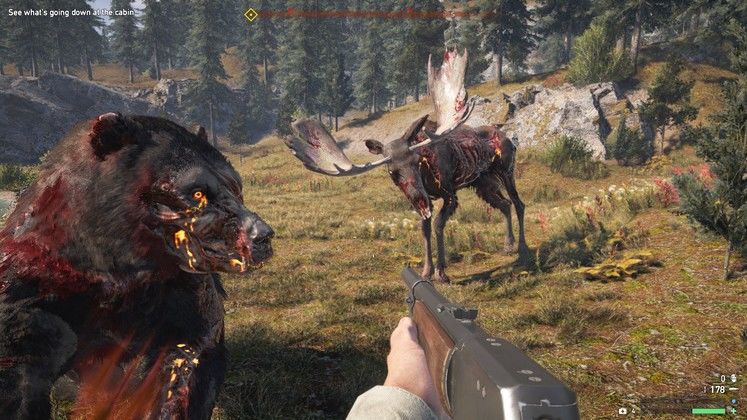 To top it all off, levels are short and have no checkpoints, so if you die at the end of a level you’ll be expected to play it all again. Despite the presence of co-op and score attack there’s honestly little incentive to play again. Left 4 Dead is far more imaginative.

Our system is an AMD FX-8300 Six-Core Processor, 16 Gb RAM, Nvidia GTX 1050 Ti 4Gb, and Windows 10 64-Bit, and it ran Far Cry 5 and Dead Living Zombies just fine in full settings. With no sandbox to support Dead Living Zombies is actually less stressful, PC-wise. It doesn’t look too bad either, but even in the graphics department we feel short-changed - it never feels like a crappy horror movie. And that’s what we really wanted. 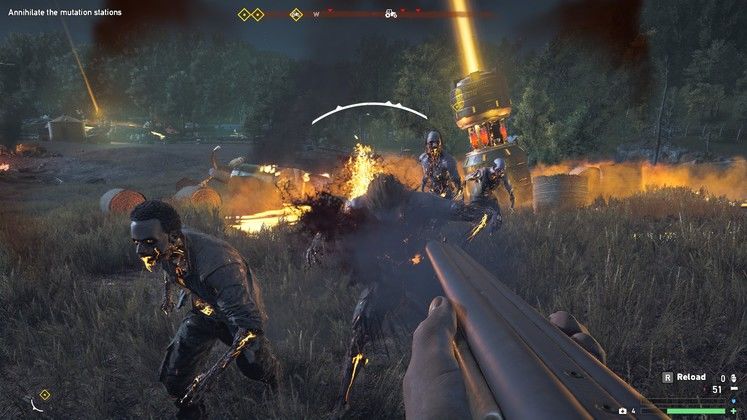 Far Cry 5: Dead Living Zombies maintains the level of general Far Cry 5 fun within a zombie movie setting, but does nothing really exciting with the concept. We have no problems with the DLC not having a sandbox world (although doing an Undead Nightmare with the main map would’ve been awesome), but the 7 linear levels on offer here are unimaginative, short, have no checkpoints, and could’ve been so much more. The idea of playing through terrible horror movies, which can change at any time Call of Juarez: Gunslinger-style, is fantastic, but Ubisoft wastes it. Hopefully Arcade map makers will do something with the concept, because this DLC is dead on arrival.

Whenever Guy Marvel or one of his potential investors decide they don’t like something and change it, right in front of you. Doesn’t happen enough, but it’s great. 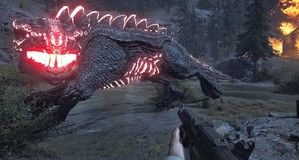