Short review: "no, the demo's not included"

Back in March Final Fantasy Type-0 HD was released on consoles. It did quite well, mostly down to the fact that it came bundled with a sizeable demo of the still-far-away Final Fantasy XV. Now at the end of August 2015 Square Enix has blessed PC owners with a port of the game, which may I remind you originally came out on PSP in Japan in October 2011. It does not include the Final Fantasy XV demo, so has to stand entirely on its own merits. Oh dear.

Short review: "no, the demo's not included".

The story can be summed up like this: I don’t have a f***ing clue. There’s great storytelling in Japanese anime, games, etc, and the Final Fantasy series is regularly at the forefront. Final Fantasy Type-0 however is anime at its absolute worst, the type that gives Japanese storytelling a bad name - especially in gaming. Long pointless cutscenes with no input from the player, excruciating and utterly unnatural dialogue, poor over-the-top voice acting, one-upmanship all-purpose magic powers featuring a lot of posing, characters who are impossible to care about with little to no personality (and you’re playing 14 of them at once!), and a little bit of sexism but honestly it’s to both genders.

It really is difficulty to work out what’s going on, or care. Supposedly it’s part of the same Nova Crystallis universe as Final Fantasy XIII and XV, but that’s not a good thing since that’s the least interesting and most exaggerated Final Fantasy world. Every sentence contains phrases like “Vermilion Bird Crystal”, “l’Cie Qun’mi”, “White Peristylium”, “Eidolons”, and other nonsense words. “l’Cie” is the one that gets on my nerves - it’s the worst kind of R.A. Salvatore fantasy naming. They are meant to be the most powerful creatures in this world, could Square Enix not have given them a strong, powerful name rather than just chuck a keyboard at the wall and see what keys break off? 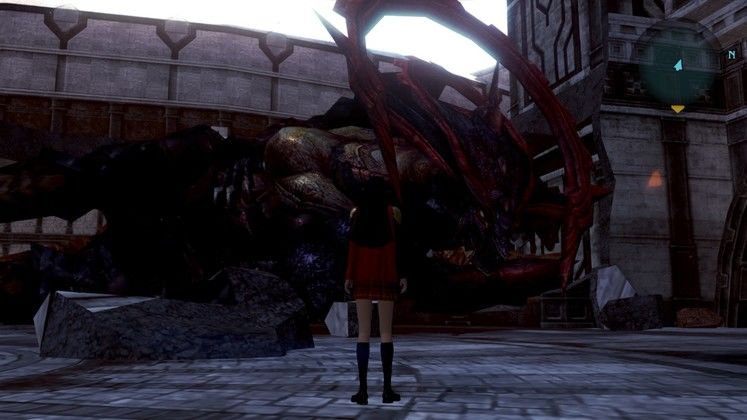 No, he doesn't hate dwarves and thieving hobbits

So, the story and all its millions of overlong CGI un-interactive out-of-place (but fortunately skippable) cutscenes isn’t much cop unless you have a high tolerance for rambling bollocks. Fortunately though the general setup itself is interesting and is at least moderately well handled. Basically your gang, the Agito Cadets, are the elite squad of a militarized version of Hogwarts, and all their magic powers are put to use in warfare rather than turning a rat into a lamp or levitating books. Surprisingly enough despite all the ridiculous monsters, giant rideable chickens and the f***ing Moogles Type-0 actually doesn’t flinch from showing the horrible parts of warfare. Every battle will leave plenty of dead bodies, and things can get pretty dark. Shame most of the rest of the dialogue ruins it, but still it’s appreciated.

What about the gameplay? Fortunately here things pick up, when you’re actually allowed to do something. There is some basic exploration in the (ugh) Vermilion Peristylium hub, where you can chat to certain cadets and do rather boring XP grinding tasks as long as you have time before your next mission. Various items can be bought from various merchants, but the shop system is awful - it’ll tell you if a cadet has a weapon equipped but it won’t say if the one in the store is better or worse than the one they already have. The map is pretty confusing too, and I have better things to do than wander around for hours hoping to spot an exclamation mark. You can also explore the overworld map too I guess, but bear in mind it looks and plays worse than Final Fantasy VIII on the PS1 and unless you’re riding a Chocobo you’ll hit an invisible random encounter every few seconds.

The main gameplay though is all-out real-time combat, which is supposedly similar to Final Fantasy XV’s (I wouldn’t know, I haven’t played it THANK YOU SQUARE ENIX). It’s all action, using a mix of straight attacks and up to three magical abilities to defeat all enemies. You have up to three cadets on the battlefield at any time and the player can switch between all three. When they get defeated new cadets can be warped in to replace them, but bear in mind that all of them play different. Some have melee weapons, some have ranged, and one poor girl just has a flute and is useless at anything but support (which makes her not very fun to play in a game without multiplayer or co-op). Some have close magic attacks, some have Cure, some have accurate long range lightning powers, some have slow moving but powerful spells… you have to really learn all the various strengths and weaknesses of the cadets if you want to succeed. 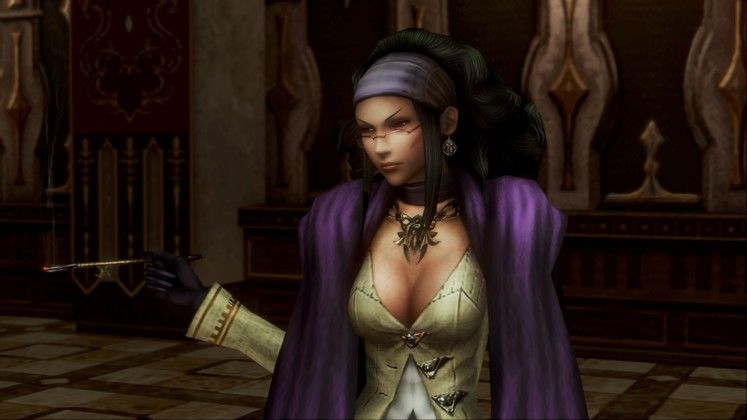 What especially needs to be watched for when locking-on (which is a must) is the red or yellow flash before an enemy attack, where they’re most vulnerable to a counter-attack that’ll do serious damage. You have to also move between enemies regularly, none of this “stay locked on an enemy until they’re dead” nonsense. It’s all pleasingly tactical, and I really like the strategic aspect of combat. Apart from a few duff characters though what lets the gameplay down is the annoying idea of “draining magic” from enemies after they die, which wouldn’t be a problem except you stay locked on to a dead enemy even when there are a dozen living ones still attacking! Furthermore the camera is atrocious and will regularly get stuck on scenery or block your view, and there’s no way of knowing where an off-screen attack is coming from if you’re locked on to someone (which you have to be).

There are also proper action-strategy moments on the overworld map which make a nice change of pace. You’ll have to manage troops attacking or defending various towns on the map. You get to choose what troops to send out (and you’ll have to pay attention to what the enemy’s sending, as certain troops are better against others), where to strike, and when to tackle objectives. Eventually when a town’s ready to fall you get to attack it outright, clearing the streets in the main action mode before taking on a commander boss - defeat them, and the battle’s won. It’s simple but quite fun, shame that this battle mode isn’t in the game more… but then that’d make this Final Fantasy Tactics wouldn’t it? 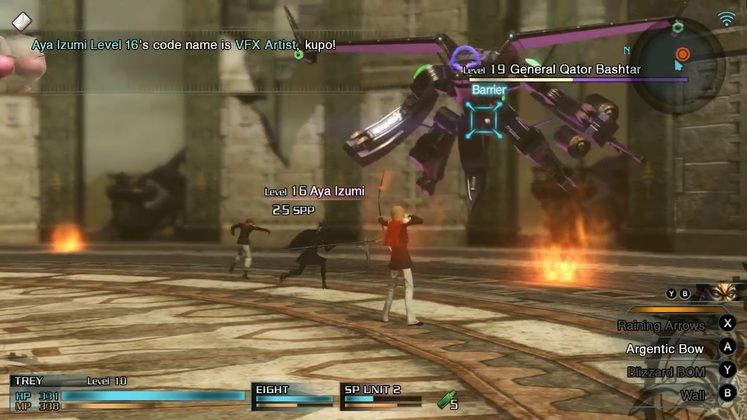 The combat is the highlight

It has to be restated that this an upscaled version of a PSP game. No, not PS Vita, PSP. You know, the portable system that was slightly less powerful than a PS2. Now available for £19.99/$24.99 on PC two years after the release of the PS4. This isn’t a slight (I just bought X-Wing Alliance from GOG and I’m happy), but do not expect mind-blowing graphics. They’ve been cleaned up a fair bit, but the overworld still looks worse than PS1 and doors look like they should be in the original Resident Evil mansion. Again, not actually a problem, except that areas are tiny and you’ll be seeing loading screens every few metres which is a real pain.

The music and sound design, at least, fares better than the graphics or voice acting. Composer Takeharu Ishimoto has worked on the Kingdom Hearts games and most of the side Final Fantasy games, and while he’s no Nobuo Uematsu all the tracks are really good. Plus he isn’t afraid to reference music from classic Final Fantasy titles such as the distinctive Chocobo theme that’s been in most proper games in the series. Indeed with the Chocobos, Moogles, classic music and many returning monsters Type-0 almost feels like a Final Fantasy love letter. Shame about the terrible story.

For the most part the gameplay of Final Fantasy Type-0 HD is great fun. The combat has some camera and character problems but is otherwise enjoyable and nicely strategic, and the action strategy overworld moments are a highlight. I’m not so sure about the exploration, side quests, Chocobo breeding, etc, especially with the tiny areas and many loading screens, but it’s mostly optional stuff barring the loading screens. The trouble is though, the gameplay is not the major part of the game. It’s the story, and the many long non-interactive cutscenes that often feel out-of-place next to the PSP-quality graphics. I enjoyed the “military wizard’s school” angle, but otherwise the story is utter nonsense, badly told, badly acted, badly written and/or translated, and changes scene so often I never knew who was fighting for what side. There are no interesting or relatable characters and I found myself skipping most of the movies after I just couldn’t take it anymore. There are things to like about Type-0 once you get past the boring beginning, but unless you have a high tolerance for really bad anime or are a desperate Final Fantasy fan you might want to skip Type-0.

The sweet classic victory jingle at the end of a boss fight. Like every Final Fantasy game.