What was the last game you played where you felt the audio was an inextricable segment of its whole? Where the sonic accompaniment wasn’t just a stylistic flourish or a means to create a mood but a crucial part of the game’s logic? To some degree, sound is an oft-overlooked and perhaps under-explored facet of video game design, playing second fiddle to aesthetics and the mechanics of interaction. Fract OSC subverts expectations by making the aural component of its puzzles the primary mechanic, requiring you to hone in on every shift in pitch and change of melody. It’s a conceit that will doubtless divide opinion.

Fract isn’t a game for the light-hearted – that much becomes manifest within the first twenty minutes. The game commences with a self-contained tutorial, of sorts, that finds you illuminating three monolithic towers that luminesce in different neon hues (blue, green, red) upon completion of simple command prompts. As it transpires, these colours correspond to specific parts of a synthesiser (bass, pad and lead) – a theme that persists throughout.


Following this preface, you’re thrust into Fract’s central arena – a sprawling expanse of fluorescent shapes, abyssal chasms and coruscating rocks. Despite the explosions of primary colour emanating from its arcane geometry, this is a cold space – both in its inhumanity and its foreboding nature.

With no direction to speak of, instinct suggests that you should set out and explore, forging a path down its sloping caverns. What quickly becomes apparent, however, is that Fract’s internal logic runs counter to traditional video game syntax.

Early on you’ll find yourself wrong-footed by the inescapable allure of glowing wireframe globes and twinkling rocks scattered across the terrain. What would constitute signposting in most other titles is just embroidery in Fract – the furniture of an unfamiliar realm. On more than one occasion I found myself leaping onto ledges to investigate an object, only to discover that I couldn’t interact with it, was now trapped, and had no choice but to plunge into the void so I could respawn back at base.

Going into Fract blind it’s easy to approach the game as such, scaling the map in a similar vein to open-world adventures like Proteus. You’ll soon realise this isn’t the developer’s intention – the initial sense of scale is but an illusion, existing only to flesh out a limited number of interactive spaces. Nevertheless, when you do chance upon your first puzzle room, Phosfiend Systems’ vision begins to materialise in all synaesthetic splendour.

Fract’s universe is an abstraction of a synthesiser. The cerebral tests distributed across its surface, (once solved) serve to kick-start machines that bring it back to life, which in turn unlocks different synth effects that can be tinkered with in the Studio – a separate mode where you can channel your inner beatmaker.


These puzzles arrive in three different flavours depending on the synth type (and hence, colour). For the pad synth (green) you have to rotate a series of platforms to channel a beam of energy into a central core. For the lead synth (red) you’re required to move blocks into a designated slot by switching between vertical and horizontal planes. And for the bass synth (blue), you’re faced with a wall of dials, knobs and levers, which you have to tinker with in order to complete a circuit.

As you manipulate the environment the musical score adapts accordingly. Your actions mediate the pitch, shape, speed and melody, presenting auditory clues as to your state of progression. Upon conclusion of the brainteaser, this dynamic composition swells to a crescendo of thuds, beeps and clicks, before revealing the final puzzle: a synthesiser that requires a specific input pattern to activate.

This is where Fract can get a bit frustrating. After finishing some of the harder synth patterns, the overriding feeling that engulfed me was one of relief not satisfaction. While the audio feedback nudges you in the right direction, you’ll typically find it devolves into an unintuitive game of trial and error as you attempt to decipher the correct combination of bars on the digital display. The difficulty isn’t the problem; it’s more that the actual process isn’t as engaging – and hence, rewarding – as the puzzles that precede it.

However, there is one exception: the visual pointers in the bass synth puzzles present Fract at its best. Four sliding shutters – that flip open when you input the corresponding note on the synthesiser – stand between you and the end goal. By balancing the emphasis you put on each note and the timing of each input, you can engineer a small window of opportunity to dash under the shutters. This interplay between the visual and aural elements is instinctual and gratifying and, crucially, doesn’t feel laboured.

Conquering four preliminary puzzles in each area paves the way to a fifth and final conundrum. The trick to decoding these is through subtle clues gleaned from the environment. Given the early precedent set with the lack of freedom, it’s not obvious that you should’ve been taking notes on the game’s architecture. As such, I was flummoxed by these for some time, wandering around aimlessly until I stumbled across a recognisable diagram hovering in the distance.


Each success brings a new gadget to play with in the Studio. This mode lets you craft your own music using similar effects to those employed by real electronica producers. It’s entertaining enough, but with no grounding in electronic theory you’ll quickly exhaust all the available options. In saying that, the tool definitely has scope to be an interesting distraction for those well-versed in synthesisers, although I’ve no idea how faithful a recreation of the real thing it is.

Perhaps, as a neophyte of this quirky brand of puzzler, I came into it with the wrong mentality. Maybe I didn’t reconcile my existing video game preconceptions with its warped logic quickly enough. But Fract failed to truly excite beyond its gorgeous aesthetic.

At its best, Fract is a wonderful celebration of a videogame’s capacity to ignite your senses. At its worst, it can be a downright chore.

At its best, Fract is a wonderful celebration of a videogame’s capacity to ignite your senses. At its worst, it can be a downright chore.

The unexpected crescendo of light and sound upon solving your first puzzle. 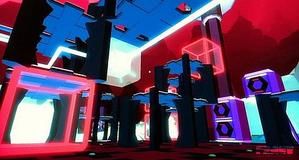