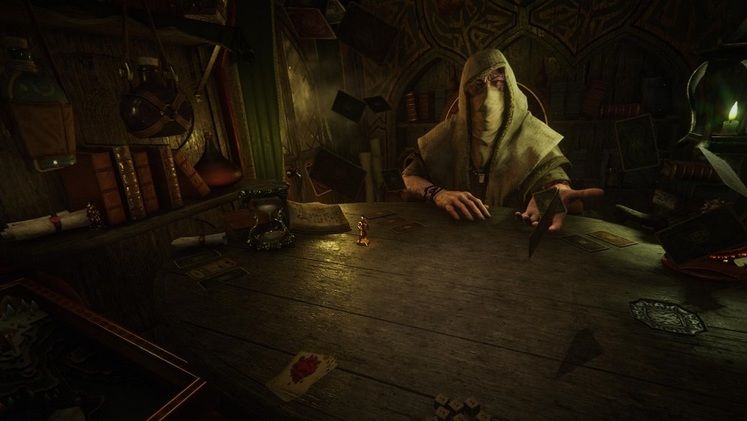 Back in 2015, Defiant Development introduced players to Hand of Fate. It was a video game that combined card game, roguelike, and action-roleplaying game styles into one interesting and enjoyable combination. A couple years later, Hand of Fate 2 puts you in the shoes of a nameless player character that comes to sit once again at the table of the Dealer: A mysterious man who engaged you in a magical card game, narrated its events, and would eventually become your final adversary in the first game. The Dealer invites you to play a new Game of Life and Death, this time to become his apprentice and challenge a new threat. Hone your reflexes and gather any luck charms you’ve got because Hand of Fate 2 offers a diverse array of new challenges that will take the best of both if you want to win the day.

After some light character creation, the Dealer introduces players to the rules of the game. Hand of Fate 2 offers a series of challenges that are each set out as an arrangement of face down cards. The player must traverse the arrangement, revealing encounter cards that offer scenes resulting in treasure, misfortune, mini-games of skill and chance, and combat. The player must tend to their health, food (which will lead to losing health and eventually death if you run out), gold for buying supplies and getting the better of situations, and fame points that allow for the wielding of better gear. Winning a challenge allows the player to earn cards representing encounters and gear. These can be slotted into the player’s deck in new challenges to increase their odds of success as the Dealer uses a blend of the players cards and his own in each scenario. 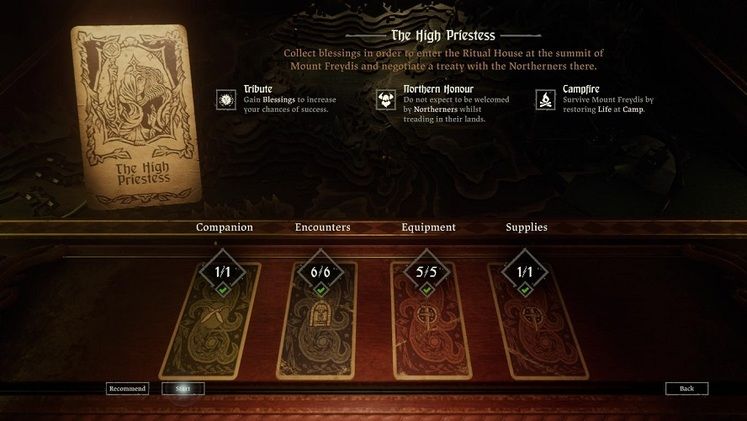 There are various different changes to the Game in Hand of Fate 2 that diversify difficulty and ease. Instead of merely traversing floors, challenges are full blown scenarios based around various factions in the game’s world. Sometimes players will help Empire soldiers fend off an undead plague and other times they will fight against that same faction or others. Challenges all have a unique set of rules that favor various aspects of preparation, strategy, and luck. One challenge finds you wounded right from the start and a few bad cards can end your challenge quickly, but the good news is that you go right back to challenge selection and can pick up any journey again from its start immediately.

If these new scenarios weren’t enough, there’s also a huge emphasis on how you face failure and success in Hand of Fate 2. Success checks in the original were determined by a 4-card shuffle followed by a player choice to determine the outcome. Hand of Fate 2 brings more chance mechanics to the game by way of dice, a spinning wheel of cards, and a swinging pendulum. Rolling a high number, stopping the wheel on the right card, or hitting targets on the pendulum are constant among the encounters alongside the original card shuffle. Moreover, some challenges favor one chance game or another and some equipment cards can alter these games to make them easier. Hand of Fate 2 offers a great deal of options to prepare your deck and try stack the odds in your favor, but the game often feels downright brutal in how often random chance and misfortune hinders you. That said, when the tides turn and odds come out in your favor, it feels glorious to arm yourself to the teeth and overcome a challenge with a run of good luck. 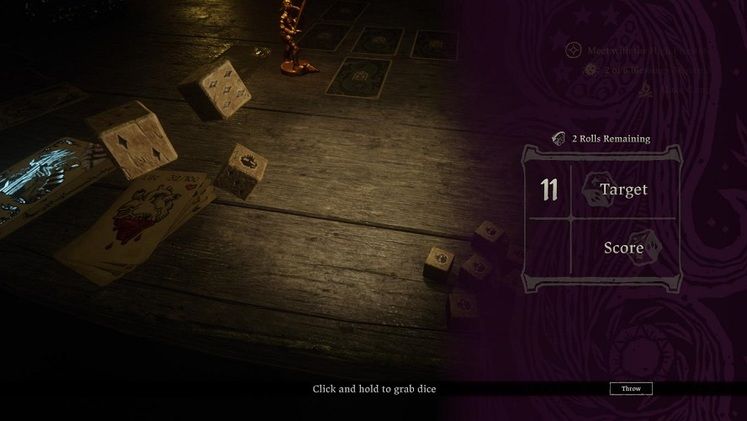 Of course, you will need to gear up properly to survive. Occasionally encounters draw enemies that take the game to mini arenas where you must fight foes. Enemies are often various mixes split between Empire soldiers, barbarian Northerners, swift thieves, plagued corrupted, and undead. Each faction has a number of different contenders and trying to just brute force through them will find you dead quickly. It’s on you to hone your reflexes and find the openings for attack, defense, ripostes, and critical hits that will best dispatch your foes while keeping your own damage to a minimum. While you might see similar common villains a lot, Hand of Fate 2 does a fairly good job of mixing up enemies to keep players on their toes alongside some special unique encounters.

Fortunately, Hand of Fate 2 also adds some helpful changes to combat to help you get ahead. The most notable is companions. Some challenges allow you to meet special characters and gain a companion card of them to equip as an ally in many of your challenges. There are four companions, each with their own combat perks and an activated skill that can turn the tide of battle. One is a magician who casts ranged fire balls and can activate a magical barrier on your character that will eat one enemy attack. Meanwhile, a soldier you collect later fights by your side with melee and can launch a combo that is capable of setting most any enemy up for a quick finishing move. 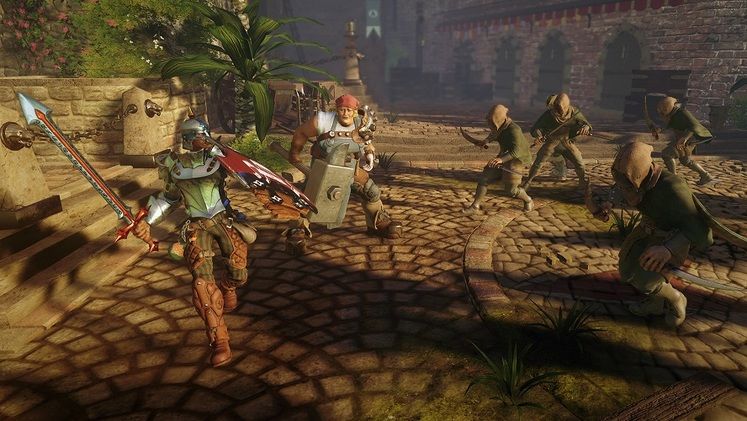 To make things more interesting, each companion has a quest line of encounter cards with their own personal stories and scenarios that will upgrade their combat abilities if you can conquer them. They also each specialize in one of the chance games out of combat to improve your odds, such as the barbarian offering you an extra die if you fail to reach the successful number in a roll. In this way, not only do they help add a lot of flavor to combat, but if a challenge favors a certain chance game, bringing certain companions can be the difference between victory and defeat.

Hand of Fate 2 doesn’t just leave all the fun to the companions though. Equipment in the game has been reworked with new cards that actively change up the way you approach everything. There are three main weapon classes in the form of heavy weapons like axes and hammers, light weapons like dual clubs and daggers, and a sword and shield combo, and each of these play different enough. However, Hand of Fate 2 also offers a treasure trove of cards featuring unique armor and helmets, shields, weapons, and accessories. You might get a sword that can stun all ranged opponents in the arena with its finisher or armor that gives you extra food when you acquire anything else in encounters. Each piece of gear adds a unique wrinkle to your progression style and slotting the proper gear cards for any given challenge can have a huge effect on whether you succeed or fail. 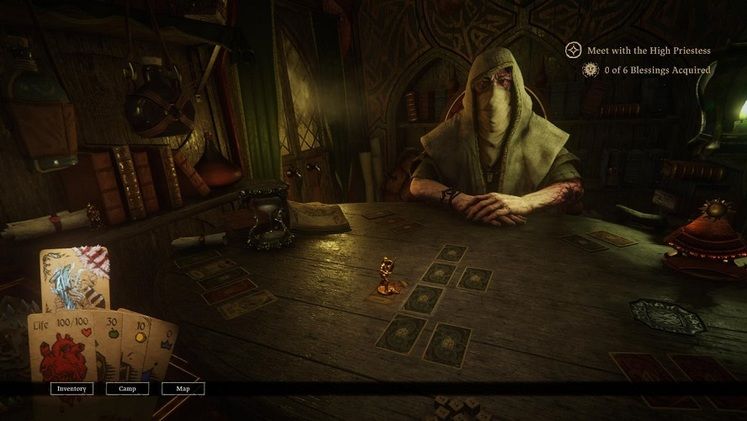 Of course though Hand of Fate 2 gives you the tools you need to win as you go, it’s not always forgiving, especially at the beginning. The massive amount of chance checks for success or failure in encounters mean almost all of the challenges hinge on some level of luck. This is still a rogue-like in what encounters you come across and when you have few cards or companions to nudge luck in your direction, it feels like the odds are absolutely stacked against you. A few bad rolls or steps into unfortunate encounters can send you back to the beginning in a hurry and coming to the end of a challenge only to be thwarted by luck can feel crushing. More cards mean more opportunity to control your fate, but at the end of the day, a lot of it is luck of the digital draw.

Moreover, though combat feels fair for the most part, there are a few hitches here and there that can make crucial engagements frustrating. Sometimes you run into situations where enemies interrupt their own animations to suddenly strike you with little chance for escape or counter. Other times you might run into situations where two enemies strike you at once and you can only counter one or risk being hit by both. It doesn’t help that your companion, while generally reliable, will sometimes get stuck on fighting a dead enemy if you step in and kill said enemy before they do, making them loop on attacking a corpse. While combat is generally a short and sweet rendezvous, when everything else depends on luck, losing even an inch of life to these problems can feel like complete sabotage. 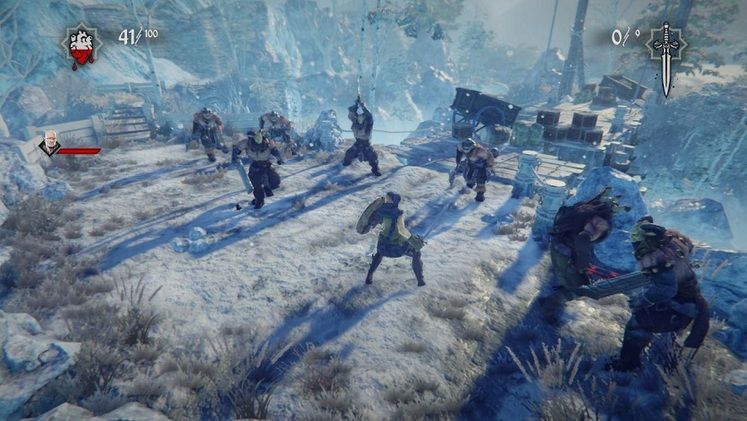 There are two distinct halves of Hand of Fate 2 and both of them are presented admirably. When you’re at the Dealer’s table, the flourish of cards is smooth and beautiful and the designs on each card are a genuine joy to discover and observe. Combat is the more expansive area and each arena, yourself, your companion, and the opposition are well done. Combat in Hand of Fate has always been compared to the Batman: Arkham games and that level of smooth grace continues here. It’s not without problems - Sometimes finishing move animations play out in weird positions with your character jabbing their sword into the space near an opponent’s face while their head jerks back in phantom destruction or sometime enemies hit you with attacks from distances that shouldn’t connect because you didn’t dodge or parry. These points aside, combat is still a visceral and generally enjoyable dance that rewards swift reflexes.

The original Hand of Fate took a lot of different styles of gaming and brought them together successfully to make something really unique. Hand of Fate 2 improves upon nearly every aspect of the original, providing diverse new challenges that help build the world around the Game of Life and Death. The new scenarios, the success checks that come with them, the companions, and new encounters and gear cards all add hundreds of unique touches to the game that make every card flip an experience. Meanwhile, despite a few small flaws combat is as smooth as ever with the new weapons and companion abilities allowing players to find their own preferred way to dispatch the wide array of opponents they come across. Luck is a fickle mistress and this game isn’t shy about stomping out your quests like a merciless tabletop game master in any part of your endeavors. That said, Hand of Fate 2 rewards the determined and stacking the deck in your favor to overcome its challenges makes this quest well worth the effort 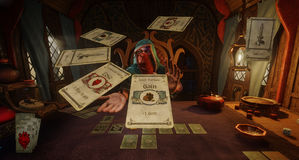