Have you noticed how game varieties appear to come out in groups - this ‘season’ it looks like space strategy is all the rage with titles like ORB, Treasure Planet, and Imperium Galactica III. Hegemonia is another of the group that appears to be completely overlooked in the game shops for some reason - it’s there but you do have to look for it. 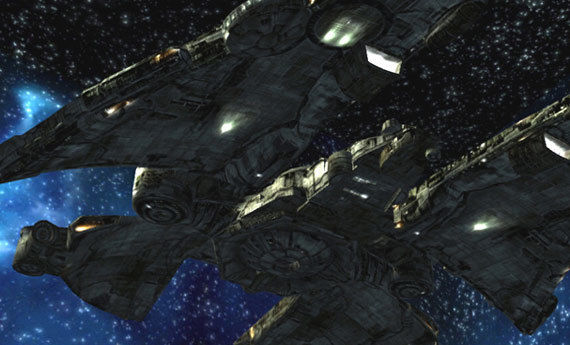 The plot starts off with a war between Earth and the newly colonized but technically superior Mars (the intro screens set the scene perfectly), and you can choose just which side to play. After only a few missions however, the war ends & the game continues on with the same levels no matter which faction you initially controlled. Having put its house in order, the humans are now faced with new alien contacts to investigate & overcome.

As with the majority of strategy games, you need money to develop; in Hegemonia this is accrued via planetary taxes, mining & intergalactic trading - it sounds complicated but is actually virtually transparent. Colonize a few planets/moons, set the tax level via the slider (only really necessary to raise if you are in serious financial difficulties), build a few merchants and then basically forget all about it & just watch the money roll in. It might need a bit of tweaking for a few levels but that’s about it. You can also build mining ships & garner resources from the local asteroids but, unless specifically instructed to do so, there really is no point in going down this avenue. A minor difference with Hegemonia is that the amount of military units available to you are severely restricted by your rank. You may only be allowed to build 7 ‘fleets’, where a fleet can be a squadron of 7 fighters, or 4 corvettes, 2 cruisers or finally 1 battleship - it takes some getting used to but does work rather well inasmuch as you have to think & utilise any fleets to best effect - throwing fighters at cruisers/battleships just doesn’t work, they get shot to pieces by the superior firepower. 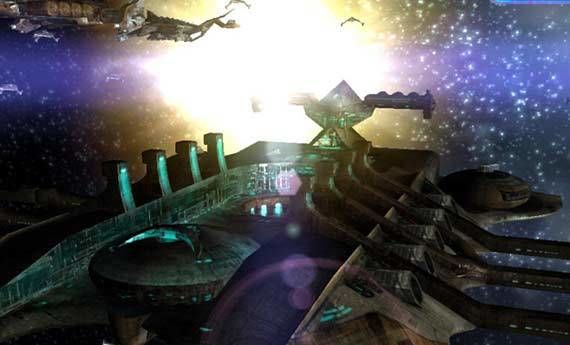 Units are identified & controlled (mainly) from the 2D (really 3D) screen. Here you see the icons representing your ships as well as all the features of the particular system - planets, radar range circles, asteroids, dust clouds, jump gates etc. Selecting any particular unit or planet brings up a ‘unit’ window top right which can be drilled into for more detail and a right click on any of your units pops up a small control window, allowing you to select any special actions available. The vast majority of the game can (& probably will) be played from this screen, only using the ‘full’ 3D mode to view the visually stunning battles and to follow any particular unit to its destination. While in 3D mode, a selection of banner windows at bottom left allow you to instantly select any units (no matter where they are) & see at a glance what state they are in & whether you have built the maximum allowed. This is also the screen required to see any relevant ‘important’ messages.

Battles are, to a large extent, AI controlled. It is possible to allocate separate groups to attach individual targets (and even target specific section; weapons, hull or engines) but, unlike Homeworld, control is so fiddly it really isn’t worth the effort. You CAN move any units through all 3 axis, but it is so much easier to just right click on the target & let them do it their own way. When besieging planets, keeping one unit ‘spare’ to destroy the enemy fleets being built is always a good idea, and, again, can be just left to ‘get on with it’ as actually conquering a planet takes up a lot of game time (the speed up options definitely come in handy here). 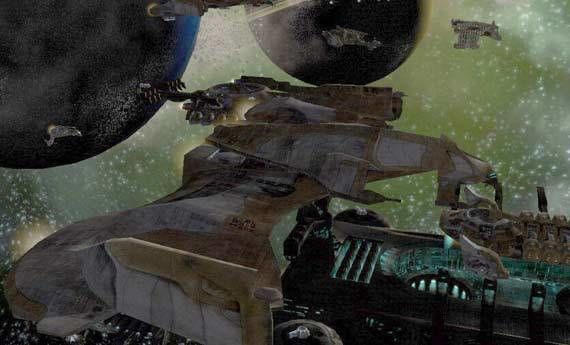 There are 3 races involved in the campaign mode (& each can be chosen individually in the multiplay/skirmish mode) - Human, Kariak & Darzok. Each specializes in their own weapon type & has distinctly different ships. Humans master the Protons, able to blast through shields with relative ease; Kariaks use Ions to achieve the same effect, whereas the Darzoks use the Quantum weapons to destroy all in sight. All races have access to Missile technology (generally the best for planetary assaults), but, it has to be said that the humans have the edge as they can research all the weapon types & use them wherever necessary while the other races stick to their own preferred type.

You are allocated a certain amount of research points each mission, and choosing just what to research is, in general, completely up to you (there are odd scenarios where you cannot utilise your points until told to do so). Deciding just where to allocate your research is you main concern - developing a chosen weapon type ‘to the max’ certainly helps, but is not much good to you if you haven’t researched your economy tree enough to garner the money needed to build your ‘kick ass’ ships. The research screen is quickly accessed via F5 and gives you an enormous choice of what to develop. You can drill down further to see a pretty dev screen with icons & lighting flashed resource paths, but TBH, that’s about all it is good for. As stated earlier, the research points for each level are finite (unless you get a lucky ‘random event’) and, quite often, the bit you really need to research only shows up near the end of the level so it can be wise to make good use of the ‘save’ facility. As soon as spies are available, they can be used (when they have enough experience) to try & ‘steal’ technologies from the other races which can benefit you big time. 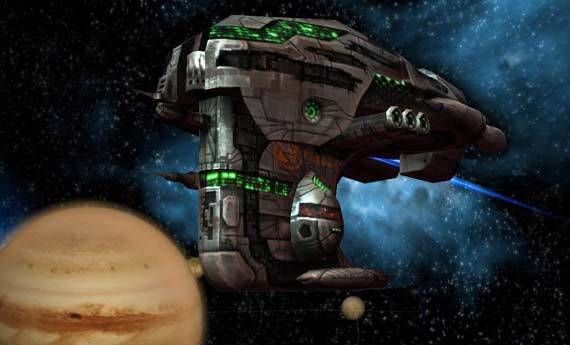 Sounds for the game are adequate, though the battle effects appear to be overly muted. Main character voices all come complete with a mix of dubious accents, making some of the speech somewhat less than easy to decipher (but you have the text to read as well). The music is of the orchestral variety and ‘does what it says on the can’, but is also generic - the same music used for each race.

The continuity of the single player campaign seems a little suspect. Having spent a few hours colonizing every available location & building a phenomenal economy, the next level could see all your newly colonized planets either owned by ‘the enemy’ or just not colonized at all. To a large extent, you only have to do whatever you are instructed to, which can often lead to a scenario ending just as you are really getting into it L. You can also be left floundering for ages trying to locate/destroy a single unit just to trigger the scenario end and missions involving large scale occupation of alien controlled planets can literally take hours & hours due to the relatively slow pace of any planetary sieges. 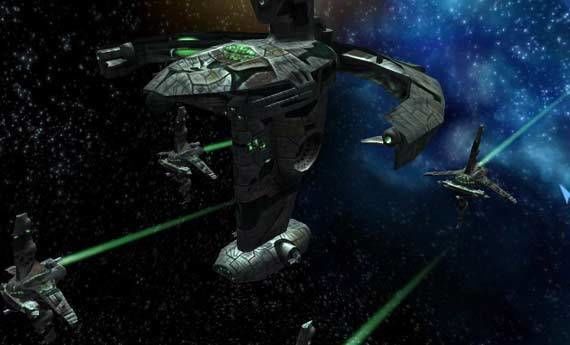 Multiplayer (skirmish V the AI) is incredibly hard, even on the easiest settings. Economy is the top priority &, once you have managed to develop a stable one & the money is rolling in, the enemy is often knocking at your door with some top of the range battleships when all you have to fight back with are a few fighters & a couple of corvettes. After a goodly struggle the game often devolves into a stalemate situation, as you can never quite get enough ships in the right place at the right time. Realtime multiplay is fairly well supported, although the games are often one sided, drawn out affairs - although not much chance of a ‘rush’ due to the unit limitations.

How often have you bought a game from a shop purely on the fantastic art work depicted on the box, & then been disappointed when getting into the game itself? You have no worries on that score here - what you see IS what you get. It is the graphics that set this game above all other contenders at the moment - they are superb. Explosions are suitably violent, with the wreckage crackling and glowing for a few moments after the total destruction. Each races ships are instantly recognizable, and the effects of the differing weapon types impacting against the shields/hull or even planets is a jaw dropping experience - and all with virtually no sign of slowdown even on my trusty ol P3- 500. Planets change with terraforming and the orbital views show realistic cloud/volcano/water & landscape patterns. Cut scenes are more like a cinematic experience and definitely worth watching. All in all, outstanding!

Overall the game is visually stunning and eminently playable. Although the sense of being ‘on rails’ tends to leave you feeling slightly flat after all your hard work in one scenario is just wiped clean on the next, this is still a game that is a necessary addition to any space strategy nut. 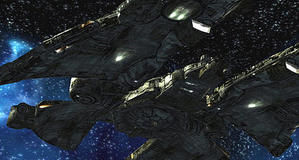 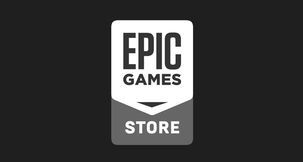