I am Setsuna Review

JRPG’s have told some of the most memorable and compelling stories in video games. Chrono Trigger, the Final Fantasy series are remembered with great fondness by all who played them. Tokyo RPG factory, a studio created by Square Enix was told to capture that fondness of the classic JRPG and produce something new. That project has now finally been released.

I Am Setsuna tries to capture that nostalgia which holds classic JRPG’s in such high regard. Setsuna is a love letter to games like Chrono trigger with many mechanical similarities as well as narrative ones. The games title directly translates to I am sadness which is the theme of the game. 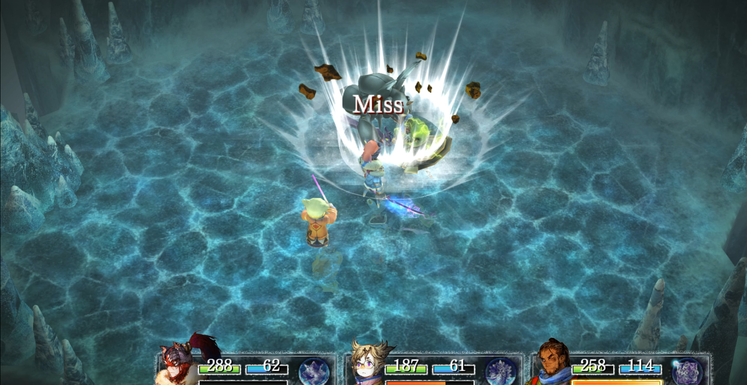 Setsuna’s story places the player in the role of Endir, a young man from a masked tribe of mercenaries infamous for carrying out any mission with cold detachment. Endir is sent to kill the sacrifice, a girl who gives up her life to stop an onslaught of monsters from destroying the world. Endir and the Sacrifice, also named Setsuna, set out to complete her journey after Endir chooses not to kill the girl.

Setsuna is completely top down in both exploration and combat. You travel via the world map from location to location. Each location whether it be a town, frozen lake or a giant ruin tends to be a linear affair. While there are chests to find, they don’t often stray from the beaten path. Some locations require backtracking and some occasional puzzle solving, but there is a distinct lack of variety and flair when it comes to the level design itself. 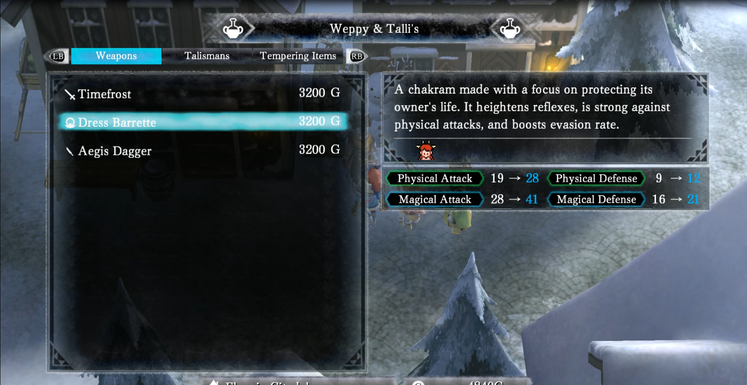 When you’re not reading text or running around looking for a fight, you will be fighting. The bulk of the game is contained within the combat. Setsuna’s combat uses an active time battle system that will be instantly familiar to fans of the Final Fantasy series. After each action is taken by a character in battle, an ATB gauge must fill again before another action is taken. The game has the option for the battle to be paused while selecting an action or have time continue leaving the party open to attack while players select an action.

Characters can use techs which is essentially a name that both abilities and spells fall under. Techs are learned via specific stones known as spirtnite stones and can be equipped and unequipped as you see fit. This means that most characters’ tech lists are completely changeable. Some techs can be combined with other characters’ techs to preform combos that can deal powerful damage. 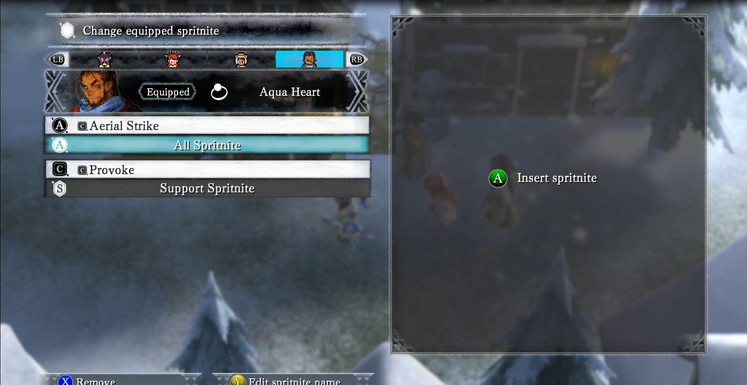 Unlike more traditional static JRPG’s, Setsuna’s combat has a positioning tactical element. Abilities can move the party members and enemies around the battlefield. This in turn can directly affect area of effect abilities and spells, for example it can mean that a aoe healing spell may miss a party member too far away. While the positioning aspect does offer an extra layer of depth to the combat there is a major drawback. Other than abilities, there is no way to directly affect where your character is positioned while enemies can actively move their positioning. This can cause a great amount of frustration especially against enemies who self-destruct.

Once a character ATB gauge fills up a momentum gauge starts to fill. Momentum is a timed feature in combat that can be activated alongside attacks that can have multiple effects such as extra damage, healing and more. 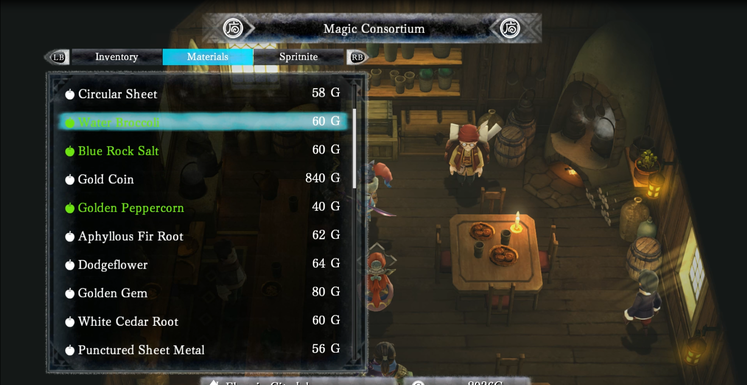 Overall combat works well and has a nice design to it. It can however become repetitive rather quickly. Boss battles occur fairly frequently allowing the challenge of the game to remain constant however the frustrations of the positioning system can cause unnecessary deaths.

Outside of battle, towns offer respite and is the only means of item, tech and equipment progression. This is where the game falls short in many regards. Selling and buying items is a huge pain as you can only sell your unwanted loot to a single merchant instead of all of them. This leads to having to needlessly trek back and forth to different vendors. 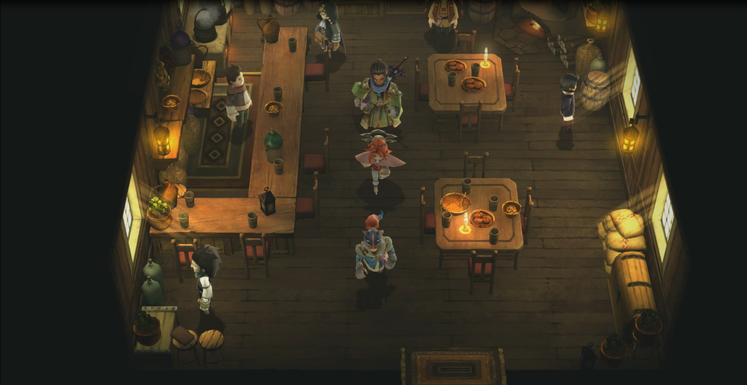 To obtain new abilities you must sell monster loot in the right quantities to obtain the spirtnite you want. It is a system again, that can lead to frustration when you don’t have the right ingredients, which can also have a negative impact on certain character progression, leaving you underpowered in terms of abilities for your current area.

It is hard to understand why potions, spirtnite stones and equipment can’t be looted from monsters and chests. While some chests do contain talismans that effect the amount of abilities you can equip and weapons, these are few and far between. The whole item system causes an artificial time extension that seems backwards, unnecessary and boorish.

I Am Setsuna was developed using the unity engine and contains a unique art style that is wonderful and works very well with the setting. The game is not particularly taxing on any system which leaves the question; why are there so many loading screens?

Setsuna is filled with loading screen after loading screen for no apparent reason. The game runs well and the world itself shouldn’t be hard to load in a matter of seconds and yet any area transfer causes a loading screen. 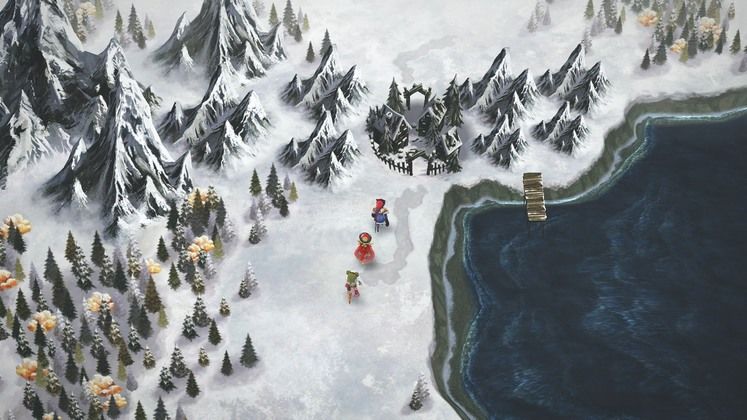 Tomoki Miyoshi’s piano based musical score is probably the most stand out part of the game, aesthetically speaking. The beautiful piano tracks create the majority of the atmosphere and allow for the story to really shine through. The game has no voice acting other than Japanese battle voices and the story itself is all text based.

Setsuna’s story lacks any real original flair and its storyline and characters feel more like a mash up of previous JRPG’s. While it is an overall well told story it lacks that certain draw that stops it becoming monotonous. 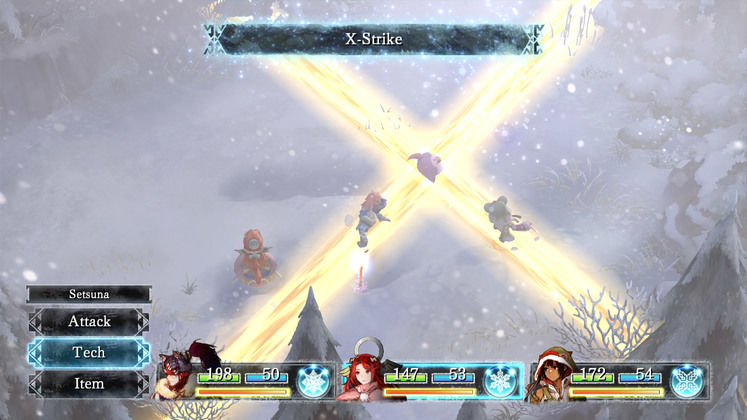 While the game has its flaws it remains a well-executed JRPG that does capture a certain nostalgic feel to it. It’s a solid title that fans of the genre will certainly enjoy and employs a good balance between quality and quantity.

I Am Setsuna is currently available to purchase on Green Man Gaming for £26.99.

I AM SETSUNA VERDICT

Setsuna is a good game and that’s really the problem, it’s just good. The games intention of being a love letter the to JRPG’s of yesteryear have kept the game void of any originality and spark. The game is stuck in the shadow of those games, playing it far too safe to rear a head of its own.

I am Setsuna Essentials 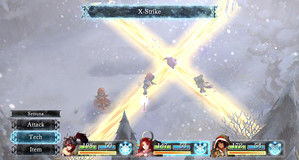