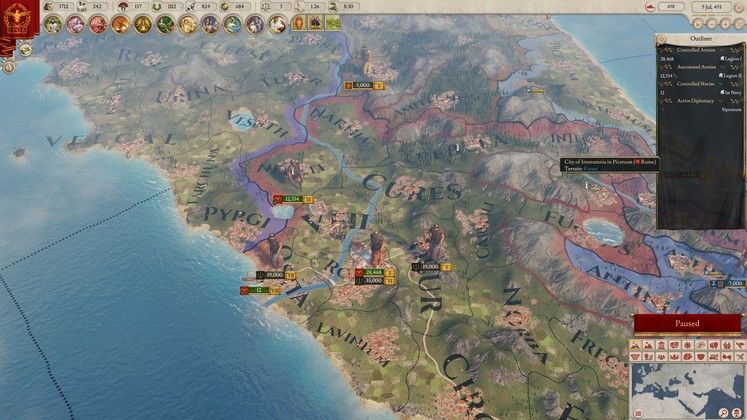 There’s something fascinating about Rome. From the unmatched military performance that successfully assimilated all of Europe to the governmental and cultural legacy that lasts until these days, the Roman Republic and the Empire amaze and shaped the life of billions. It’s scale and complexity makes for a fantastic setting for large scale strategy games, and Paradox is finally tackling the period and giving us another valid alternative to the two amazing Total War: Rome entries.

This is not actually Paradox’ first foray into Ancient Rome, but it’s the first since it rose from a small Swedish company to an international publishing staple. It is also in many ways its best portrayal of the period, thanks in large part to the polished engine and the team’s experience, though it is by no means perfect – it repeats many of the mistakes that plague every Paradox grand-strategy game for a decade and adopts some of the misguided novel decisions that have ruined Stellaris over the last couple of years. 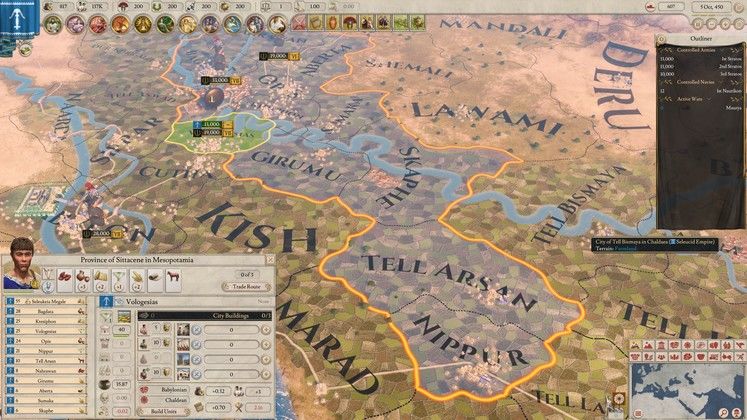 We’ll start at the beginning, namely 304 BC. The Second Samnite War has just ended, leaving the Roman Republic as the most powerful state in the Italian peninsula. With the Etruscans to the North, Samnites to the South, and Carthage, Egypt, and the Greek States far away, Imperator sets the stage for a sandbox experience.

The map is actually quite big, stretching from Britain all the way to China. Russia, India, and most of Africa are “impassable terrain” and quite clear earmarked for future expansion – as is most of China and maybe even Japan itself – but the scale of the map is initially daunting. You’re able to zoom all the way back from a coloured abstract view to a close-up, detailed glimpse of every city and army, creating a surprisingly immersive environment. The sea, clouds, and terrain are all extremely pretty – miles above what EU4 and the older CK2 ever accomplished – resulting in a beautiful playground with a lovely colour palette. 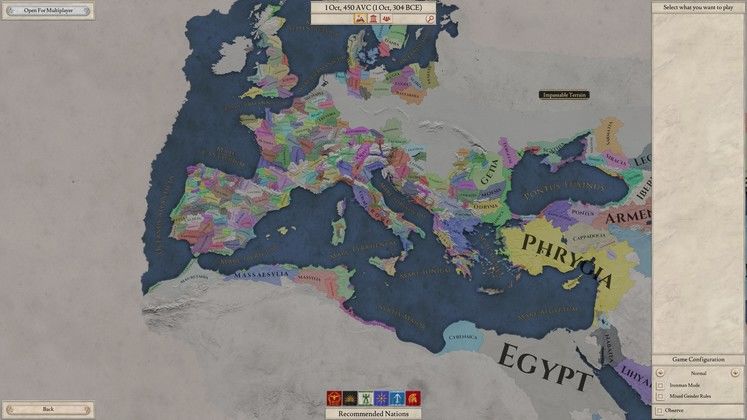 The most important thing about that scale is that you’re able to start your campaign as any of the hundreds of factions in the map, from the petite Ulutia in Ireland all the way to the massive Seleucid Empire in Asia. Imperator tries it’s best to differentiate cultures and their three form of governments – Republican Senates, Monarchies, and Tribal societies – including historically accurate people, positions, and soldier types. Even events are tailored, meaning Maurya starts mid-war negotiations with the Seleucids while Greek States get embroiled in the Wars of the Diadochi due to Alexander’s death.

As it is expected, most of the non-major players can feel almost like placeholders. The focus of the game development was obviously around Rome and its immediate neighbours and relationships, but a lot of it feels like its setting up the board for major expansions down the line. The lack of charm is one of the main things that stands out – despite having to deal with Senate support and being constantly bombarded with pop-ups of characters interacting, Imperator never really manages to capture the feeling of Roman society. The mechanics of a functional game are here, but the mechanics of Rome sure as hell aren’t – I never felt like I was actually engaging with the Roman Senate, or pulling the kind of moves or schemes that made Cicero and Caesar so famous. 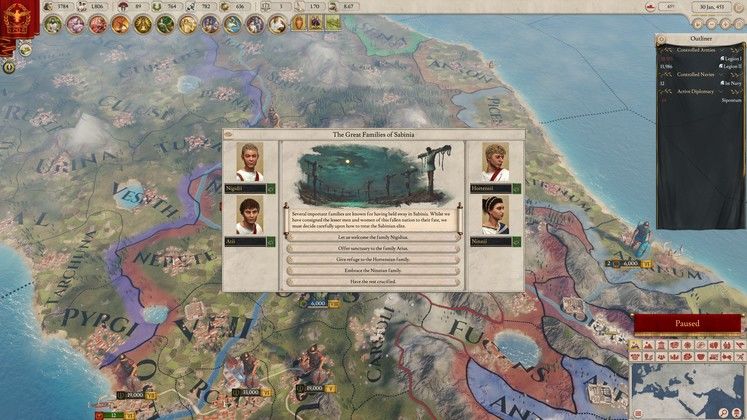 Part of the comes from the slight obtuse way in which interactions are handled, often allowing or omitting options without any explanation. As consul, I can order the imprisonment or banishment of any individual – either with the Senate’s approval or by forcing it through tyrannical actions that may backfire or be stopped – but I am unable to help a friend get married. As a general, I start the game with standing armies inside the Latium province, and get to freely march whole legions into Rome, making it virtually impossible to ever cross the proverbial (or literal) Rubicon. It is a game that gets Rome the same way a historian does, but fails to recreate it with any real heart or soul.

That lack of immersion is counterpointed a bit due to the game mechanics, which tend to be very comprehensive in some parts. You get several measures of national power, from treasury and stability to oratory power, and everything in between. Some of those are very important, while others are virtually useless – almost any option requires oratory points, but military power is only useful in very high quantities as means to unlock traditions. It’s hard to not feel more could have been done with the large amount of currencies Imperator currently has, but it all feels a bit void at the moment. 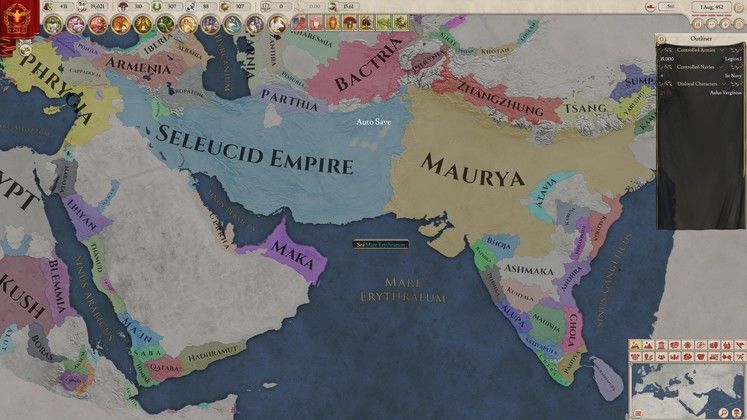 However, one of the biggest issues of the game is something that has been plaguing Stellaris since day one, and a massive failure on Paradox’ belt: diplomacy. Among other things, the Swedish developer has an unrealistic obsession with casus belli, forcing it into every one of their games whether it makes sense or not. It didn’t made sense for talking mushrooms in space, and it doesn’t make sense here – Ancient Rome was an era without internet or global bodies, ruled mostly by personal significance and your power to convince the people; I don’t need an internationally approved reason to conquer Thracia, I just need to do it and get my people to kinda be okay with it.

Relationship between powers are also weirdly restrictive. The game has an interesting idea of separating nations based on their size, resulting in local, regional, and greater power among others, but it stops alliances and some forms of interactions between them without ever offering alternatives. It also continues Stellaris’ senseless requirement that diplomacy can only happen if the AI gets at least 1 point out of it more than you, basically forcing players to deal with things through war when a much more interesting diplomatic option could be reached. 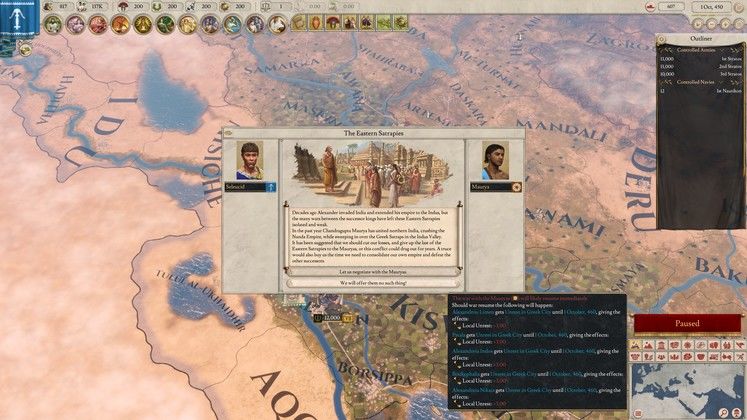 Similarly, interpersonal relationships – arguably the bread and circus of the game – are strangely lopsided. You can choose to try to make friends with specific individuals through an interaction that generates a series of pop-up events. In the current balance, it seems impossible to befriend anyone without spending half your national treasury and status by picking the “large” and “moderate” effect options, which not only reduces any propensity to initiate friendship actions, but also wastes all of your resources when the very fickle AI decides against it anyway. Even worse, there’s no actual impact to having a friendship in the game – aside from a minor loyalty buff per month, everything else from successor backing to government support was virtually unchanged by the relationship even after years.

Imperator is very big game, both in scale and depth, and Paradox’ track record does give hope that most, if not all of its problems can be fixed. The game does feel more like a tabletop game without all the pieces in than a proper finished product, but as a tabletop map, it is damn good. The quality and potential are certainly here – all it stands for us to see is if they will actually get fulfilled this time.

A very Paradox game, in both a good and bad way. It has all the hallmarks of a good game, and I look forward to seeing continued development as time goes by.

Imprisoning a political opponent with ambitions to become the next ruler, liberating him from said prison, imprisoning him again when he developed ambitions to have a government position, taking all of his money, scorning his family, then freeing him and watching as he loses all ambitions for life. It was at this point that I gave him the position he wanted all along (I’m not evil, it was a test playthrough to see how far I could push character interactions in a tyrannical way)